The export figures for watches valued at over CHF 3,000 have always been something of a mystery. Now, for the first time, this crucial sector of Swiss watches is decrypted in detail.

The export figures for watches valued at over CHF 3,000 have always been something of a mystery. Now, for the first time, this crucial sector of Swiss watches is decrypted in detail.
CONTENTS

Each month, the export statistics published by the Federation of the Swiss Watch Industry (FH) remind us that the sector comprising wristwatches priced at more than CHF 3,000 continues to grow. Indeed, in 2014 it represented two thirds of the industry’s total exports in terms of value, with less than 6% of the total volume.

This trend excites the enthusiasm of some, the concern of others, and widespread speculation. Indeed, there is very little accessible data on this subject, as the official statistics treat it as one homogeneous block, the notorious ‘over CHF 3,000’ block.

For a number of years we have conducted regular analyses on this elusive category, with a view to improving our understanding of it and consequently making better strategic recommendations to our clients. Understanding the structure, volumes and markets of this segment is indeed vital for anyone working in the sector – brands, retailers, agents and distributors alike. In a Europa Star exclusive we reveal some of the essential elements of our analysis, covering six years’ evolution in the market.

By dispensing with the traditional official classifications it is possible to establish a new distribution model for exports based on their value. It comprises four roughly equal major categories, which in 2014 each represented between CHF 4.6 and 5.6 billion. 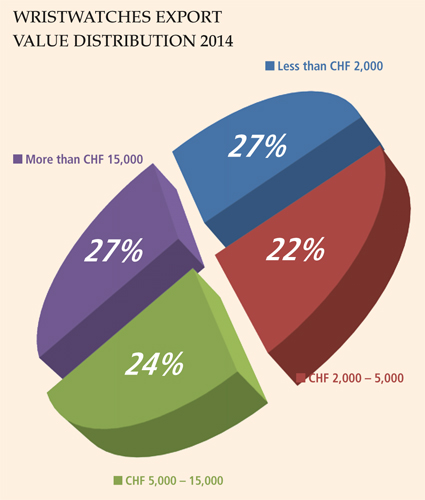 With value distributed evenly, the difference in export volumes for each of these price categories is inevitably quite striking. Export volumes for wristwatches are split into two equal parts of approximately CHF 10 billion with, on the one hand, 27.5 million units at less than CHF 5,000 and, on the other, 620,000 timepieces at more than CHF 5,000. More telling still, the value of the 175,000 watches worth over CHF 15,000 (0.64% of export volume, 27% of value) is equal to that of the 26 million watches worth under CHF 2,000.

GROWTH FUELLED BY THE VERY HIGH END IN VALUE...

Although all the price categories have recorded higher values since 2008, 70% of the CHF 5 billion in export growth over the last six years has been in the category of watches worth more than CHF 5,000. The over CHF 15,000 category alone represents 40% of the global growth in export value, having risen by more than CHF 2 billion. With barely CHF 25 million between them in 2014, it has almost equalled the export value of watches under CHF 2,000, which in 2008 was easily the dominant export sector. Between 2012 and 2014 it remained the most dynamic category in the sector, even though 2014 saw a slight correction in favour of the next strongest category, CHF 5,000–15,000. 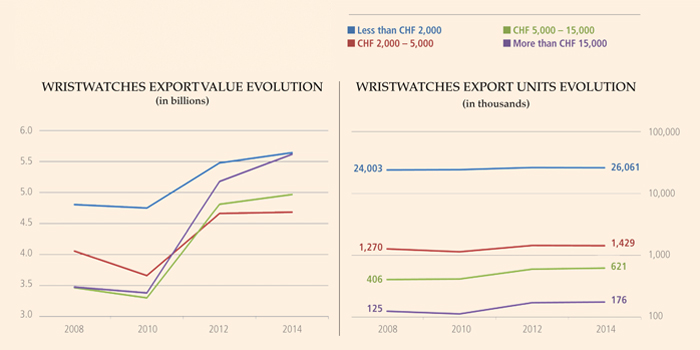 OVER CHF 3,000 CATEGORIES IN DETAIL

Although two-thirds of the export value of wristwatches is made up of pieces worth over CHF 3,000 (export price), more than half concerns pieces worth more than CHF 5,000, or around CHF 12,500 retail value. 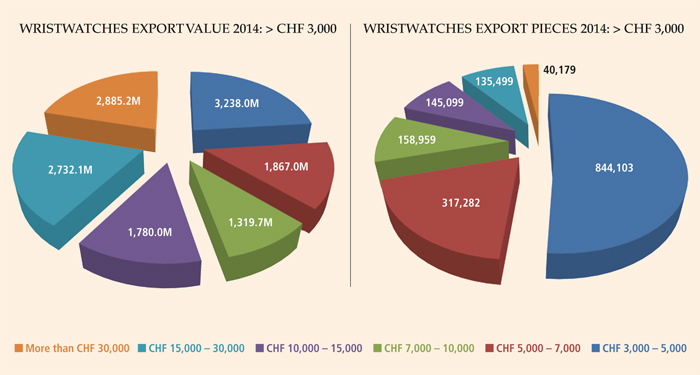 A more detailed analysis of the evolution of exports of watches worth over CHF 3,000 reveals, in the midst of widespread growth, a ‘soft underbelly’ between CHF 10,000 and CHF 15,000 in terms of both volume and value growth. Moreover, this category seems more sensitive to market fluctuations than the others.

Conversely, it should be noted that the CHF 5,000–7,000 category and the over CHF 30,000 sector appear extremely resilient, as demonstrated by the steady growth of export volumes. From 2008 to 2014 these two categories show almost a doubling of both the volume and the value of exports, with one notable difference: the over CHF 30,000 category is the only one in which the average price increased significantly over this period, marking a rise of almost 10%. 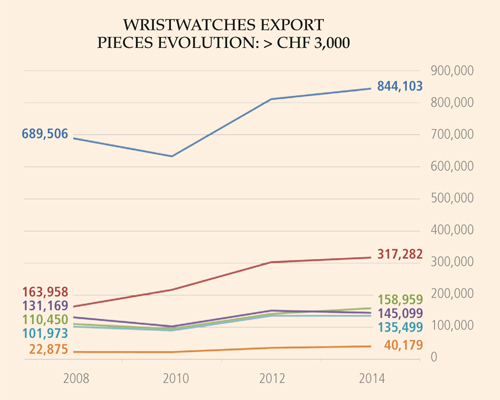 It is common knowledge that global exports of wristwatches are strongly concentrated in a limited number of territories. Thus, in 2014, 90% of export value was concentrated in 25 countries, compared with 27 back in 2008. The higher the price bracket, the more concentrated imports are in certain countries. In the over CHF 5,000 category, 22.5% of exports by value go to Hong Kong, while this territory absorbs only 14.8% of exports in the under CHF 5,000 category. In 2008 Hong Kong attracted just 19% of exports worth over CHF 5,000, with an absolute value of just under half 2014 figures. The same phenomenon is clear in 2014 for Singapore, which represents 7.3% of the export value of watches worth over CHF 5,000 (and even 8.4% of units) while it imports only 3.3% of those under CHF 5,000. The situation is similar in the United Arab Emirates. 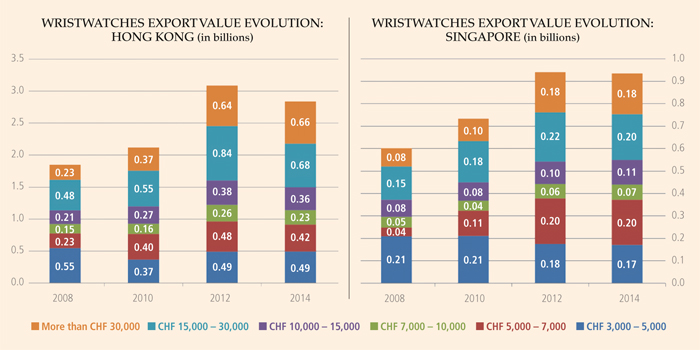 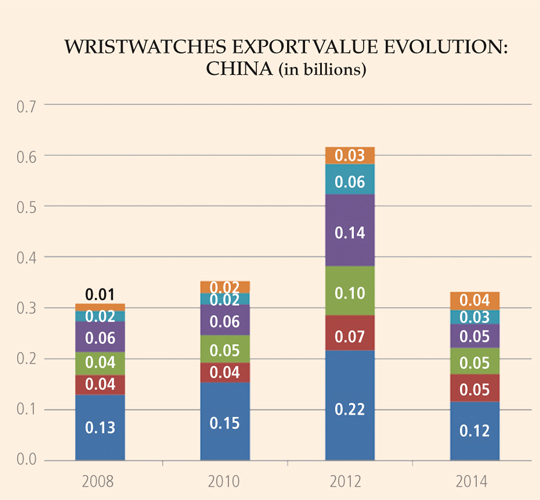 Five European countries account for 25% of the value in this category (France, Italy, Germany, United Kingdom and Spain), but one can legitimately question the percentage of these exports intended for local clients, given the strength of shopping tourism in these countries. Finally, the United States and the United Arab Emirates bring 10.6% and 5.6% respectively to the total export value of the category of timepieces over CHF 10,000. These two countries account for the majority of exports in this category to the Americas and the Near and Middle East. This market sector has remained stable for the United Arab Emirates since 2008, while it has dropped sharply for the United States, which previously accounted for 14.2% of total exports in this category.

In 2013 we were able to conduct a more comprehensive study of the characteristics of products in terms of price range and destination territories. Data protection rules limit access to the figures accounting for particularly small volumes: the data collected is therefore not completely exhaustive, although it does enable us to paint a fairly accurate picture. Moreover, these gaps in the data are revealing in themselves, pointing to highly concentrated markets around certain brands, in specific territories and price brackets. This is true of the CHF 5,000–7,000 category of watches, where some brands enjoy a virtual oligopoly in East and South-East Asia.As far as pieces worth more than CHF 30,000 are concerned, almost 40% had manually-wound movements, representing over 50% of total value in the category. More surprisingly, 14% of value in the category came from quartz watches, which nevertheless accounted for 1.7% of total export value! In the CHF 15,000– 30,000 category, 73% of movements were automatic, the rest being divided equally between quartz and manual movements. Precious metals constituted 93.5% of quantities in this category.Between CHF 10,000 and CHF 15,000 the division between movement types was exactly the same as in the higher category, but only 85% of watches were in precious metals. From CHF 7,000 to CHF 10,000, precious metals represented just 60% of the total. In terms of movements, quartz gained ground on manual (16% compared with 10%), while automatic movements maintained the same volume levels as in the higher categories (73%).

Because of the extreme dominance of some few brands, the CHF 5,000–7,000 category could not be analysed with the same precision as the others, for data protection reasons. In particular, countries such as Hong Kong, Singapore, Taiwan, Thailand and the Philippines seemed to favour a very restricted number of flagship brands in this price bracket. Nevertheless, it was possible to ascertain that 84% of movements were automatic, 12% quartz and barely 4% manual. Precious metals represented only 20% of this category. Finally, in the CHF 3,000–5,000 category, precious metals represented a little over 7% in volume terms, while automatic movements dominated with 87%, compared with 4% for manuals and 9% for quartz.

However accurate they may be, export statistics lift just a small corner of the veil over the watch market. Clearly – and this goes almost without saying – they do not say anything about the Swiss market itself. They do include re-exports, goods warehoused in free port and items held in stock by distributors, subsidiaries and brand boutiques throughout the world. These intermediate stocks can make a significant difference to the correlation between exports and final sales.

However, overall the figures are still an important indicator of industry trends. The analysis we have given above sheds a different light on the notorious ‘over CHF 3,000’ category and provides a basis for further research into the prospects of the luxury watchmaking sector (over CHF 10,000 retail price), which constitutes more than half of export value.

It is particularly interesting to compare the figures presented here with various studies on global wealth distribution, such as that published by Credit Suisse. According to this study, in 2014 there were around 35 million individuals with a net worth of over USD 1 million, including 2.5 million with USD 5–10 million, 1.4 million with USD 10–50 million and 130,000 with more than USD 50 million. Which sector of the population is likely to be responsible for the 40,000 wristwatches worth over CHF 30,000 exported in 2014 for almost CHF 2.9 billion, given that their average retail price is over CHF 178,000? And what does this figure represent in terms of numbers of individuals?

According to Credit Suisse, the number of millionaires is expected to grow more than 50% by 2019, rising to 53 million people. Will the Swiss luxury watch industry maintain its powers of seduction and hold the same level of growth?

For more information, contact the authors at [email protected]