I discovered Nobel tucked away in Hall 2 and was surprised to see an interesting collection of Swiss watches at particularly inexpensive prices ranging from 280 Swiss francs to 2,000.

Michel Mallet, the brand’s CEO, told me that this was only their second participation at Baselworld and although they have been marketing their watches for four years, the brand dates back to 1903 when they were suppliers to the aristocracy. 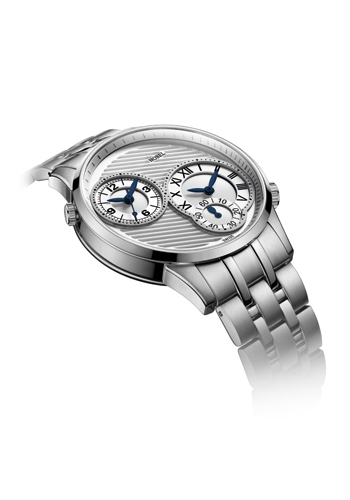 “We produce a classical line of watches,” Mallet explained, “and our potential is huge since we design for classic people in the thirty to sixty age group. Our sports watches though are aimed at the under thirties and next year we will launch our first chronograph with a Valjoux movement. We are enjoying a slow but sure growth and last year we produced around 10,000 watches selling mainly in the Mid- and Far East.”

There are four distinct collections: Nest for the classic look; Debye for sports enthusiasts including chronographs; Siman for the aristocratic look for both gent’s and ladies’ models and Aston with a classic two-tone finish.

The watch that caught my attention was a distinctive dual time zone model from the Siman Collection. It has a stainless steel case and a bracelet with a butterfly clasp and is equipped with a Ronda movement with a small seconds counter between 5 and 6 o’clock for one time zone and a three hand variant for the second time zone.