Having built a reputation in London for restoring watches by masters such as Breguet and Patek Philippe, Peter Speake-Marin moved to Switzerland and after developing high-end complicated timepieces for Renaud & Papi set out on his own and as a member of the Académie Horlogère de Créateurs Indépendants (ACHI) quickly established his reputation as an original and creative watchmaker. After his years in the ‘Palace’ he has now made his way across the road to the more conventional Hall 1, although conventional is certainly not how one would describe his timepieces. This year’s new models in the various collections underline his philosophy of originality of design and aesthetics.

Particularly striking is the new Spirit Mk II DLC, a matte black 42 mm sandblasted stainless steel watch coated with black PVD, equipped with a Calibre TT738 automatic movement and a 120-hour power reserve. The numerals, hour and minute markers and the railroad chapter ring are all in white SuperLuminova moulded as part of the one-piece dial. The hour and minute hands are coated with black PVD and hand-filled with SuperLuminova and the caseback is engraved with the Spirit motto: ‘Fight, Love and Persevere’. 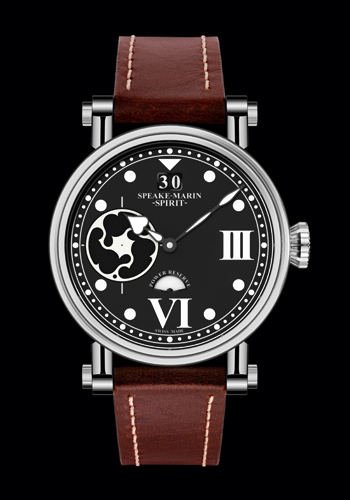 A more eye-catching model in my opinion is the 42 mm titanium Spirit Wing Commander, with its bold Roman numerals at 3 and 6 o’clock and the unique white lacquered seconds wheel at 9 o’clock is a replica of the Speake-Marin icon (Topping tool); there is a white lacquered big date at 12 o’clock and a unique power-reserve indicator at 6 o’clock that displays in bright white when fully wound, turns black when half full and red on empty. The dial is in matte black resin with white elements in SuperLuminova in 3D relief and set into the dial. The watch is equipped with a Calibre 1024SPM automatic movement with a 48-hour power reserve. 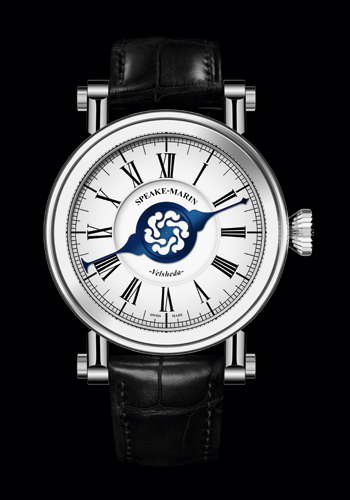 The Valsheda is named after the British ‘J Class’ yacht built in the 1930s and it has the aesthetic look of an antique compass with a single blued and polished hand indicating the time and a central blued ‘topping tool’ seconds wheel. The white lacquered multi-level dial with black Roman numerals gives it further depth. Equipped with an Eros Calibre automatic mechanical movement with a 120-hour power reserve, the classic 42 mm Speake-Marin Piccadilly case is in stainless steel has a two-position crown - manual winding and hacking seconds – and has sapphire crystals front and back. The watch is water-resistant to 30 metres.

Two other timepieces that deserve a mention: the Spirit Seafire chronograph with its matte black dial and ‘Topping tool’ seconds dial at 9 o’clock and the inevitable and ultimate test for today’s master watchmakers, the J-Class Tourbillon Magister with its 42 mm Piccadilly case in titanium, white lacquered multi-level dial and automatic movement with a platinum micro-rotor and hand-finished 60-second tourbillon handsomely visible at 6 o’clock.

Peter Speake-Marin has created a quite remarkable collection of timepieces that range from the simple beauty of the three-hand models to the exquisite complications of minute repeaters, tourbillons and jumping hours that should keep him in the forefront of Swiss watchmaking.