In 2001, Eberhard & Co. caught many people’s attention when the it launched its Chrono 4, the first chronograph in watchmaking history to present a linear reading of minutes, hours, 24 hours and seconds. This year the four counters were still dominant in a 40 mm timepiece but with the additional choice of white or black dials. Perhaps the most impressive is the all-black version with silver outlines around the black counters and a red hand for the 24-hour counter.

There are two other watches that deserve more than a passing glance: a Limited Edition entitled Extra-Fort ‘Ardisco non ordisco’, and the Gilda Floral watch. The unusually named Extra-fort ‘Ardisco non ordisco’, is a timepiece that celebrates the 150th anniversary of the birth of Gabriele D’Annunzio, an Italian poet, novelist and playwright born in 1863. A fervent interventionist during the First World War when he was over fifty years old, he participated in many daring actions and one of his most famous sayings was ‘Ardisco non ordisco’ – I don’t plot, I dare – the expression of a man with firm convictions that dominated the literary and political scene of the period. 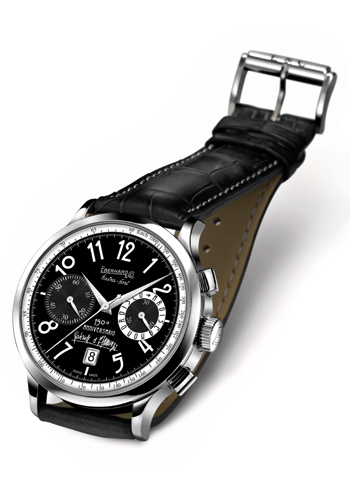 The link between Eberhard & Co. and Gabriele D’Annunzio comes via Tazio Nuvolari, a racing driver who became a close friend of the author after they met in 1932. To pay their tribute the brand introduced a new Limited Edition of 150 pieces of the Extra-fort model, a 41 mm automatic chronograph with a black dial with the ‘Ardisco non ordisco’ motto surrounding the 30-minute counter at 3 o’clock, a 60-second counter at 9 o’clock and D’Annunzio’s signature on the dial which is also etched on the caseback. Water-resistant to 50 metres, this commemorative timepiece comes with either a crocodile strap or a stainless steel ‘chalin’ bracelet. 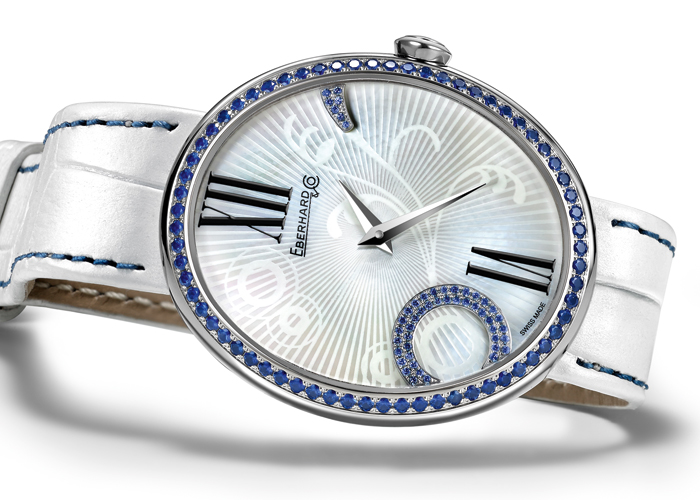 The other watch is the Gilda Floral, a charming ladies’ watch in white gold with sixty-six sapphires set into the bezel and a further 112 blue sapphires and diamonds set onto an elliptical dial. This eye-catching watch is equipped with a quartz movement, has a sapphire crystal with a patented spherical dome with anti-reflective treatment and a white crocodile strap with elegant blue stitching and a white gold clasp engraved with the letter E. There is also a stainless steel version of the Gilda Floral and a Limited Edition with a special bracelet with 12 diamonds and 380 blue sapphires.