James Tiberius Kirk was the famous Starship captain in the television series Star Trek. The show impressed the young Maximilian Büsser and Kirk was one of his boyhood heroes, so much so that some, if not all of his horological creations have been inspired by it.

Space travel is no longer a fantasy nor is the latest offering from the combined team of MB&F, Ecal design graduate Xin Wang and the high-end clock manufacturer L’Epée: the Starfleet Machine.

Maximilian Büsser and L’Epée’s CEO, Arnaud Nicolas, launched their amazing creation at a breakfast presentation at Baselworld. Between croissants and coffee we discovered a magnificent clock that looked as if it had joined the event from outer space and had landed gracefully on a table for all to inspect and admire its complexity and the valiant efforts of the manufacturing team to assemble such a futuristic looking clock. At eye level it has the aspect of a spaceship, standing above it you can only marvel at the complex mechanism that is not only the result of exquisite workmanship, but also a visual feast of horological components that appear more like the workings of an intricate bomb that James Bond must deactivate in order to save the world.

The Starfleet Machine is classified by the MB&F and L’Epée teams as ‘an intergalactic spaceship-cum-table clock, featuring hours and minutes, double retrograde seconds and power reserve indicator.’ Here is the official explanation of the Machine: ‘Hours and minutes are indicated on the central black dome and behind that, a smaller rotating dome, accompanied by a revolving radar dish, provides an intuitive view of remaining energy: five bars indicates the movement is fully wound (40 days of power); one bar means Starfleet Machine is running low on propellant (eight days of remaining power) – it’s all relative – most table clocks have a maximum power reserve of only eight days. The extraordinary in-house movement boasts an exceptional power reserve of 40 days. Below 12 o’clock on the central hour-minute dome are the double retrograde seconds in the form of turret-mounted laser cannons. The cannons start in parallel and cross over one another before rapidly flying out again, an action marking off 20-second intervals. The red-tipped cannons provide eye-catching visual animation, and perhaps just as importantly, fend off enemy attacks against the core of the craft just underneath: the regulator, which has deliberately been placed in full view for all to admire. 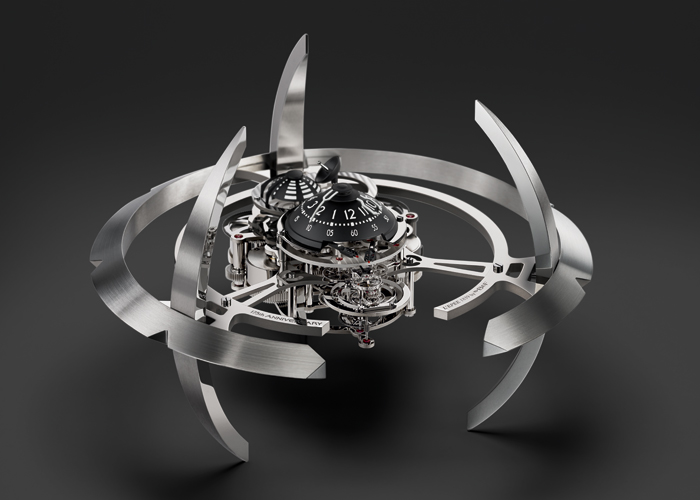 The Starfleet Machine by MB&F and L’Epée

One of the biggest challenges for L’Epée was respecting the movement configuration required by MB&F’s spacecraft design. L’Epée’s calibre – featuring five main spring barrels (in series for optimal performance) – usually equips vertically standing clocks, but here it is laid flat. The escapement platform also had to be set horizontally to be protected by the turret-mounted laser cannons. Naturally, the movement beats with a precision that Starfleet would be proud of, for an impressive accuracy of -2 to +2 minutes over 40 days!