Returning from my trip in the rarefied atmosphere of the spatial Starfleet clock into the complex and crowded world of miniature marvels that one wears on the wrist, I was immediately elevated into what can only be described as the stratosphere of Graff (perhaps Graffosphere would be more appropriate), where scintillating diamonds of every colour and size appear in both jewellery and timepieces (to read about the mind-blowing Graff Hallucination see page 38).

However, Graff hasn’t limited itself to producing diamond-laden timepieces – although that is certainly their forte. The company has a workshop in Geneva but they are not a ‘manufacture’ and work closely with partners that help create exclusive movements for them, which is what MHC did on the striking GyroGraff. 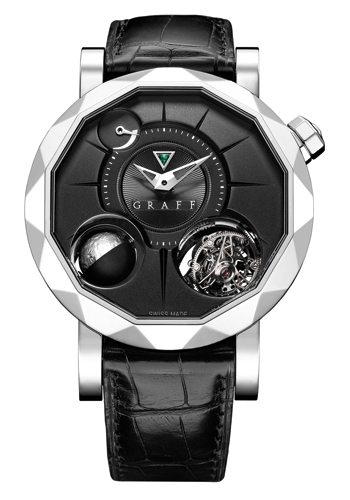 This watch in facetted white gold shows hours and minutes and has a double axis tourbillon at 5 o’clock, a three-dimensional gyrograph moon phase indicator at 7 o’clock showing the daily progression of the moon, a 60-hour power reserve at 11 o’clock and a diamond-set crown is placed at 2 o’clock to ensure the timepiece has a balanced appearance. The multi-level black dial has guilloché work at the centre with a triangular-cut emerald at the 12 o’clock position. Water-resistant to 30 metres, the GyroGraff comes with either a black or white dial, has a black alligator strap and is also available in rose gold. There is also a version with a diamond-set bezel with 72 diamonds (8.03 carats). 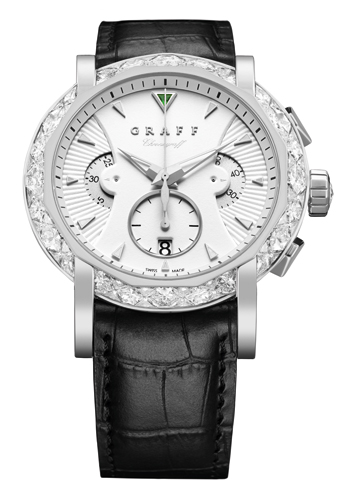 If its a high-end diamond-set chronograph you require, then you need look no further then the ChronoGraff 45 mm from the Graff Sport watches collection. Originally launched in gold and DLC versions, the striking facetted case now has Graff’s patented diamond mosaic setting and various combinations of coloured DLC, alligator and facetted rubber straps. With its white multi-level dial with sunray guilloché pattern that highlights the white gold discs of the chronograph’s indicators and the 60-second dial at 6 o’clock into which the date window is set, reading the functions of the watch is almost like looking into a three-dimensional hologram. The ChronoGraff 45 has a self-winding movement with a 120-hour power reserve, and is available in various combinations of white and rose gold, DLC and black or white dials.

With their dazzling watch collections and impressive 500 square metre stand, Graff certainly made an auspicious first appearance at Baselworld.