Since its creation in 2001, Pilo & Co. has established itself as a watch company par excellence of quality watches at highly competitive prices. Modern and striking in appearance with intriguing names such as Corleone, Doppio Orario, Invidia, Capone and Stravaganza, it came as quite a surprise when I ventured onto the brand’s booth, there, standing out like a sore thumb in the midst of the handsome standards, was a set of six sublimely unique timepieces that broke completely with the Pilo tradition. 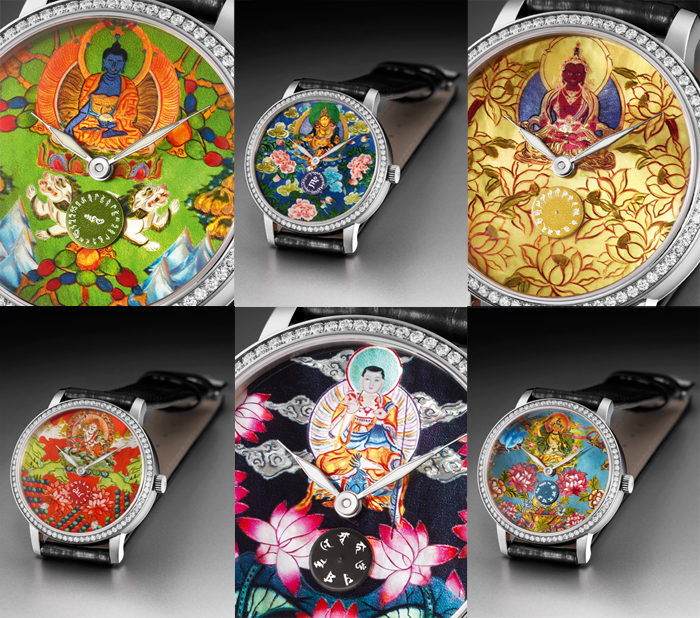 The exclusive set of six Pilo & Co. watches with their exquisitely hand-painted dials.

This exclusive set of 39 mm white gold watches immediately catches the eye because of the impact of the kaleidoscope of colour: Polynesian mother-of-pearl dials hand-painted in Switzerland by André Martinez of La Locle, enhanced by the sparkle of the diamond-set bezels. The watches are equipped with an automatic movement and completed by a hand-stitched alligator strap. The multi-coloured dials took between sixty to seventy hours to produce and they portray the six Gods of Tibet from the Buddhist religion. The small seconds enamelled dial, set slightly higher than the normal position at six o’clock, rotates in its floral settings and features an inscribed prayer pertaining to the God.

With an estimated retail value of 150,000 Swiss francs, these six unique works of art are a steal when one considers the work involved and the originality of the timepieces – and they have already been acquired by a lucky collector. For once I’m letting the illustrations speak for themselves – except to add that the watches were one of my Baselworld highlights.