ALL EYES ON… CHANEL J12 IN THE SKY WITH DIAMONDS

The J12 is considered by many to be the first iconic watch born of the new millennium, unveiled as it was in the year 2000. Its pure forms giving pride of place to the simple beauty of ceramic, its ability to reinvent itself without ever betraying its fundamental nature and its accomplished exploration of the codes of Haute Horlogerie have quickly earned it classic status. 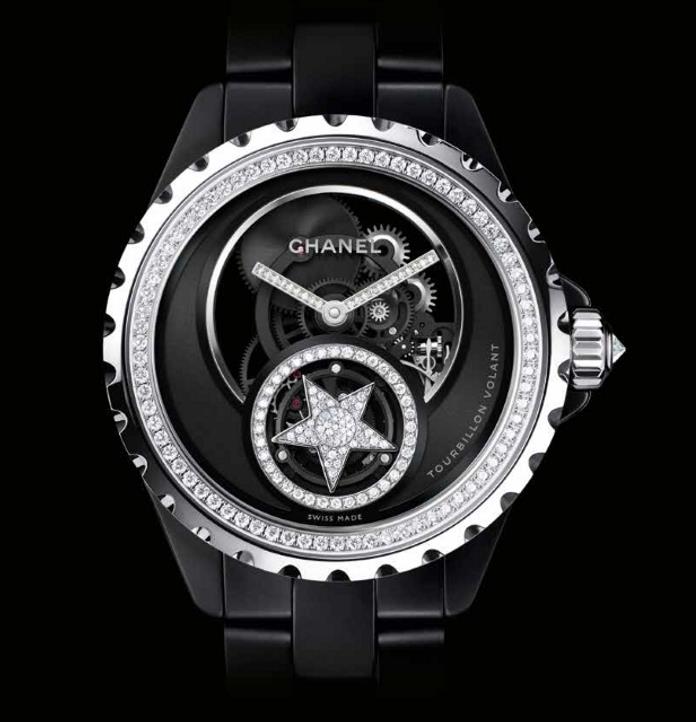 By pioneering the use of high-tech ceramic as a noble and precious material, by opting for the purity and austerity of black and white, by emphasising a strong, geometrical and Spartan graphic identity, by getting straight to the point and stripping away all the inessentials, by overturning stylistic conventions and redefining the rules of the game, the J12 has become an icon of 21st century watchmaking. In the 15 years since it was unveiled in the year 2000, the J12 has demonstrated a prodigious ability to undergo multiple transformations while remaining defiantly true to itself. Whatever form the metamorphosis takes – the introduction of white ceramic in 2003, exclusive editions set with baguette- cut precious gems in 2004, the first forays into Haute Horlogerie in 2005 with a tourbillon movement, exceptional cutting-edge performance in 2010 with the J12 Rétrograde Mystérieuse and its unique retractable vertical crown, as well as the J12 Marine that proved its mettle as a genuine professional diver’s watch, or a splash of colour in 2011 with the J12 Chromatic in titanium ceramic – the watch remains immediately recognisable.

The 2015 announcement of the J12 Skeleton Flying Tourbillon takes Chanel even deeper into the realms of Haute Horlogerie while simultaneously reaffirming the maison’s guiding principles. As always, these tenets can be traced back to the forthright founder of the Place Vendôme maison, Gabrielle Chanel, who set down the timeless rules that continue to govern the house style. As she put it: “Elegance is in the line... Always remove, never put back.” And also, “I imposed black. It still reigns, because black trumps everything else.” She said the same about white. Gabrielle Chanel had a predilection for certain motifs, the camellia and the comet among others. To these ‘laws’, which combine to form a kind of style manifesto, can be added a precept that Gabrielle Chanel never tired of repeating: “Elegance is being equally beautiful on the inside and on the outside.” Bearing all this in mind, the J12 Skeleton Flying Tourbillon can be seen as the quintessence of Gabrielle Chanel’s style. Its understated appearance conceals all but the essential parts of the movement, which it reveals in all their beauty. Its pure aesthetic enhances the subtle play of details and the contrast between black and white. Its mechanical prowess is undeniable, driven as it is by one of the most accomplished and complex mechanisms: the flying tourbillon. And finally, the architecture of its skeletonised movement is designed to create a perfect fusion of form and function.

OUTSIDE IN, INSIDE OUT

Skeletonising the movement blurs the division between the inside and the outside of the watch. With no protective dial to conceal it, the movement itself becomes the face of the watch.  Chanel’s artistic team was nevertheless not content merely to skeletonise an existing movement. Working in collaboration with APRP, one of Switzerland’s finest producers of complex movements and a company with which Chanel enjoys a long-standing relationship, they completely redesigned the entire movement component by component, creating a transparent architecture that reveals just the essential parts of the mechanism, which are judiciously arranged to showcase their functionality and their beauty. The movement is constructed from top to bottom, beginning with the barrel that supplies energy to a gear train which in turn transmits it to the tourbillon regulator. As its name suggests, the tourbillon regulator then transforms this raw energy into regular, ordered bursts (the tick and the tock), and regulates the energy chronometrically before sending it into the gears that control the movement of the hour and minute hands.

Invented in 1801 by Abraham-Louis Breguet, the tourbillon regulator is one of watchmaking’s most subtle mechanisms. In essence, the regulating organs are contained in a rotating cage that negates the effects of gravity when the watch is held in a vertical position. The flying tourbillon is an even more complex variant in which the cage is supported not by a double bridge at the top and bottom, but by a lower bridge only. Aesthetically, this vertiginous absence of an upper bridge enhances the ethereal complexity of the whirling micro-mechanism.

INKY BLACK AND FLASHES OF DIAMOND

When everything is on display, the finish of each component becomes inordinately important. After having been machined with the most scientific precision, each of its components – of which there are 186, including 77 for the tourbillon alone, whose cage weighs just 0.579 grams – is hand-chamfered in the finest watchmaking tradition, giving every line and curve the cleanest and most delicate edge. 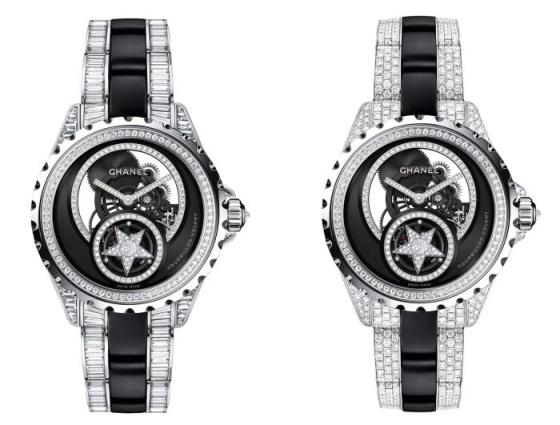 Aesthetically, the watchmakers sought to emphasise the contrasts between matt, brushed and polished finishes and materials, using the techniques of chamfering, brushing and snailing, setting up a play of light between the whites and blacks that give the watch a resolutely contemporary elegance. The plates and bridges are fashioned out of titanium, a light but strong material that requires an even more demanding finish, with no fewer than five coats of black PVD treatment.

Against the backdrop of subtle sheens and shades of black, the dazzling comet motif so dear to Mademoiselle Chanel blazes forth. This five-pointed star set with 49 brilliant-cut diamonds, mounted on the tourbillon carriage, indicates the seconds as it rotates once every minute. Offset against the matt black high-tech ceramic bracelet and case, the eye is drawn to the white gold crown, gem-set bezel and delicately bejewelled hour and minute hands, which sparkle above the tiered openwork movement nestled within an opaline and matt black surround. 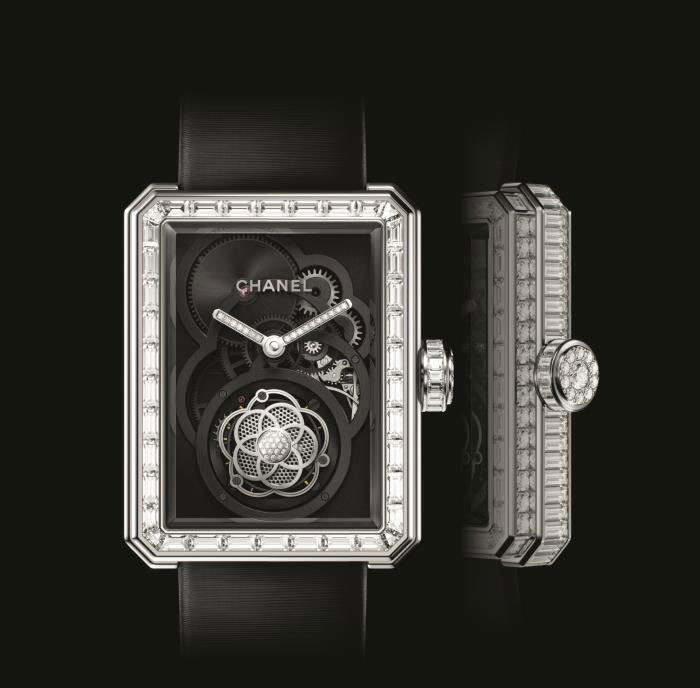 The shape of the Première has not changed in twenty years; it is still inspired by the geometry of Place Vendôme, reflected in the shape of the stopper on a bottle of Chanel No. 5 perfume, created in 1924 by Gabrielle Chanel. It is both graphically simple and geometrically pure, both traits accentuated by the clean lines of the camellia, Gabrielle Chanel’s favourite motif and the house’s signature figure. The iconic, delicately gem-set camellia is poised over a flying tourbillon, whose movements can be glimpsed through the delicate tracery of overlapping circles, like metallic embroidery.

Above, part of the movement can be discerned through a cluster of interlocking black PVD-treated circles and bridges which define the dial, framed by a white gold bezel and case set with regiments of baguette-cut diamonds, emphasising its meticulous geometry. Fitted with a black satin strap, the Première Openwork Flying Tourbillon is available in a limited edition of 12, each set with 234 stones weighing 7.50 carats, including 115 baguette-cut diamonds (€330,000). Another version, also limited to 12 timepieces, combines baguette-cut diamonds with black spinels on the caseband and clasp (€310,000).