HYT, the flow of time


Inspired by the ancient water clock, fluid-driven time-telling required ten years of development to finally appear in the Neuchâtel-based brand’s watches. Using HYT as a showcase, its sister company Preciflex is now taking on the jewellery and especially medical fields. A tour.

HYT, the flow of time

Inspired by the ancient water clock, fluid-driven time-telling required ten years of development to finally appear in the Neuchâtel-based brand’s watches. Using HYT as a showcase, its sister company Preciflex is now taking on the jewellery and especially medical fields. A tour.
“W

hat is special about our company is that we employ more engineers than watchmakers,” Grégory Dourde, CEO of HYT and Preciflex, immediately explains. “We are working in a very specific field of research that we ourselves have created. Today, there is no guide to micro-fluidics in watchmaking. We are currently writing that book.” In fact, out of 45 people working at HYT and Preciflex, there are no fewer than 18 engineers and 7 doctors.

The young High Watchmaking brand, founded in 2012, gained renown through its use of fluids to tell the time instead of traditional hands. Europa Star hoped to better understand this technological challenge – which is also a philosophical one, since it is inspired by ancient water clocks – by visiting the brand’s Neuchâtel-based workshops.

In reality, the Preciflex “project” (of which HYT is currently the best showcase, but of which the scope stretches beyond watchmaking) was initiated in 2002 by the engineer Lucien Vouillamoz. Its strong point: the mastery of fluid circulation through micro-capsules or “capillary tubes”, at the crossroads between the fields of chemistry, microfluidics, micromechanics and optics. “The limits and possibilities of microfluidics are vast and not yet clearly defined,” states Grégory Dourde.

The key element of the system is the thermal compensator located inside the left-hand bellows, which compensates for dilation of the fluids due to temperature variations.

Preciflex, currently in the process of joining forces with Micro-City, the ambitious industrial innovation centre of Neuchâtel, is currently applying its technologies to watchmaking (for HYT and other brands), jewellery (moving jewellery components) and the medical field (micro-injectors). However, one day the technology may become a part of the lighting or automotive industries, for example. The company has 27 families of patents pending, of which 8 have been granted to date.

The mastery of fluids

How does the system developed by Preciflex function within a watch , in concrete terms? Johann Rohner, the company’s R&D Director, takes charge of the explanations. Two flexible reservoirs or “bellows” are installed at each end of a capillary tube. In the first is the active fluid, a coloured liquid; in the second is the passive fluid, a transparent one. The capillary is not replaceable: “Our fluidic modules are sealed for all eternity,” asserts Johann Rohner. “That is why their water-tightness is 10,000 times higher than that of a standard watch.”

“What is special about our company is that we employ more engineers than watchmakers. Today, there is no guide to micro-fluidics in watchmaking. We are currently writing that book.”

A physical phenomenon based on the repulsive force of the molecules of each liquid keeps the fluids separated while their movement is controlled by the bellows. “The two fluids repel each other, a bit like oil and vinegar,” the specialist continues. “The key element is the thermal compensator located within the bellows to the left, making it possible to compensate for the dilation of the fluids due to variations in temperature.” 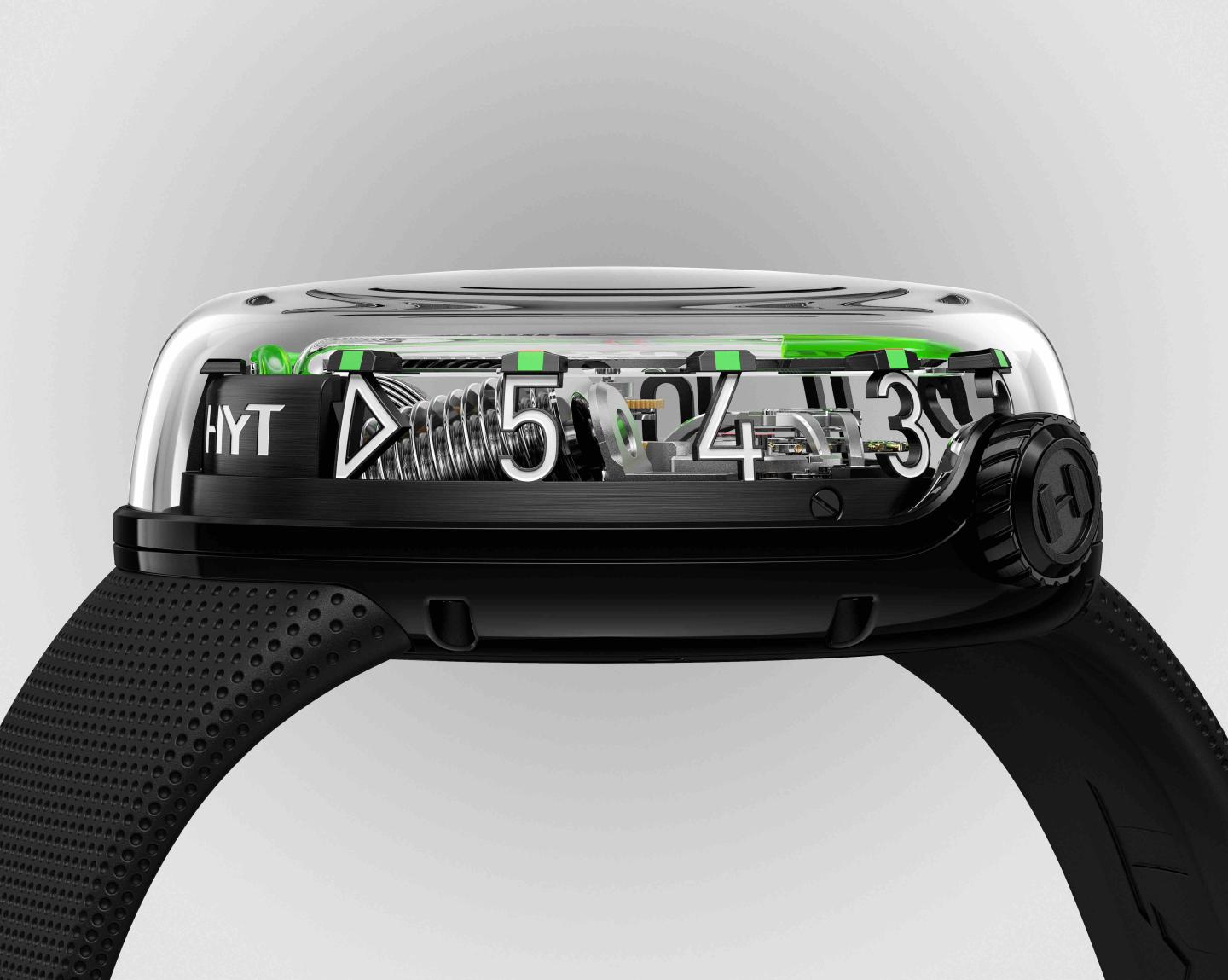 To date, HYT has developed four colourings, each of which took an average of a full year of research to perfect. It is especially important that the fluid doesn’t cling to the surface of the capillary, which would hinder its motion and leave unsightly traces: “We are establishing a specific treatment to keep the liquid from sticking to the surface of the glass tube.”

But how to ensure that the fluidic system functions in over the long term, when the company was only founded a few years ago? Of course, there are no machines specialising in fluidic watchmaking, so the company had to specifically develop them, particularly to perform ageing tests.

“The Arrhenius equation, discovered by a Swedish chemist in 1889, draws a parallel between chemical reactions and temperature. At a certain temperature, a reaction that takes one month is equal to a reaction that takes one year,” explains Johann Rohner. “It is this relationship that enables us today to confidently produce our watches. We currently provide a five-year warranty, which reassures our clients. Our return rate is lower than 3%.”

HYT also designed a module that emits light through the intermediary of two LEDs, making it possible to tell the time in the dark. The system is totally mechanical, and has been integrated into the H4 module to enable light emission for 4 to 12 seconds. The mechanical movements of the H0, H1, Skull and H4 models were developed with Chronode, while those of the H2 and H3 models were developed with Renaud Papi.

After HYT, Preciflex launched another spin-off a few months ago called Preci-Health. This brand will represent the corporation’s medical solutions in its relations with the medtech leaders whose establishment in the Lake Geneva region have earned the area the nickname “Health Valley”.

“In reality, our added value is not so much based on the liquids themselves as it is on the waterproof and thermal compensation systems designed to drive these fluids, and which will be able to be used to drive other fluids,” explains Grégory Dourde. “Our expertise resides in micro-injectors. We ensure that no air bubbles can form. It might be unacceptable to see them appear in watches, but it would be out of the question in a device implanted within the human body!”

Preci-Health is indeed developing a single-use, fixeddosage micro-injector that makes it possible to load less medication when performing a subcutaneous injection – 3 mm beneath the skin. This microinjector can, for example, be used to provoke an adrenaline shock when treating an allergic reaction. Medical law being infinitely more complex and costly than that of watchmaking, the company raised funds for the project. Its investors include Peter Brabeck-Letmathe, the former CEO of Nestlé. 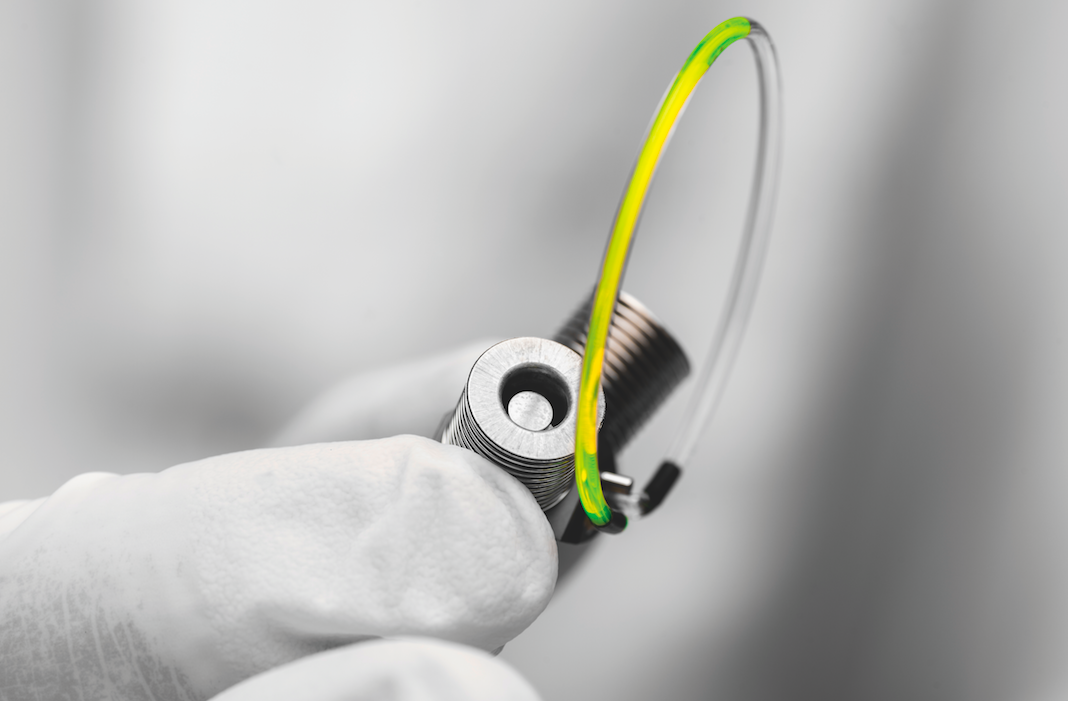 A different philosophy of time

Following our tour, Grégory Dourde stresses a point that he considers essential: “What is important is that our use of microfluidics is not just cosmetic or aesthetic, and it is not just a publicity stunt. You saw yourself, through your tour of the premises, that our scientific project is quite serious. Beware of the search for original material simply to serve a brand’s storytelling.”

The underlying philosophy is that of intuitive time: time that passes and leaves a trace. “This is another philosophy of time. It is at the crossroads between art and science.” 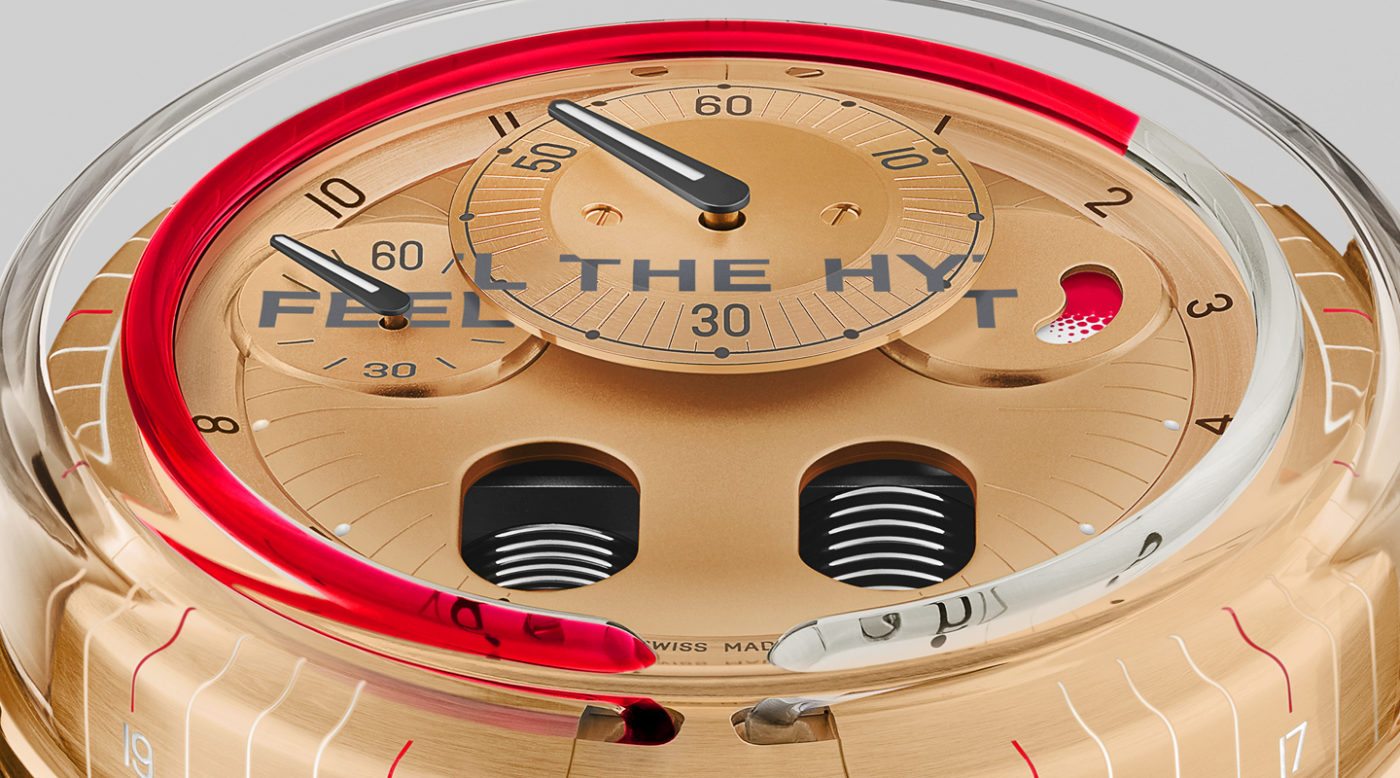 HYT, which plans on producing just over 400 watches this year, currently aims to improve on “education” about its project. “We stopped our sponsoring efforts, and we are now concentrating on explaining our technology and the meaning that we are bringing to it. You know, after overcoming the hurdle of the collectors at Carré des Horlogers, it is one of the most difficult watch brands to market to a broader public, since it takes time to explain the product correctly. The vocabulary and technologies are new and unique. The key to our performance is therefore the training of our representatives. But when clients grasp the general idea of the project, their conversion is immediate.”