On 7 December 1845, Ferdinand A. Lange established the first production facility for pocket watches in Glashütte, in the Saxony région of Germany. His sons Emil and Richard later took over the responsibility for the company after their father’s death and built A. Lange & Söhne into a renowned watchmaking company. After the division of Germany following World War II, the company was appropriated by the German Democratic Republic. Walter Lange revived the brand after German réunification in 1990. Within four years, A. Lange & Söhne presented its first collection of wristwatches: the Lange 1, the Saxonia, the Tourbillon “Pour le Mérite” and the Arkade.

The collection has since been extended to include such legendary timepieces as the Richard Lange, the Langematik and the Datograph.

How can you resist the special, poetic, sensitive and often colourful attraction of jewellery watches? To be able to afford these works of art remains a (...)

Despite the inroads made by the smartwatch, the sports watch remains particularly resilient in the traditional watch industry. It is often the point of (...)

Meeting collectors around the world: a mini-series

To appeal to collectors and beyond, replicating the physical experience online is a new imperative for the watch industry. The Covid-led lockdowns, the (...)

December 7 was a special day for A. Lange & Söhne, as the manufacture was celebrating a double anniversary: 175 years ago, Ferdinand Adolph Lange laid (...)

The Odysseus opens up a new chapter for A. Lange & Söhne. It lays the foundation for a further watch family: the sixth one. For the first regularly (...) 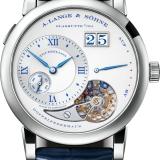 In the year 2000, the impressive LANGE 1 TOURBILLON had its debut as the world’s first wristwatch with the unusual combination of a tourbillon, an outsize (...)