Blancpain was established in 1735 by Jehan-Jacques Blancpain in Villeret, in what is now the Bernese Jura. One of the most successful Blancpain watches has been the Fifty Fathoms, which was launched in 1953 and remains a cornerstone of the Blancpain watch collection today. More recently, Blancpain introduced an extreme divers’ version of this piece, called the X Fathoms.

The Blancpain brand was purchased on 9 January 1983 by Jacques Piguet, the son of Frédéric Piguet, and Jean-Claude Biver. Production was moved to Le Brassus, in the Vallée de Joux. The company was later purchased by the Swatch Group and Marc A. Hayek has been the CEO since 2002. In 2010 the company became vertically integrated with the take-over of Frédéric Piguet SA, which had been supplying Blancpain with movements and components.

Blancpain celebrates the 2022 Lunar New Year by unveiling a new version of its Traditional Chinese Calendar. Crafted in platinum and issued in a 50-piece (...)

Blancpain: a new edition of the Fifty Fathoms Tourbillon 8 Jours

Since its inception in 1956, the Bathyscaphe line has been a mainstay of Blancpain’s diver’s watch collection. True to the legacy and sporty-chic style of (...)

The Air Command collection is inspired by a highly sought-after 1950s Blancpain chronograph that was produced in tiny quantities. In the slipstream of its (...)

All kinds of vintage

The trend for vintage and revival watches must be a symptom of something. Why this infatuation in so many young – and not-so-young – collectors, nostalgic (...)

Join Serge Maillard, Publisher & CEO of Europa Star, and Stephen Foskett, Publisher of Grail Watch, as we tell the stories of the events that changed (...)

For its 21st Valentine’s Day special series, Blancpain offers a new interpretation of its Villeret Women Date model in a 28-piece limited (...)

Blancpain sets sail for Taiwan by dedicating two individual models to one of the wonders of the animal kingdom bound up with the island’s history: the (...)

To celebrate love, Blancpain unveils a jewelry timepiece inspired by a cocktail watch once owned by Marilyn Monroe. Symbolically issued in a 14-piece (...) 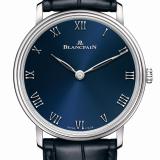 At Blancpain, excellence lies at the heart of all its watch creations, combining expertise, innovation and aestheticism. The new Villeret Ultraplate is the (...)