Bulgari (also written, as in the company logo, as Bulgari) was established in Rome in 1884 by the Greek silversmith Sotirio Bulgari as a single jewellery shop. The Bulgari name has since come to be associated with everything from jewellery to watches to leather goods, accessories, fragrances… even hotels!

Francesco Trapani, the son of Agostino Trapani and Lia Bulgari, has been the CEO of the Group since 1984. In June 2011, the Bulgari family transferred its majority ownership of the company to the LVMH Group.

Numerous private initiatives from wealthy individuals or global companies are today making up for the failures of states that did not foresee the extent of (...)

In the latest models of the Divas’ Dream collection, the Roman jeweler continues to push the limits of form and function. Bringing the jeweler’s touch to the (...)

Bulgari, the Roman Jeweler of Time, introduces its latest novelties at the LVMH Watch Week Dubai 2020. The indisputable highlight of the 2020 debuts is the (...) 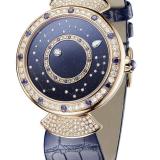 The Divas’ Dream collection welcomes a poetic “The Roman Night” model. The timepiece indicates the hours and minutes on two overlaid Aventurine discs, each (...) 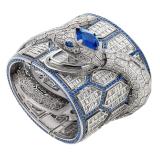