The young Harry Winston (1886-1978) worked in his father’s small jewellery workshop in New York and quickly became a connoisseur of precious stones. His knowledge of the subject earned him a fortune and made him “King of the diamonds”. In the United States his name even became an expression, a symbol of luxury and riches! In 1932, he set up his own jewellery brand but it was not until 1989 that the brand transferred its creativity in jewellery to the field of watchmaking. It continued its rise in 2007 by opening its own manufacture in Geneva, the capital of fine watchmaking. Harry Winston is famous for its Midnight, Avenue and Opus collections.

> Harry Winston – search all reports since 2000 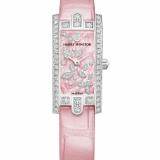 Adorned with its historic cluster motif, the House of Harry Winston introduces the newest timepiece to its iconic Avenue Collection. The Avenue C Mini Lily (...) 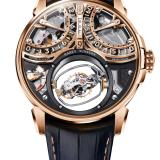 This triaxial tourbillon is the ninth iteration of a “history” that began back in 2009, under a previous ruler, but which has been faithfully continued by (...) 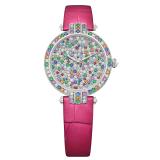 A modern timepiece with a highly architectural design, the relatively sporty Project Z12 wristwatch boasts a new complication that highlights the (...)

This week in the news, Raymond Weil adds to its Freelancer collection, Corum releases a mini version of the Bubble Watch, and Harry Winston launches a new (...)

This week in the news: Zenith in blue, F.P. Journe’s art and science of watchmaking, Harry Winston in vogue with vintage, and introducing new British brand (...) 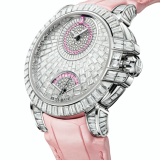 Flooded with the light of 404 diamonds and 43 pink sapphires, the Ocean Waterfall Automatic 36mm demonstrates the signature qualities of the Ocean family - (...)

The luxury brand commemorates two decades of the Ocean collection with new men’s and ladies’ limited editions that are as bold and complicated as (...)

The American luxury house presents a new high jewelry timepiece that features leaves of diamonds on a flexible gold trellis, a motif inspired by nature and (...)

Part of the popular Avenue Collection, this ladies’ watch is true to the brand’s Art Deco styling while also delivering one of the smallest movements with a (...)