Longines has been based in St Imier, Switzerland, since 1832 when Auguste Agassiz entered the world of watchmaking by establishing a partnership with a watchmaking counter in Saint-Imier and later took control of the company, renaming it “Agassiz & compagnie”.

In the 1850s, Ernest Francillon, a nephew of Agassiz, took over the management and grouped the different operations involved in the finalisation of timepieces together in one factory, using mechanical production methods to assemble and finish complete watches. The land he purchased to build his factory in St. Imier was called “Les Longines”.

Longines president Walter von Känel has worked at the brand since 1969 and has led the company, which is today part of the Swatch Group, since 1988. The Longines Master collection for gentlemen and the Longines Dolce Vita collection for ladies are two of the brand’s flagship watch collections.

Who could have imagined, in early 2020, that we’d be where we are today? The pandemic crisis is accelerating change everywhere. Two “rocks” of the Swiss watch (...)

Longines’ HydroConquest collection is now available in green hues. Adding to range, that has models of blue, grey and black, the new additions in tones (...)

Longines extends its Heritage segment with a new interpretation, The Longines Heritage Classic Chronograph 1946, the reissue of a piece produced in the (...)

Longines revisits a military watch from the Interwar period featuring a timeless, understated design and a hand-wound mechanical calibre. This watch is (...)

The Writer: Esra Gürmen - “I love time-only watches. To me, a good time-only watch should exude practicality and beauty at the same time - something that The (...)

The renewed and growing interest in timepieces from the golden era of what we now call “vintage” watches also signals a return to the intrinsic, essential (...) 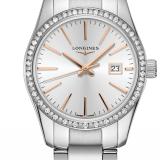 Longines has combined the femininity of materials and dynamic lines to create the new Conquest Classic. Perfectly suited for the women of today, it remains (...)