Hans Wilsdorf, the founder of Rolex, created Tudor in 1946, a more accessible brand but one which nevertheless maintains excellence in terms of its quality. Having remained discreet for a long time, the brand from Rue François Dussaud in Geneva has recently spread its wings and looked into its past to reinvent itself. And what a success it has been! The new cornerstone of the collection is the Heritage Chrono, the spiritual offspring of the Oysterdate which appeared in the 1970s. The second highlight model is the Heritage Advisor with an integrated alarm and circular indicator for the alarm’s power reserve at 3 o’clock. As an added bonus, the alarm switches off automatically after 10 seconds in order to conserve power. Tudor is also active in the automobile and motorbike-inspired worlds with the Grantour and Fastrider collections respectively. The ladies’ collection comprises the Clair de Rose line, which uses the symbol of the rose—the historical evocation of England’s royal dynasty of the Tudors— in all its forms, whether on the crown with its transparent cabochon in which a rose is floating, the centre seconds hand or in subtle mother-of-pearl detailing on the dial. But the brand’s emblematic model is still undeniably the Tudor Prince. China has been Tudor’s principal market for some time, even ahead of Europe.

Tudor presents a new technical model with a whole new aesthetic. Named Black Bay Pro, it has a 39-millimetre diameter, a fixed steel bezel and a (...)

Tudor: an introduction to the new Black Bay Ceramic

The new Black Bay Ceramic features a case in matt black ceramic and a manufacture calibre. It also obtained a Master Chronometer certification from (...)

More and more brands are reserving their most sought-after models for their own shops, which is causing increasing difficulties for multi-brand retailers. (...)

The Black Bay Fifty-Eight “Navy Blue” gets its name from its colour, of course, but also from the year 1958, in which the first Tudor divers’ watch waterproof (...)

The sport-chic watch par excellence, with its integrated bracelet, notched bezel and automatic movement, the new Tudor Royal range is both versatile and (...) 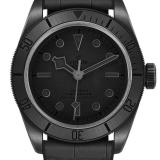