Ulysse Nardin (1823-1876) established his manufacture in 1846, in Le Locle. He was trained by William Dubois, a specialist in precision watches, and won “The Prize Medal” in 1862 at the International Exhibition in London. His company later became a leader in the production of pocket chronometers. Even after the death of Ulysse, the brand continued to win numerous international awards, in particular for its marine chronometers. Moreover, this maritime universe became the symbol of the brand, stamped with an anchor. In 1983, a group of investors purchased Ulysse Nardin, which still today is based in its original premises! The emblems of the brand are its Marine and Maxi Marine collections.

> Ulysse Nardin – search all reports since 2000

Ulysse Nardin presents its high jewellery timepiece, an open worked automatic tourbillon embellished with what appears to be a mosaic of hundreds of (...)

On the occasion of Geneva Watch Days, the Swiss watchmaker presents a new line featuring robust open-worked models, using for the first time a platinum (...)

The hero of the new rollout, placed firmly at the top of the last “Diver wave”, is the new Hammerhead Shark Limited Edition, a model strong enough to have (...)

Create a unique sound experience in the form of one exceptional watch, that’s how Ulysse Nardin together with Devialet came up with a fantastic timepiece (...) 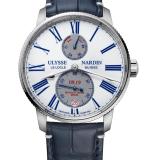 Showcasing its expertise, Ulysse Nardin adorns its new timepiece with a Grand Feu enamel dial. The watchmaker enjoys the mastery of this craft within its (...) 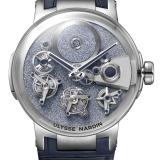 Ulysse Nardin gives a new shine to its Executive Free Wheel by using four daring materials on its dial and barrel cover, making it a visual feast for the (...) 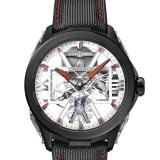 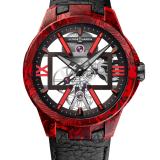 Xplosion on your wrist. With the weather heating up and temperatures rising, Ulysse Nardin has chosen spring 2019 as the ideal time to introduce the (...)