The French luxury leather goods house, established in 1854, did not enter the world of watchmaking until 2002! It had the wisdom to call upon the expertise of specialist manufacturers such as Dubois Dépraz and La Joux-Perret before launching its first model, the Tambour. Louis Vuitton later set up its own premises in La Chaux-de-Fonds and incorporated the expertise from la Fabrique du Temps, a prestige watchmaking workshop based in Geneva, in 2011. “LV” is now increasingly involved in the design and production of movements.

> Louis Vuitton – search all reports since 2000

Portfolio: the laboratory of shapes

Jewellery offers liberties that watchmaking, which has to comply with technical imperatives, does not allow. But this connivance between two related (...)

Since its launch in 2002, the Tambour watch has featured a unique shape and instantly recognisable design. The Tambour Moon, created in 2017, retained the (...) 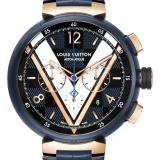 Louis Vuitton presents a new version of its emblematic Tambour watch, inspired by the famous Damier canvas. Like a hallmark or signature, the “V“ for Vuitton (...) 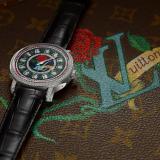 Taking part for the sixth consecutive time in Only Watch, an auction of exceptional watches to raise money for AMM, the Monaco-based association for (...) 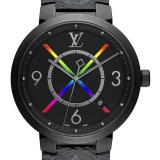 For Autumn-Winter 2019, Virgil Abloh, Artistic Director of the Louis Vuitton Men’s Collections, takes us to the incandescent streets of New York with a (...) 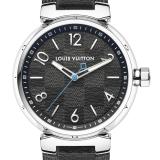 The Tambour watch, unique and recognizable, pays tribute to the first musical instrument whose rhythm is reminiscent of passing time. As a result of a (...) 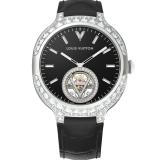 Louis Vuitton completes its High Watchmaking collection with a new flying tourbillon presented in the Voyager case. Louis Vuitton has chosen a Tourbillon (...) 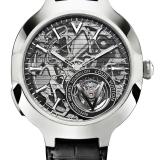 Louis Vuitton presents an exceptional timepiece that brings two worlds together: that of truly modern design, and that of craftsmanship, placing two icons (...)