The two French jewellers Salomon Arpels and Alfred Van Cleef set up their company in 1896 but did not open their first store, at 22, Place Vendôme in Paris, until 1906. The brand then started its formidable rise to fame by progressively opening stores in the new towns frequented by the jet-set: Deauville, Le Touquet, Nice and Monte-Carlo. In 1999 the company was acquired by the Richemont group.

Van Cleef & Arpels produced the world’s first wristwatch (in yellow or white gold) with a leather strap, in 1923. The Padlock wristwatch caused a sensation in 1936, as did the Take-me-Anywhere in 1939. The P.A. 49 with its extra-flat case was presented in 1949. Today the brand transforms watches into objects of art and ingenuity.

The purchase of Tiffany & Co. by LVMH for 15.8 billion dollars heralds a new era of consolidation around supergroups and global brands, in a jewellery (...)

Portfolio: the laboratory of shapes

Jewellery offers liberties that watchmaking, which has to comply with technical imperatives, does not allow. But this connivance between two related (...)

Van Cleef & Arpels: the steps to a fabulous creation

From the first sketch, to the minutely detailed gouache drawings, the jewellery comes to life in the Van Cleef & Arpels workshops on Place Vendôme, (...)

While mechanical watchmaking – the existence of which dates back not millennia but “merely” a few centuries – could conceivably one day dwindle and die out, (...)

“Jewellery will continue to outperform”

In the wake of LVMH’s takeover of Tiffany & Co., the largest transaction in the history of luxury, we wanted to learn more about the dynamics of the (...)

Within a 41 mm case, this 3D scene comes to life thanks to perspective created by a succession of plans and Métiers d’Art. Dancing across the sunrays, a (...)

Love has inspired the Maison since its foundation, infusing the Poetry of Time with its rhythm and offering a vision of watchmaking (...) 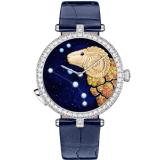 An invitation to live life to the rhythm of the cosmos, the twelve women’s Lady Arpels Zodiac Lumineux models recreate the twinkling of the stars through an (...)