First presented in 2001, Richard Mille watches represented a break with historical traditions and a look forward to new horizons in watchmaking. The distinctive look of a Richard Mille timepiece integrates the latest innovations from research and development into new materials in the worlds of aeronautics and Formula 1.

The result is high-tech watches that use lightweight materials, like the RM 027 model introduced in 2010, which is the lightest tourbillon watch in the world with a movement that weighs a mere 3.83 grammes. World-famous tennis player Rafael Nadal wore this particular model when he won the Roland Garros, Wimbledon and US Open tournaments in the same year.

> Richard Mille – search all reports since 2000

With the RM 21-01, Richard Mille presents a new case design. The complex structure of the case in 5N red gold is reinforced with an exoskeleton in Carbon (...)

The brand whose first model was born in 2001 has reached a time of generational transition. Cécile Guenat has already asserted herself as head of creation (...)

The RM 27-04 balances a lightweight design–at 30 grams including the strap–with tremendous resistance. Its tourbillon calibre, which is suspended within the (...)

Every new creation is a world unto itself. A wholly new space born of a play between spirit and sensation. Singular yet timeless, innovative and (...)

By marrying the performance of a sports watch with the elegance of a round timepiece, Richard Mille has successfully merged two diametrically opposing (...)

The RM 11-04 incorporates the brand’s latest style codes, as seen in the new lines of the crown, its variable-geometry rotor and its ultra-sporty case in (...) 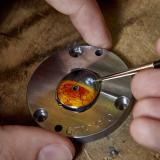 The RM 52-05 rises to the artistic and technical challenge with the kind of ground-breaking ideas. This timepiece features high-tech materials handled in (...)