Ahead of its Annual General Meeting to be held later today in Geneva, Richemont announces that its sales for the five months ended 31 August 2012 increased by 23 % at actual exchange rates. At constant exchange rates, sales increased by 13 %. 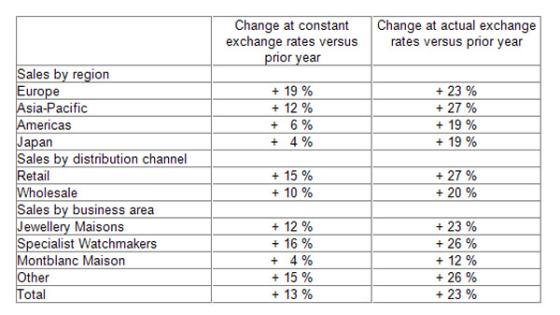 Sales analysis shows continued positive momentum across regions. Europe was strong, particularly in the retail channel in major tourist destinations. Demand in the Asia-Pacific region remained solid after two years of exceptionally high growth. Sales growth in the Americas slowed to 6 % on a constant currency basis, partly due to the timing of exceptional sales in the comparative period. Japan showed resilience.

Retail sales growth was again higher than wholesale sales, reflecting a good performance in the Maisons’ existing boutiques as well as the opening of new boutiques, notably in the Asia-Pacific region.

All business areas enjoyed double-digit growth in sales, with the exception of the Montblanc Maison which did not benefit as greatly from tourist destinations.

Sales growth over the five-month period to August was 13 % at constant exchange rates or 23 % at actual rates. The weakening of the euro against the dollar, in particular, had a positive impact on the Group’s reported sales.

“Underlying sales in the five month period advanced by 13 %. This average includes a declining month-on-month rate of growth. Nevertheless, the average represents a strong performance when measured against the 35 % growth seen in the comparative period last year.

We can confirm that operating profit for the six months should be some 20 to 40 % higher than last year, as was anticipated in the announcement made on 6 August.

The increase in net profit for the six-month period is also likely to be in that range, notwithstanding the impact of a number of factors, including mark-to-market adjustments in terms of the Group’s foreign exchange hedging programme. Such adjustments will only be determined at the end of September.

The prevailing economic uncertainties, the moderation in sales growth since May and the very strong basis of comparison do not prevent us from maintaining our ambitious investment programme. Indeed we remain confident in the long term potential of our Maisons.”

Richemont’s interim results for the six-month period to 30 September 2012 will be released on 9 November 2012.