•Cashflow from operations of € 575 million 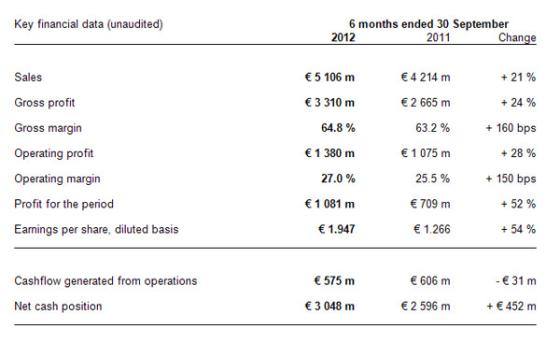 Sales in the six-month period increased by 21 % at actual exchange rates, or by 12 % at constant exchange rates. The increase in sales reflected, in particular, sales growth in the Group’s own retail network, bolstered by very strong demand in Europe during the period. Further details of sales by region, distribution channel and business area are given in the Review of Operations on pages 5 to 8.

Operating profit increased by 28 %, reflecting the significant increase in gross profit, offset by an increase in operating expenses of 21 %, or 14 % at constant exchange rates.

Selling and distribution expenses were 23 % higher, reflecting in particular the increase in sales in the Maisons’ own boutique networks. Communication expenses also increased by 23 % and represented 8 % of sales. Administration costs rose by 19 % and reflected the expansion of certain of the Group’s shared service platforms.

As a consequence, operating margin increased by 150 basis points to 27.0 % in the period under review.