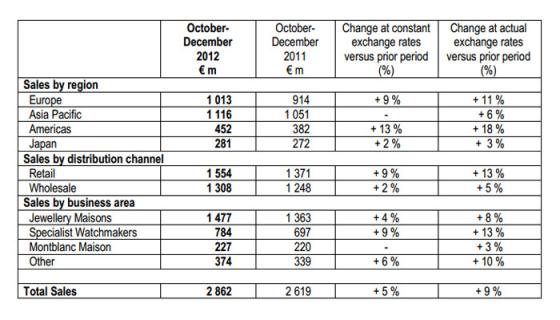 Review of Trading in the Three-Month Period

The following comments refer to changes at constant exchange rates.

The performance was highlighted by robust jewellery sales and continued retail channel momentum. This was offset by a relatively weak wholesale channel, reflecting a cautious approach by the Group’s retail partners in the watch business.

Following several years of exceptional growth in the Asia Pacific region, in particular China, sales were flat compared to the demanding comparative figures for the same quarter last year. While wholesale sales growth was lower than in the first six months and in the comparative period due to the cautious approach taken by the Group’s retail partners in Hong Kong and mainland China, boutique openings contributed to the positive trend in retail sales.

Sales in Japan grew by 2 %; a slightly lower rate than that seen during the first six months of the year.

At this stage, it is unclear how business patterns may develop and how the business in the Asia Pacific region will evolve in the near future. Richemont takes a long-term view in managing its business and will continue to invest in the development of its Maisons.

Retail sales growth slowed compared to the 15 % growth rate seen in the six months to September.

Wholesale sales also slowed compared to the 8 % rate of the first six months, reflecting the caution of our retail partners and the less favourable retail environment, particularly in the Asia Pacific region.

The Group’s Specialist Watchmakers performed well during the period. Retail sales through the Maisons’ own boutiques were the principal driver of growth. The overall increase of 9 % reflects good double-digit growth in most cases, although sales were lower for Maisons which are more focused on the Asia Pacific region and which had the strongest comparatives in the comparative period.

Sales of the Montblanc Maison were in line with the comparative period, with retail sales growth offsetting a decrease in sales to retail partners.

In the Group’s other businesses, Net-a-Porter and Chloé reported good growth compared to the prior period.

Trading in the Nine-Month Period

Sales growth over the nine-month period to December was 9 % at constant exchange rates or 17 % at actual rates. The weakening of the euro against the dollar, in particular, had a positive impact on the Group’s reported sales. Sales for the nine months ended 31 December 2012 are presented in Appendix 1a.

The Group’s results for the current financial year will be announced on Thursday, 16 May 2013.

The Company’s annual general meeting will be held in Geneva on Thursday, 12 September 2013.