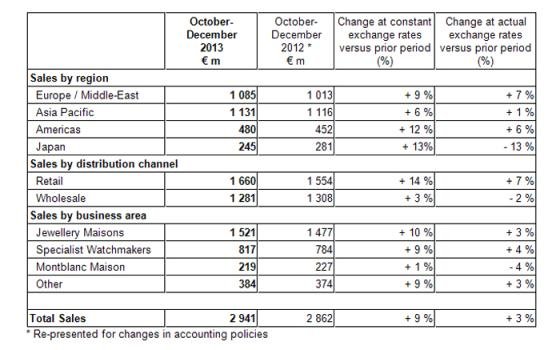 Overall, the third quarter was in line with the trends seen in the first six months of the financial year.

The following comments refer to changes at constant exchange rates.

The period’s performance reflected continuing demand for jewellery and watches, particularly through the Group’s retail channel. Compared to retail, slower growth in the wholesale channel reflected caution amongst the Group’s business partners, primarily in the Asia Pacific region.

The performance in Europe and the Middle East was satisfactory. Sales continued to benefit from visitors to the region’s major tourist destinations.

In Asia Pacific, growth remained relatively consistent with the trend seen in the first six months of the current financial year, taking into account the less challenging figures during the comparable three-month period. All major markets reported growth, except for mainland China, which reported lower sales.

Sales growth in the Americas region was good, led by robust retail demand, in particular in jewellery and at the Net-a-Porter Group.

Domestic purchases in Japan remained strong, although the rate of sales growth slowed down compared to the first six months of the current financial year.

The Jewellery Maisons reported solid sales growth in their own boutique networks. The retail network performance benefitted from jewellery sales in particular.

The Group’s Specialist Watchmakers enjoyed continued growth during the period, albeit at a lower rate than the first six months of the year.

Sales of the Montblanc Maison were in line with the comparative period.

In the Group’s other businesses, the Net-a-Porter Group continued to report growth well above the Group average.

Sales growth over the nine-month period to December was 9 % at constant exchange rates or 4 % at actual rates. The strengthening of the euro against the dollar and yen had a negative impact on the Group’s reported sales. Sales for the nine months ended 31 December 2013 are presented in Appendix 1a.

The Group’s results for the current financial year will be announced on Thursday, 15 May 2014.

The Company’s annual general meeting will be held in Geneva on Wednesday, 17 September 2014.