Moderate growth at a high level Overall, 2013 was a good year for the Swiss watch industry. Exports attained a record level equivalent to 21.8 billion francs. This total exceeds by 400 million francs the value recorded in 2012 and corresponds to an increase of 1.9%. Expected to be a year of consolidation at a high level, 2013 lived up to its promise. While the annualised variation has clearly slowed since the end of 2012, falling from +11.0% to +1.9%, it remained positive nonetheless throughout the year.

True to forecasts, the second half-year (+3.0%) proved better than the first (+0.7%). The slowdown in growth was mainly observed in the first half of the year, which registered three months of negative figures. The July-December period showed regular gains, allowing the annualised variation to stabilise at its present level.

On the strength of this solid base, watch exports should continue to grow in 2014. Initial estimates indicate a higher rate of growth than in 2013 to which all regions will contribute, even if the rate of growth is likely to be more moderate in the Far East.

Products Watches accounted for nearly 95% of the total value of exports in 2013. They recorded growth of 2.0%, to 20.6 billion francs. In volume terms, Switzerland exported 28.1 million timepieces. This represents a decline of just over one million units (-3.6%) compared to 2012. The main materials contributing to these trends were steel (+4.9% by value) and the category of other metals (+15.7%), while precious metals remained stable (-0.3%). In volume terms, the categories of other materials (-8.4%) and other metals (-11.7%) weakened the overall result. The increase in steel watches (+1.0%) by no means sufficed to offset this downturn.

Results were mixed according to price segments. Watches costing less than 200 francs (export price) saw their volumes fall 8.5%, to 18.2 million units. The 200-500 francs category stood out with very considerable increases throughout the year, both in volume terms (+14.2%) and by value (+12.7%). Above 500 francs, variations were less marked. The value of timepieces between 500 and 3,000 francs fell slightly (-1.4%) while volumes remained stable (+0.2%). Timepieces in excess of 3,000 francs made a significant All the figures released by FH refer to exports data and not to sales to end-consumers. Differences between these two types of data may therefore exist.

These data must be regarded as consolidated figures gathering export results from all Swiss watch companies. They obviously cannot reflect the individual results of one particular company or group of companies, knowing that business activity may greatly vary from one to the other. contribution to the increase in total value, with growth of 2.8%.

Markets The growth in watch exports was attributable mainly to Europe, particularly in the first half of the year. Asia recorded a negative start to the year, but became a driving force from the summer. The American continent registered moderate but very uniform growth. 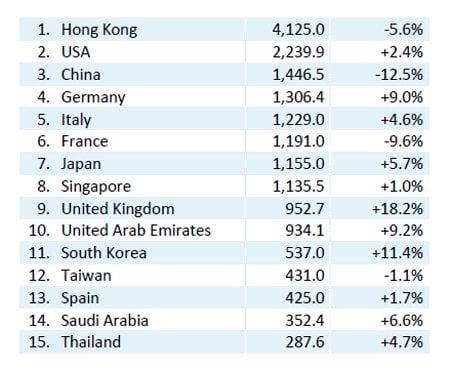 During the year 2013, the fifteen main markets showed the following trend (total value in million francs and % variation by comparison with 2012)

Most of the Swiss watch industry’s 15 main export markets registered gains. An exception was Hong Kong, which recorded negative results for two-thirds of the year and ended the year with a decline of 5.6%. The United States saw their rate of growth slow, and subsequently stabilise in the second part of the year, in line with the global average. After a lacklustre 2012, China recorded the worst result across the board (-12.5%). It posted some significant downturns, particularly in the first half-year.

In Europe, several markets played an important role for Swiss watch exports. Germany continued to set the pace on the Old Continent, with a pronounced increase (+9.0%). Italy also contributed to the upturn, albeit more modestly (+4.6%). France, where the situation deteriorated sharply in the spring and summer, ended the year on a very low note (-9.6%). In ninth position, the United Kingdom registered one of the highest year-on-year increases (+18.2%) and experienced a slowdown only in the fourth quarter.

Among the other Asian markets, Japan and Thailand registered an above average performance, Singapore and Taiwan showed little if any variation, and the Middle East recorded a two-digit increase (+10.7%).