The year 2014 came to a close in a more difficult context for the Swiss watch industry, however exports by the sector continued to grow. The annual result recorded a total value of 22.2 billion francs, corresponding to an increase of 1.9% compared to 2013. As in 2013, which recorded exactly the same rate of growth, 2014 will have been a year of consolidation at a high level. Mention must be made however of the negative trend observed in November and December, linked to the autumn events in Hong Kong and the decline of the Chinese market.

Watch exports remained positive over the year, despite a gradual loss of momentum. While the first half-year saw an increase in value of 3.1%, growth was only 0.8% in the second half. Meanwhile the fourth quarter was marginally negative, with a decline of -0.3%. Even if this downturn is not hugely significant in itself, the emerging trend in recent months points to a more difficult situation for Swiss watch exports, not to mention serious consequences attributable to the strength of the franc.

In an environment which is clearly less robust, forecasts have been revised. In 2015, watch exports are expected to remain stable in relation to 2014. Exchange rate fluctuations in particular will continue to be monitored closely and the results of the first months of 2015 will be decisive in assessing the general situation.

Products Exports by the Swiss watch industry consisted essentially of wristwatches. With a value of 21.0 billion francs, these accounted for nearly 95% of total exports. This result exceeded that of 2013 by 1.7%. In parallel, the number of timepieces exported also rose by 1.7%. Thus, 28.6 million watches left Switzerland in 2014, almost half a million more than in 2013.

Growth was buoyed by mechanical watches, which recorded upturns both in value and volume terms (+3.4% and +8.8% respectively). They accounted for just over a quarter of timepieces exported and generated nearly 80% of sales. Quartz watches stagnated in volume terms (-0.9%) and lost several points in terms of value (-4.1%).

The main materials progressed uniformly by value, staying very close to the sector average. In volume terms, All the figures released by FH refer to exports data and not to sales to end-consumers. Differences between these two types of data may therefore exist. These data must be regarded as consolidated figures gathering export results from all Swiss watch companies. They obviously cannot reflect the individual results of one particular company or group of companies, knowing that business activity may greatly vary from one to the other.

Steel, which accounted for more than one in every two watches exported, registered the same high level as in 2013. For the year as a whole, the category of other materials rose sharply by volume (+14.7%), whereas the category of other metals recorded a steep downturn (-19.4%). These contrasting trends offset one another, resulting in an overall increase of 1.7%.

Among the different price segments, growth was a common feature of 2014. Watches costing less than 200 francs (export price) accounted for half the rise in volumes. The 200-500 franc category slowed its rate of growth but remained the most dynamic of 2014. Watches between 500 and 3,000 francs remained relatively stable compared to 2013. The higher-price segment rose by 2.7% (in value and volume terms) and contributed greatly to the increase in total value.

Markets During the year 2014, the fifteen main markets showed the following trend (total value in million francs and % variation by comparison with 2013): 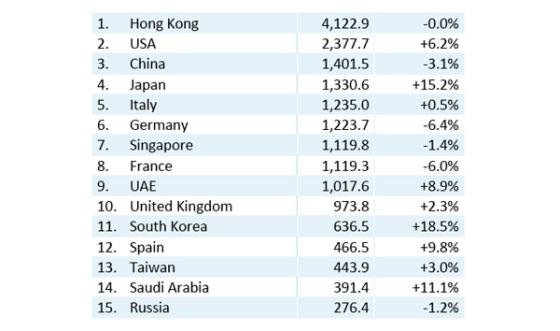 The American continent (+4.5%) recorded above-average growth, thanks mainly to the United States (+6.2%) where the rate of growth was higher still. Asia recorded an upturn of 2.8%, albeit with disparities between markets. Hong Kong (-0.0%) attained the same level as in 2013.

The leading market for Swiss watch exports staged a recovery in the first half-year, but showed little movement in the second half, before hitting a wall at the end of the period. On a broader scale, China showed the same profile however the final result was negative (-3.1%). Despite a slowdown which took effect in September, Japan (+15.2%) ended the year with an excellent result. Middle Eastern markets also registered strong increases, however the best performer was South Korea (+18.5%) which continued to surge ahead.