As no surprise to many, 2014 was the “year of the smartwatch”. But what is more surprising is the projection for the smartwatch segment for 2018.

The first generation of smartwatches have actually been on the market for some years. In 2012, the category was led by start-up brand Pebble, which had to rely on crowd-funding to get off the ground. So the release of the Apple Watch was not something all that shocking, but it was definitely impactful. Consumer interest in smartwatches – especially notable in the United States, China, the United Kingdom, Germany, Spain and Italy - clearly picked up immediately following the September 2014 announcement of the Apple Watch. Who said marketing and public relations don’t work? 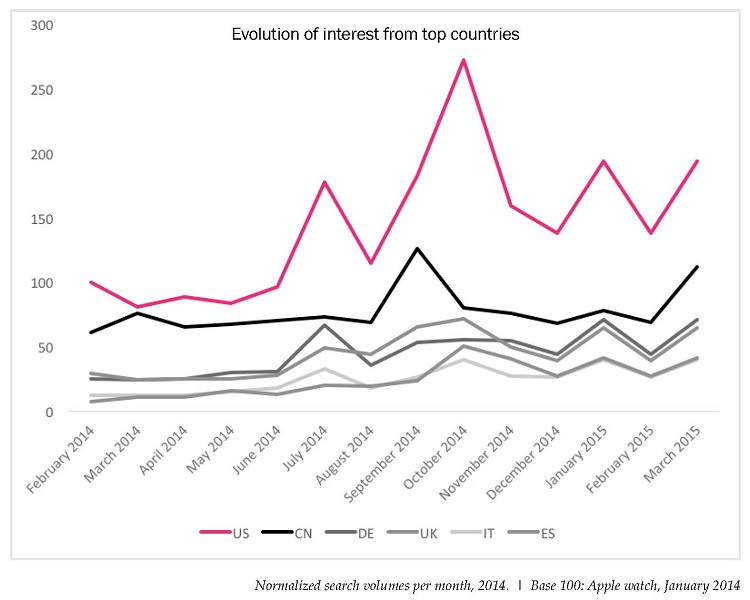 Interestingly, the announcement by Apple resulted in increased interest for all smartwatches across the board, not just the Apple Watch. But still, Digital Luxury Group sees the Apple Watch as “the leader that will establish the market for smartwatch brands”.

Yet, Digital Luxury Group is skeptical as to Apple’s ability to sell their watch as a luxury good. After all, this was the intent of the Apple Watch Edition collection, which starts at around $10,000. According to David Sadigh, Founder and CEO at Digital Luxury Group, “We anticipate Apple to generate 80% of their sales with Apple Watches priced under $700, a segment that will have more impact on American and Japanese watchmakers than on Swiss ones.”

Eventually, traditional mechanical watch brands from Switzerland entered the “smart” game, despite initial hesitance. But Digital Luxury Group finds that consumer interest was already significant even before they announced any smartwatch project.

Among luxury brands with the most searches related to the keyword “smartwatch” during the last year, Tag Heuer leads the way by far. It is followed by Rolex and Montblanc. It’s no wonder that Tag Heuer is working hard on developing its smartwatch game since the announcement of the Apple Watch! But alas, it was Montblanc that made the first move among the luxury players, with its launch of the E-strap in January 2015. 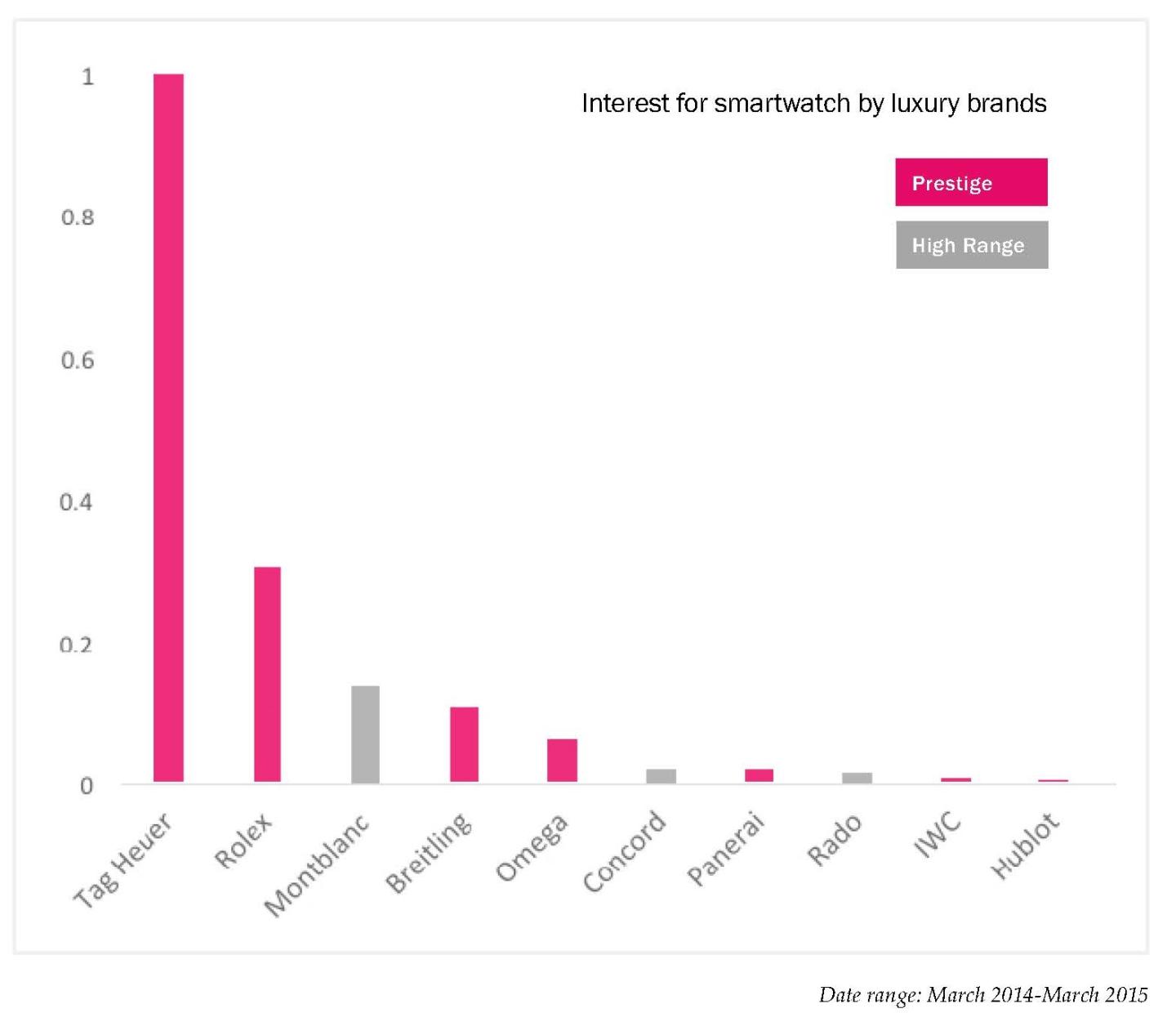 But don’t expect any smartwatch releases from the high end luxury brands, including second-placed Rolex. According to the analysis by Digital Luxury Group, brands will only enter the smart game at a certain price range. In fact, smartwatch offers by luxury Swiss watch brands come in at a (significantly) lower price point than the Apple Watch Edition models.

Mechanical watch alternatives with smart functionality are usually priced round 5,000 USD, while the Apple Watch Edition hovers around the 14,000 USD mark. This is one reason why Digital Luxury Group is sceptical of Apple’s ability to really push its luxury smartwatch models. 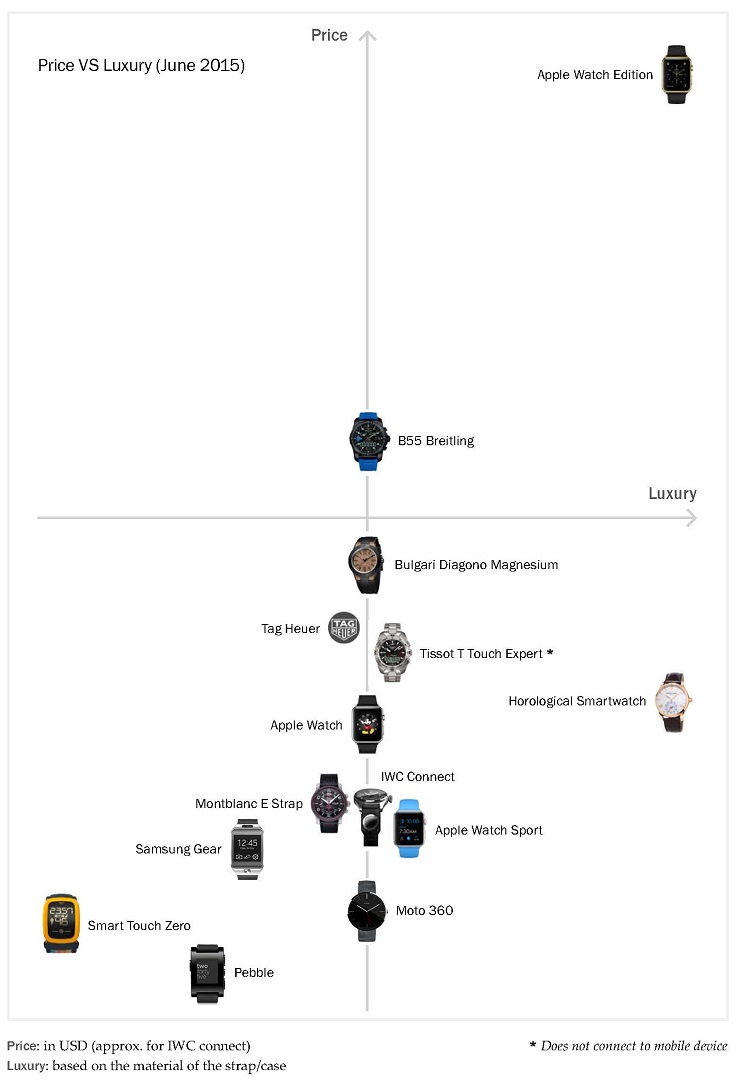 What to expect moving forward

It’s clear that consumer interest is there for smartwatches, for both new brands and the established Swiss mechanical watchmakers. The trends show that 2014 was arguably the year of the smartwatch. But the segment is expected to accelerate even further. Pascal Koenig, managing director of the Smartwatch Group has even argued that: “In 2018, the global smartwatch industry will surpass the size of the conventional watch industry.”

Just to put this into perspective, for the smartwatch market to surpass the conventional watch industry, its growth would need to be about 140% each year over the next four years! Those are staggering numbers, indeed. (VJ)