The Swiss watchmaker has launched the second limited edition watch made in the memory of Carl Brashear, a bronze-cased, two-counter chronograph to honour one of the most inspirational figures of the 20th century.

The Swiss watchmaker has launched the second limited edition watch made in the memory of Carl Brashear, a bronze-cased, two-counter chronograph to honour one of the most inspirational figures of the 20th century.

From time to time, we receive a press release about a new watch project that’s truly inspirational. That was the case recently, when I discovered the Oris Carl Brashear Chronograph Limited Edition.

I must admit that I wasn’t familiar with Carl Brashear until now, and many of you might not be as well – although true Oris fan might have come across the name in an earlier limited edition bearing his name.

Brashear joined the U.S. Navy in 1948 at the age of 17, just after the U.S. Military desegregated. In 1966, he unfortunately lost the lower part of his left leg during a mission to salvage a hydrogen bomb!

Even after all that, by 1968 he became the U.S. Navy’s first amputee diver and qualified as a Master Diver. His extraordinary story was the inspiration for the film “Men of Honour”, in which he was portrayed by Oscar-winning actor Cuba Gooding Jr.

In short, he was a truly inspirational figure of the 20th century, defying racial tensions, disability, and indeed the weight of history itself.

For such a special individual, Oris has once again created a special watch. It is based on the brand’s Divers Sixty-Five and it is powered by the Calibre 771 automatic movement. Based on the Sellita SW 510, this is the first appearance for the movement in the Oris collection.

The watch uses bronze for its case, bezel, crown and pushers, inspired by the bronze diving equipment used by Brashear.

Bronze is a unique material as far as watchmaking is concerned. In fact, this is only the second time that Oris has used it for the case of a wristwatch. And you guessed it, the only other time it used bronze was for the first limited edition made in Carl Brashear’s name.

What I like about bronze is that it provides a nice warm look to the watch. Here, it is nicely paired with a deep blue dial, a reminder of Brashear’s deep dives. Bronze also develops a nice patina over time, meaning that each one of the 4,500 Swiss franc timepieces will look unique in no time. 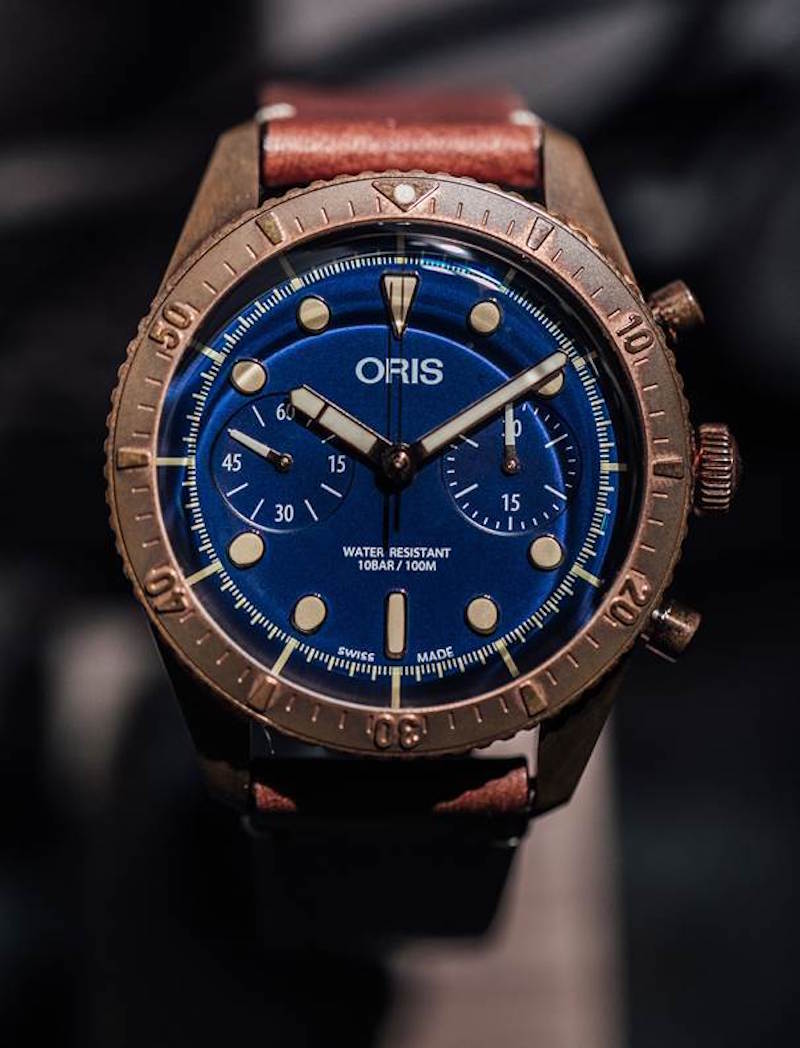 The overall result is a handsome and balanced watch. It is defined by its proud bronze case and symmetrical bicompax layout, which gives the watch that classic and sporty chronograph look.

No doubt a great homage for the great Carl Brashear, whose mantra ‘It’s not a sin to get knocked down, it’s a sin to stay down’ can be found on the stainless steel case back. A nice reminder to have indeed.