Bell & Ross (really) takes off to the skies


The watchmaker has designed its very own plane, the BR-Bird, which inspires two new Racing Bird watches: a new three-hand and chronograph model.

Bell & Ross (really) takes off to the skies

The watchmaker has designed its very own plane, the BR-Bird, which inspires two new Racing Bird watches: a new three-hand and chronograph model.

From the thousands of press releases we receive each year, I can’t describe to you how many times I’ve read a press release about a new pilot’s watch, and the text has something to do with the brand “lifting off” or “taking to the skies”.

But when I say that Bell & Ross has now taken to the sky, you should take it quite literally. It’s not often that we can announce that a watch brand has designed a plane of its own, and now Bell & Ross has actually gone and done it.

As impressive as that is, it’s not too much of a surprise. After all, the brand’s history is intimately tied to the aviation industry. Plus the watchmaker has a strong record of creating incredible machines that embody the quest for speed and performance. They include the B-Rocket, AeroGT and Bellytanker, and they have been the source of inspiration of many exceptional Bell & Ross limited edition watches.

The latest in that line of adventures in the BR-Bird, conceived by Bruno Belamich, Bell & Ross’s co-founder and creative director. It is an ultramodern single-seat, propeller aircraft powered by a V12 Rolls Royce engine. The plane can reach a speed of 909 km/h, which is about the speed at which modern passenger jets fly – and this is a propeller plane!

Adding that kind of power to a fuselage built from high-tech materials like graphite, fiberglass, titanium, and aluminum alloy allows for a very recognizable design that also delivers fantastic maneuverability. 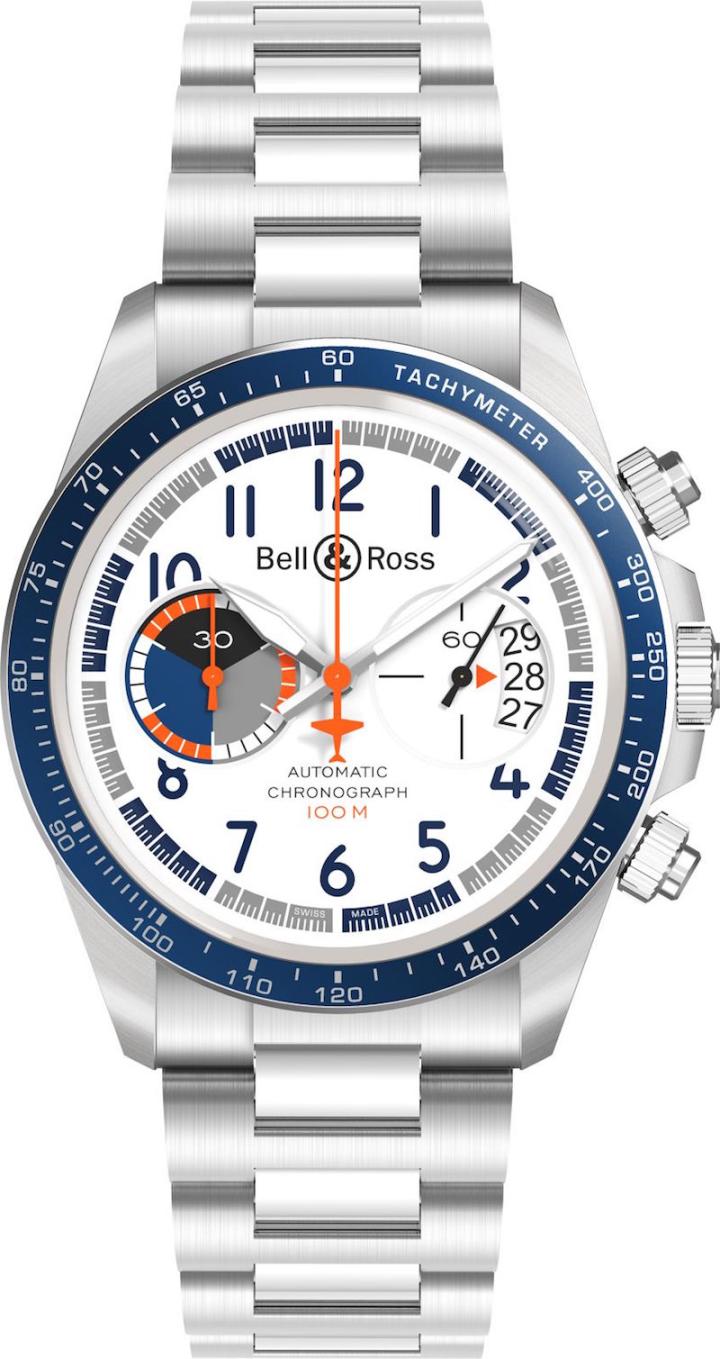 So why design a racing plane, besides the knock-on objectives to release new watches? Apparently the goal is to compete in the Reno Air Races. Every year at the edge of the American desert aircrafts compete by flying at full speed and at very low altitude on a closed circuit delineated by 10-metre-high pylons.

To have any change of winning, pilots need to be as daring as they are dexterous, and the competition has been pushing the best of the best to their limits for nearly a century now.

Until the race takes place, we can focus on the watches: two limited editions that carry the name of the plane and also evoke the same design elements of speed and performance. 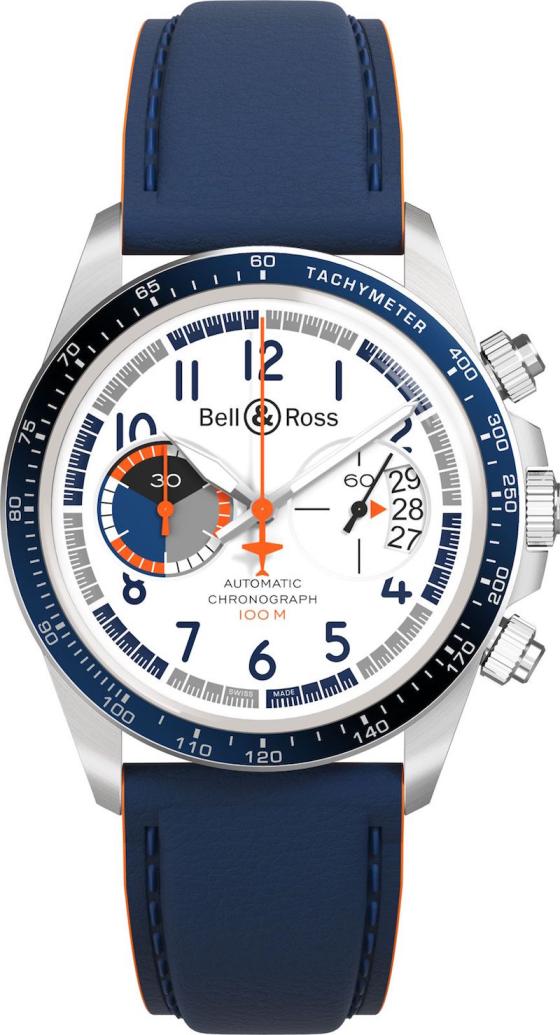 The colourways of the timepieces sport white dials that match the fuselage of the racing plane. The numerals, bezel, chronograph counter and strap are blue, just like the empennage and decorative elements that trace the aerodynamic lines of the BR-Bird. We also see finer details in orange, including on the central second hand, dial and lining of the leather strap.

The pop of colour helps to highlight the most important information on dial, as it does on the plane’s flight instruments. Grey has also been used to bridge the contrast between the blue and orange, and we see it on the timer of the chronograph and the Bell & Ross logo.

As a final touch, the silhouette of the aircraft can be found on the case back, at the base of the second hand on the three-hand version, and the second timer on the chronograph model.

In terms of performance, automatic movements power both watches. In the case of the three-hand BRV1-92 model it’s the BR-CAL.302, which is housed in a relatively compact 38.5mm steel case. The chronograph version is powered by a movement from the same family, the BR-CAL.301, and it is packed in a slightly larger 41 mm steel case.

The new Racing Bird watches are available in a limited edition of 999 pieces each. Based on their sporty and captivating designs, there’s a chance they will fly off the shelves as fast as the BR-Bird can soar.