Born in Austin, made in Switzerland


Tockr, a new American watch brand, made its debut in October 2017 with unique designs, top of the line Swiss made quality and accessible price points for watch enthusiasts of all levels.

Born in Austin, made in Switzerland

Tockr, a new American watch brand, made its debut in October 2017 with unique designs, top of the line Swiss made quality and accessible price points for watch enthusiasts of all levels.
T

ockr originates in Austin Texas, the hometown of the brand’s founder Austin Ivey, who wanted his next endeavour to involve his two lifelong passions, watches and aviation. Austin’s inspiration can be traced back to his grandfather, a US Army pilot who flew C47 aircraft during World War II. He founded the brand with watch consultant Sophy Rindler. 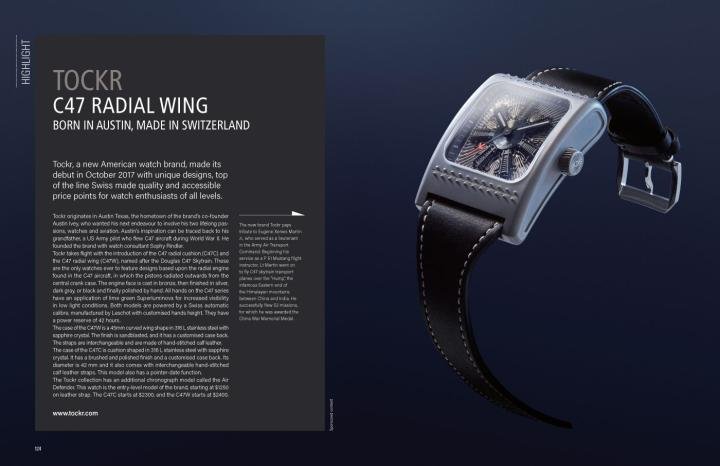 Click on the image to enlarge - PDF
The new brand Tockr pays tribute to Eugene Xerxes Martin Jr., who served as a lieutenant in the Army Air Transport Command. Beginning his service as a P 51 Mustang flight instructor, Lt Martin went on to fly C47 skytrain transport planes over the “Hump”, the infamous Eastern end of the Himalayan mountains between China and India. He successfully flew 52 missions, for which he was awarded the China War Memorial Medal.Sponsored Content

Tockr takes flight with the introduction of the C47 radial cushion (C47C) and the C47 radial wing (C47W), named after the Douglas C47 Skytrain. These are the only watches ever to feature designs based upon the radial engine found in the C47 aircraft, in which the pistons radiated outwards from the central crank case. The engine face is cast in bronze, then finished in silver, dark gray, or black and finally polished by hand. All hands on the C47 series have an application of lime green Superluminova for increased visibility in low light conditions. Both models are powered by a Swiss automatic calibre, manufactured by Leschot with customised hands height. They have a power reserve of 42 hours.

The case of the C47W is a 45mm curved wing shape in 316 L stainless steel with sapphire crystal. The finish is sandblasted, and it has a customised case back. The straps are interchangeable and are made of hand-stitched calf leather. The case of the C47C is cushion shaped in 316 L stainless steel with sapphire crystal. It has a brushed and polished finish and a customised case back. Its diameter is 42 mm and it also comes with interchangeable hand-stitched calf leather straps. This model also has a pointer-date function. The Tockr collection has an additional chronograph model called the Air Defender. This watch is the entry-level model of the brand, starting at $1250 on leather strap. The C47C starts at $2300, and the C47W starts at $2400.