In unveiling the first ever skeleton version of its Neo Tourbillon with Three Bridges, Girard-Perregaux is showcasing a new exercise in horological architecture, making light of gravity, mass and opacity.

In unveiling the first ever skeleton version of its Neo Tourbillon with Three Bridges, Girard-Perregaux is showcasing a new exercise in horological architecture, making light of gravity, mass and opacity.
T

he Neo Tourbillon with Three Bridges Skeleton is crisscrossed with slen- der black finely rounded bridges. Their curves and cut-outs define the structure of the visual e ect and support an incredibly slim mechanical structure. The ethereal suspended masses appear truly improbable given the extreme transparency of this complex calibre. Stretched like cables over a precipice, the bridges of the skeleton calibre are a nod to the architecture of their monumental counterparts around the world, such as the Millau Viaduct. 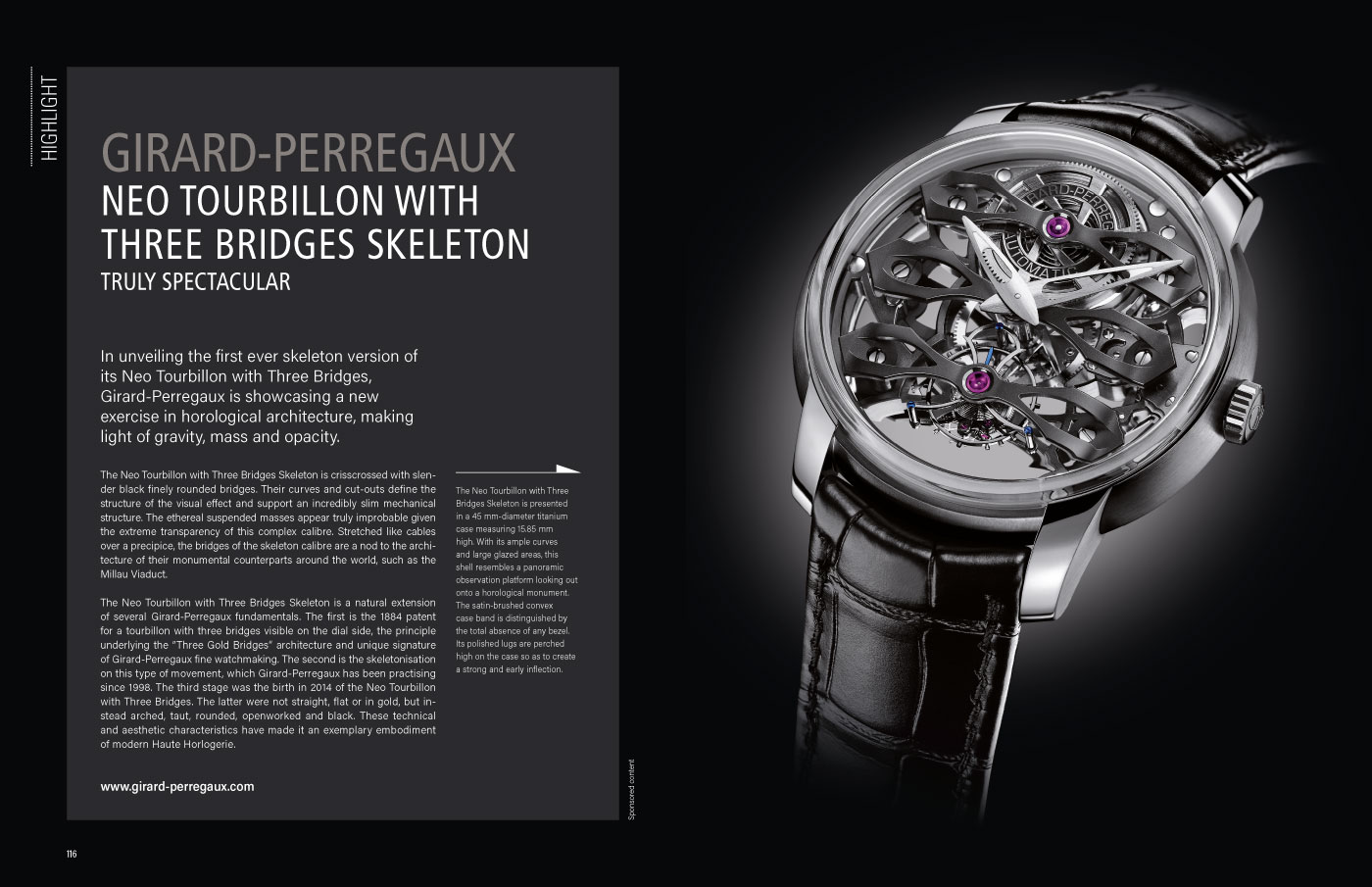 Click on the image to enlarge PDF
The Neo Tourbillon with Three Bridges Skeleton is presented in a 45 mm-diameter titanium case measuring 15.85 mm high. With its ample curves and large glazed areas, this shell resembles a panoramic observation platform looking out onto a horological monument. The satin-brushed convex case band is distinguished by the total absence of any bezel. Its polished lugs are perched high on the case so as to create a strong and early inflection.Sponsored Content

The Neo Tourbillon with Three Bridges Skeleton is a natural extension of several Girard-Perregaux fundamentals. The first is the 1884 patent for a tourbillon with three bridges visible on the dial side, the principle underlying the “Three Gold Bridges” architecture and unique signature of Girard-Perregaux fine watchmaking. The second is the skeletonisation on this type of movement, which Girard-Perregaux has been practising since 1998. The third stage was the birth in 2014 of the Neo Tourbillon with Three Bridges. The latter were not straight, flat or in gold, but in- stead arched, taut, rounded, openworked and black. These technical and aesthetic characteristics have made it an exemplary embodiment of modern Haute Horlogerie.