THE START OF A BRIGHT FUTURE


The world’s leading manufacturer of the trigalight self-powered illumination technology has inaugurated a one-of-a-kind new building in Niederwangen, near Berne, to meet challenging new demands.

THE START OF A BRIGHT FUTURE

The world’s leading manufacturer of the trigalight self-powered illumination technology has inaugurated a one-of-a-kind new building in Niederwangen, near Berne, to meet challenging new demands.
T

he world’s leading manufacturer of the trigalight self-powered illumination technology has inaugurated a one-of-a-kind new building in Niederwangen, near Berne, to meet challenging new demands. 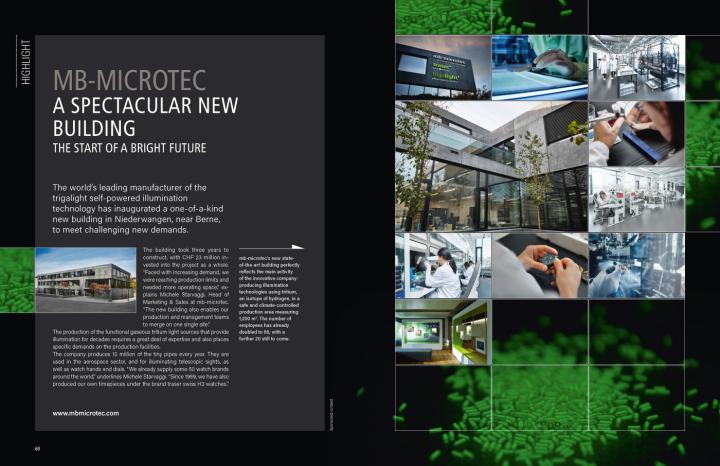 Click on the image to enlarge PDF
mb-microtec’s new stateof- the-art building perfectly reflects the main activity of the innovative company: producing illumination technologies using tritium, an isotope of hydrogen, in a safe and climate-controlled production area measuring 1,200 m2. The number of employees has already doubled to 80, with a further 20 still to come.

The building took three years to construct, with CHF 23 million invested into the project as a whole. “Faced with increasing demand, we were reaching production limits and needed more operating space,” explains Michele Starvaggi, Head of Marketing & Sales at mb-microtec.

“The new building also enables our production and management teams to merge on one single site.”

The production of the functional gaseous tritium light sources that provide illumination for decades requires a great deal of expertise and also places specific demands on the production facilities. The company produces 15 million of the tiny pipes every year. They are used in the aerospace sector, and for illuminating telescopic sights, as well as watch hands and dials. “We already supply some 50 watch brands around the world,” underlines Michele Starvaggi. “Since 1989, we have also produced our own timepieces under the brand traser swiss H3 watches.”