For several decades, Hamilton has maintained strong ties with Hollywood, and its models have been seen in major movies, as seen in numerous articles from the Europa Star archives. The latest venture in this vein is the launch of the Hamilton Khaki Field Murph, a timepiece that played a key part in the 2014 American blockbuster Interstellar. It is now available to aficionados around the world.

For several decades, Hamilton has maintained strong ties with Hollywood, and its models have been seen in major movies, as seen in numerous articles from the Europa Star archives. The latest venture in this vein is the launch of the Hamilton Khaki Field Murph, a timepiece that played a key part in the 2014 American blockbuster Interstellar. It is now available to aficionados around the world.

HAMILTON AND HOLLYWOOD: A RETROSPECTIVE

The Swiss made brand with an American spirit was founded in 1892 in Lancaster, Pennsylvania. Known for its innovative design, Hamilton has a strong foothold in Hollywood, with products appearing in more than 500 films.

This is readily observed from the archives of Europa Star, which has followed the evolution of Hamilton for the last 90 years. Here are a few examples, from movies such as 1961’s “Blue Hawaii” starring Elvis Presley, to the classic 1968 “2001: A Space Odyssey” by Stanley Kubrick, which all featured Hamilton timepieces on the big screen.

Here are some of our archives showing the long relationship between Hamilton and Hollywood:

“Hamilton designed a watch for space travelers and a clock for spaceship instruments panels”, Europa Star wrote in 1967, a few months before the official release of the iconic movie 2001: A Space Odyssey (Europa Star, n°45, 1967). 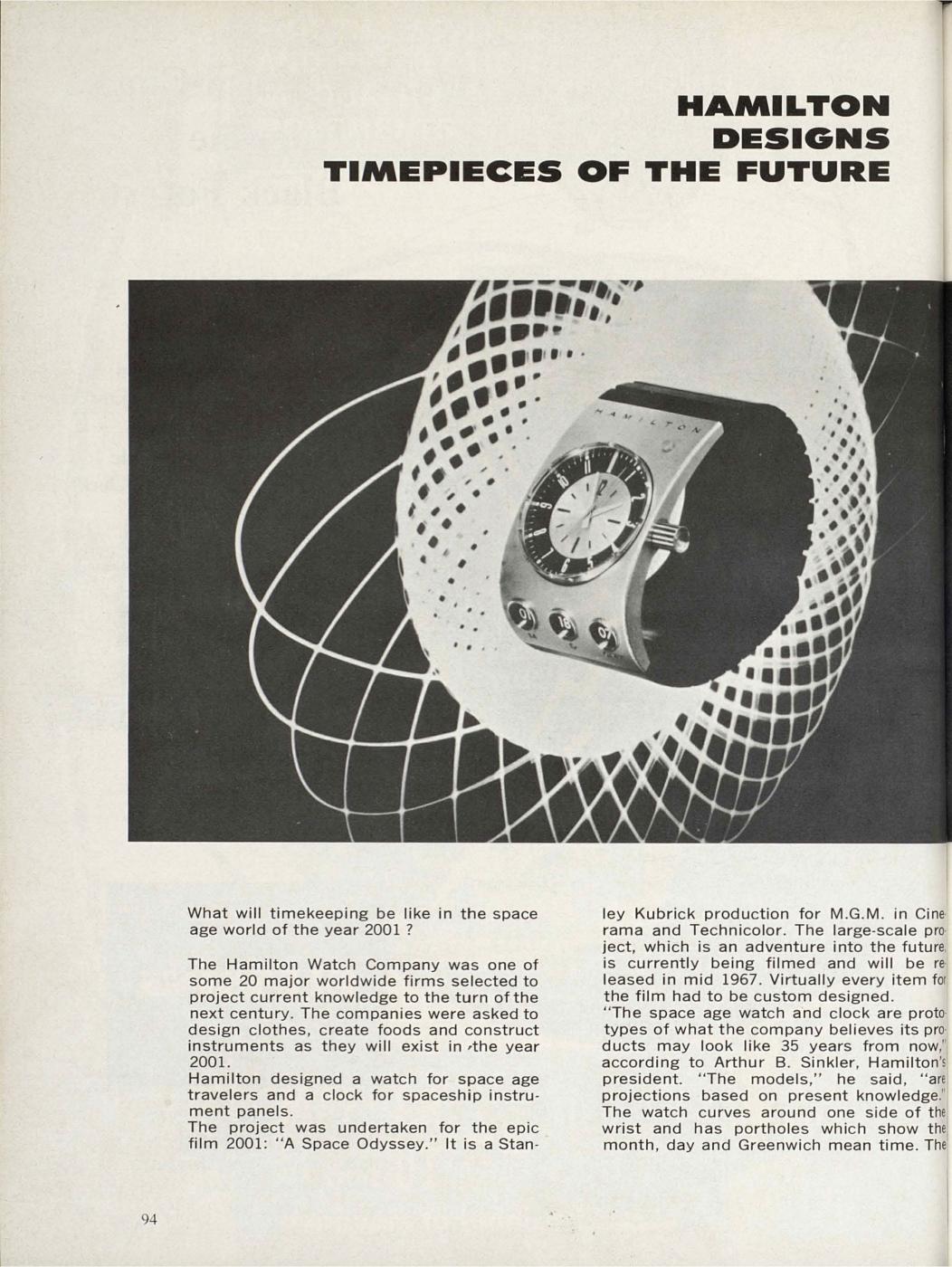 Decades before Interstellar and years before 2001: A Space Odyssey, Hamilton had already “constructed a Mars clock and calendar” (Europa Star, n°45, 1967). 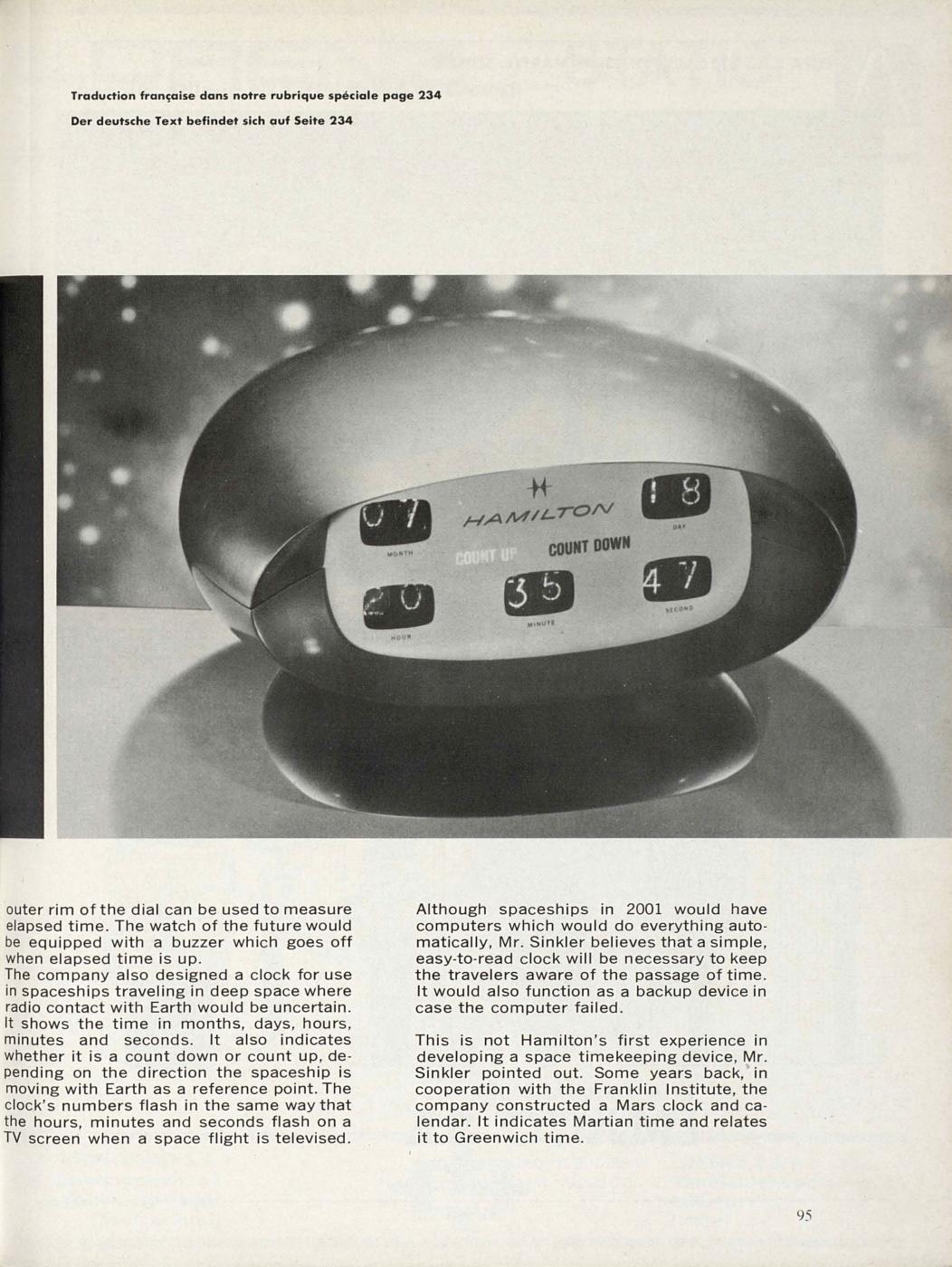 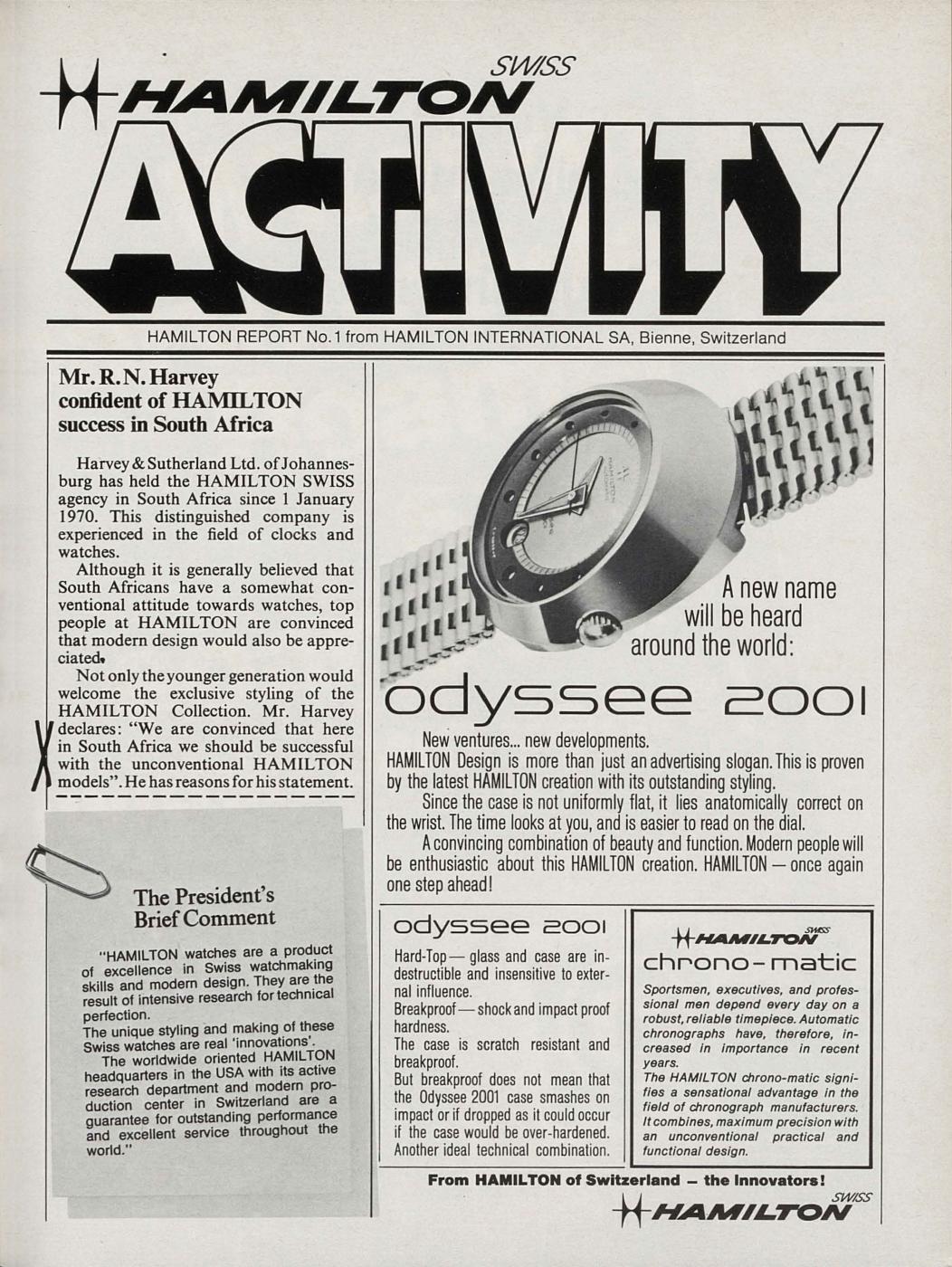 It was in the 1961 movie Blue Hawaii that Elvis Presley appeared on screen with the Hamilton Electric Ventura and its striking “boomerang-shaped” case (Europa Star, n°238, 2000). 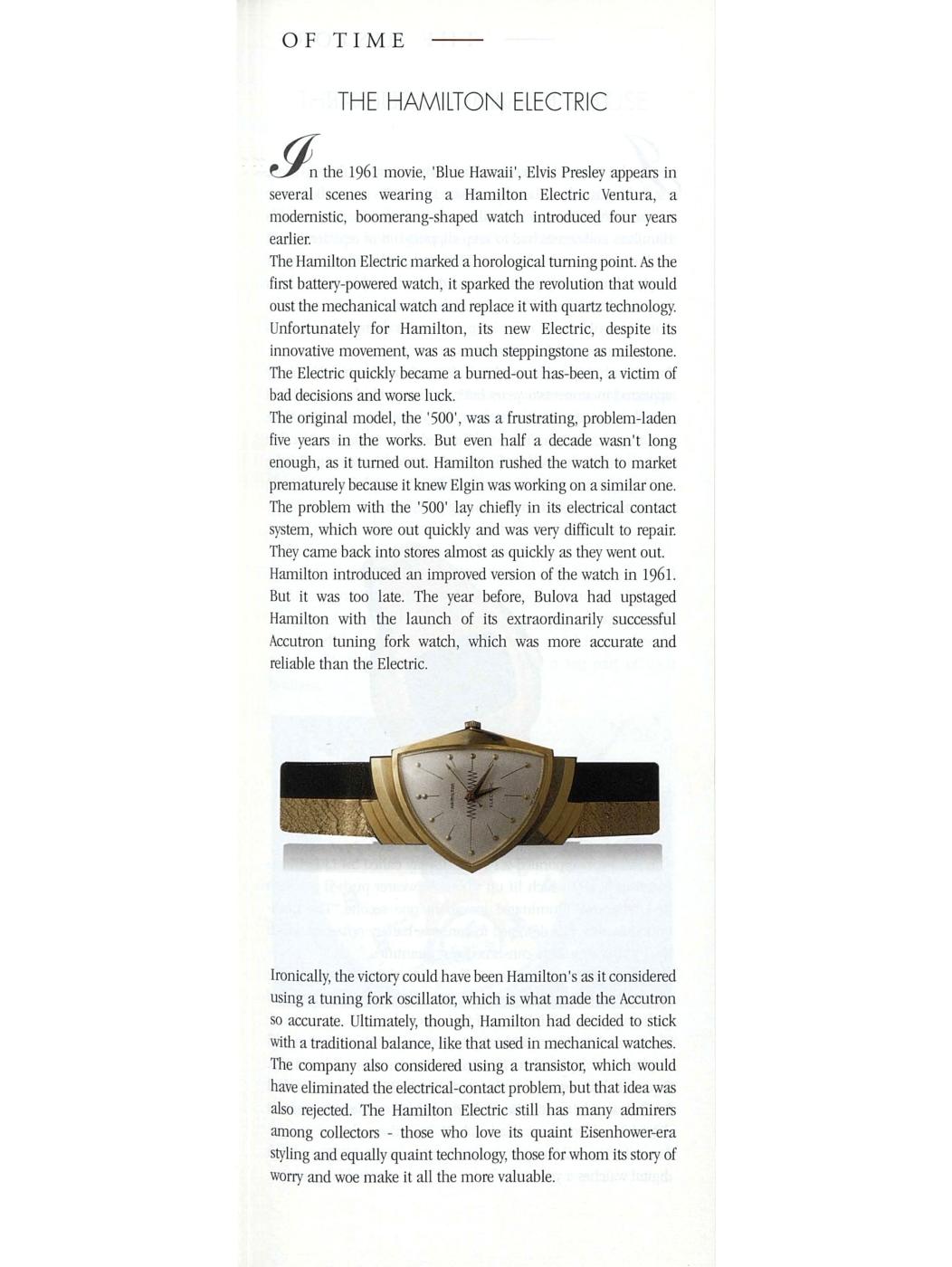 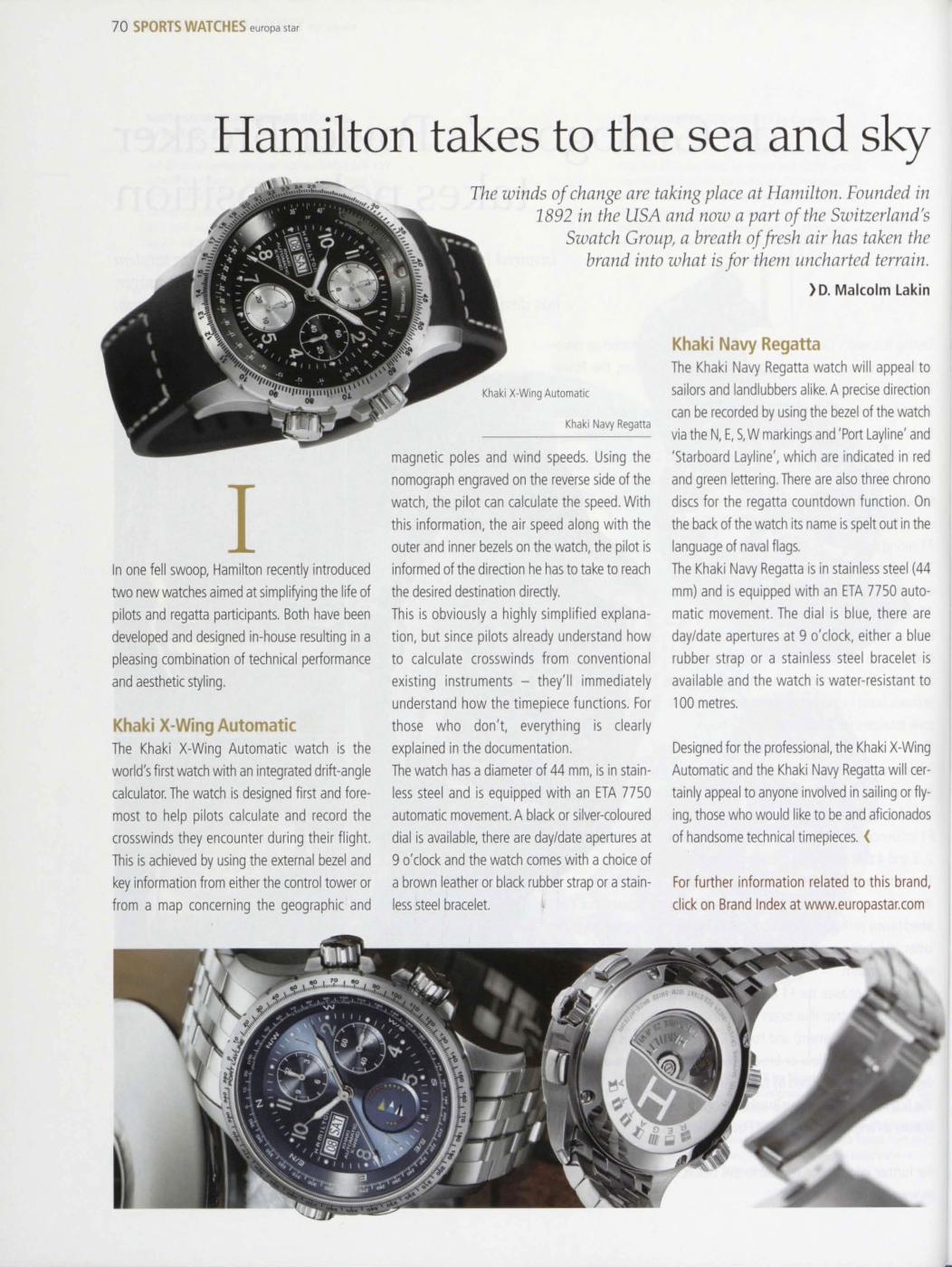 In 2014, the futuristic blockbuster Interstellar hit movie theaters, captivating audiences with its special effects, intriguing plot and the love story between a father and his daughter. The Khaki Field Murph is one of the main emotional links between the two main characters.

‘The Murph’ is the affectionate name given by fans of the movie to the Hamilton watch that stars in the film and is integral to the plot. No other movie appearance epitomizes the importance of Hamilton’s Hollywood collaboration quite like ‘the Murph’ in Interstellar. 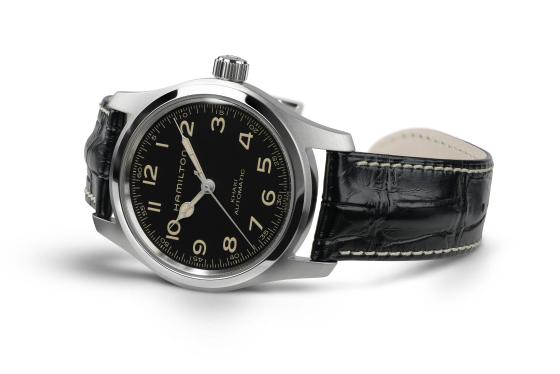 In the film, the existence of humanity is under threat and a team from NASA uses interstellar travel to try to find a new planet. Cooper, a former NASA pilot, joins the mission which means leaving his daughter, Murph. Cooper gives Murph his watch. From inside the ‘tesseract’ of the fifth dimension Cooper sends a message using Morse code through the seconds hand of Murph’s watch. It is the quantum data that will help humanity escape dying Earth. When she works out the formula, Murph shouts ‘Eureka!’ to mark her discovery. Humanity is saved.

It was clear that fans of the movie wanted an opportunity to own a piece of cinema history that means something to them. Now that Hamilton is celebrating our cinema year, we’ve made the Khaki Field Murph.

Discover more on the history of the watch by clicking here.

The only difference is one that is sure to appeal to fans of the movie. The word ‘Eureka’ is printed in lacquer in Morse code on the seconds hand. If you didn’t know it was there, you’d never see it: it is barely visible to the naked eye. For those in on the secret, it’s clear to see and will have special significance for Interstellar fans.

The links to the movie don’t end there. In close collaboration with the film’s award-winning production designer, Nathan Crowley, we developed a special box which is an inspiration of the famous tesseract from the film. The Khaki Field Murph itself is not limited, but the special packaging is. Just 2,555 have been produced. The colored stripes recall the inside of the supercube where Cooper is when he discovers he can communicate with Murph through time and space.

Our defining movie moment is now a defining moment for the movie’s fans who can finally own ‘the Murph’ – a piece of movie history. 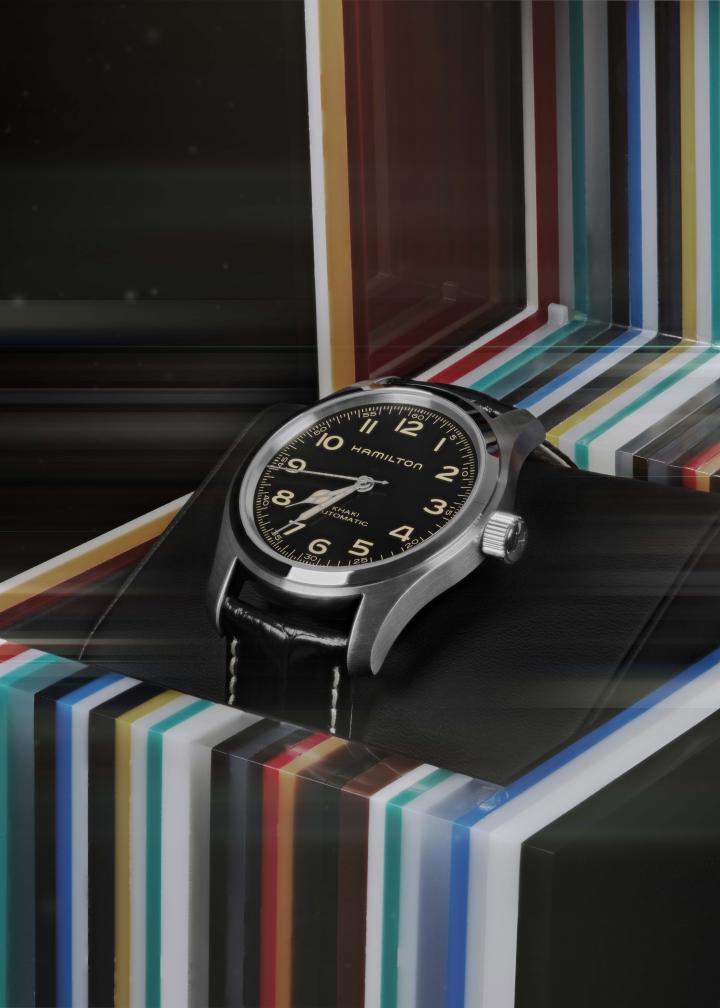