THE NEW FACE OF AN INDEPENDENT HOUSE


With the Flying Grand Regulator Open Gear ReSec, a limited edition of 50 units worldwide, Chronoswiss presents for the first time a regulator timepiece in a striking 44mm case with an automatic movement, available in five different versions.

THE NEW FACE OF AN INDEPENDENT HOUSE

With the Flying Grand Regulator Open Gear ReSec, a limited edition of 50 units worldwide, Chronoswiss presents for the first time a regulator timepiece in a striking 44mm case with an automatic movement, available in five different versions.
T

he C.301 is an exceptional automatic calibre developed by Chronoswiss and the refined Open Gear construction makes the regulator mechanism a prominent design element. It is placed in the spotlight on the face of the dial, where the gear train bridges governing the off-centre hour display have been skilfully skeletonised and screwed firmly to the dial, which in turn becomes part of the movement. The retrograde seconds hand that gives the watch its name sweeps along the tracks of a 120 degree scale and every 30 seconds jumps back instantaneously to the start. 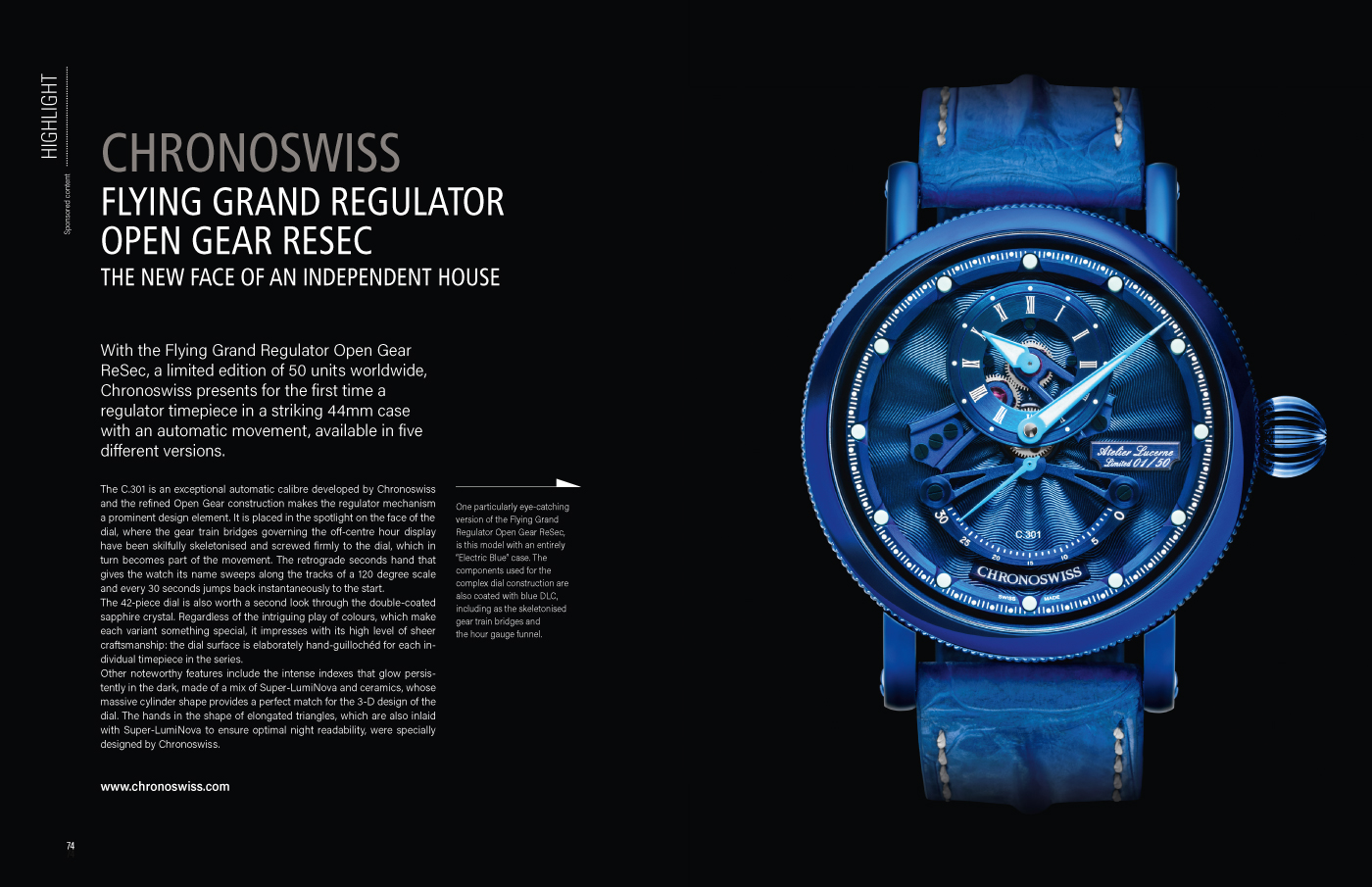 The 42-piece dial is also worth a second look through the double-coated sapphire crystal. Regardless of the intriguing play of colours, which make each variant something special, it impresses with its high level of sheer craftsmanship: the dial surface is elaborately hand-guillochéd for each individual timepiece in the series.

One particularly eye-catching version of the Flying Grand Regulator Open Gear ReSec, is this model with an entirely “Electric Blue” case. The components used for the complex dial construction are also coated with blue DLC, including as the skeletonised gear train bridges and the hour gauge funnel.

Other noteworthy features include the intense indexes that glow persistently in the dark, made of a mix of Super-LumiNova and ceramics, whose massive cylinder shape provides a perfect match for the 3-D design of the dial. The hands in the shape of elongated triangles, which are also inlaid with Super-LumiNova to ensure optimal night readability, were specially designed by Chronoswiss.