Czapek & Cie unveils a special model and starts a new chapter in its remarkable history. The Antarctique combines sophisticated style with an unprecedented in-house power movement pushing the boundaries of the popular sport-chic territory further.

Czapek & Cie unveils a special model and starts a new chapter in its remarkable history. The Antarctique combines sophisticated style with an unprecedented in-house power movement pushing the boundaries of the popular sport-chic territory further.
T

here’s more to haute horlogerie than virtuosic complications. Movement design, rare and fine finishing, select materials or intricate case surfaces, and attention to detail, are all key factors that increase a timepiece’s value in the eyes of the beholder. They are also at the heart of Czapek’s latest model, the Antarctique, says CEO Xavier de Roquemaurel. "The message from our friends and shareholders was clear: To make a watch that exudes a feeling of preciousness, but could also be worn and admired every day...even at the end of the Earth”.

The Antarctique is a 40.5-millimeter three-hander, thin enough to slip comfortably under a cuff, and with a carefully-honed, edgy look. The transparent case back reveals the model’s beating heart, the powerful, 30-millimeter SXH5.01 automatic caliber, conceived exclusively by Czapek’s concepteur, Daniel Martinez. Special attention was given to both performance and appearance, so the movement’s parts are arranged for visual harmony and transparency. 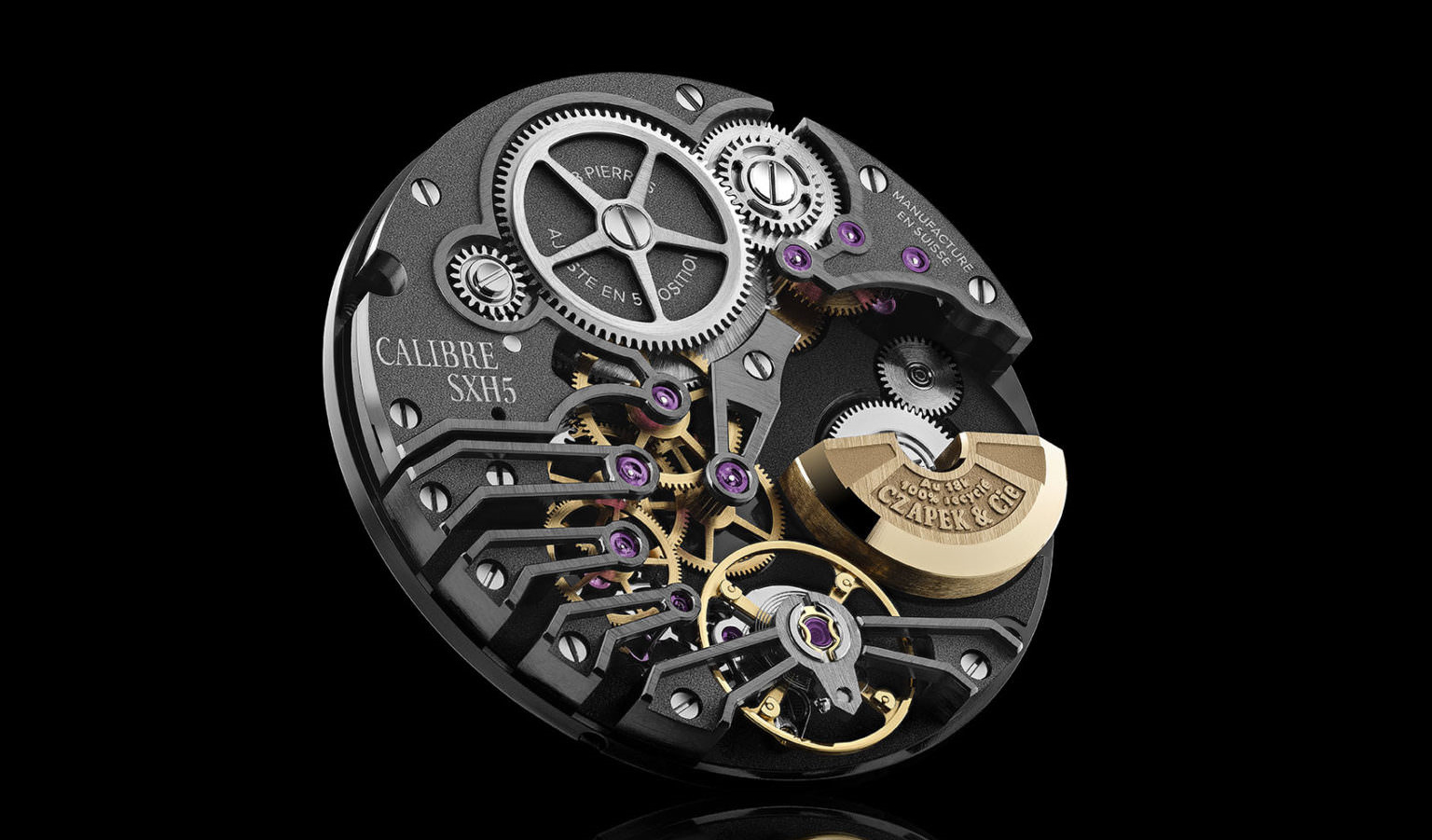 The architecture of the movement is also exceptional. At the root is a free-sprung balance wheel with variable inertia provided by four gold masselotte weights, which enables the highest level of precision tuning for a mechanical watch. The micro-rotor was manufactured in La-Chaux-de-Fonds out of a very special ‘fully recycled’ 18-kt gold supplied by AGOSI. It was placed off-centre to allow a plunging view into the mechanism. The SXH5.01 runs at a fast 28,800 vph. The single barrel harbours a flat spring wound via the traditional Czapek ratchet wheel with five arms. The timepiece has a power reserve of at least fifty-six hours, a truly remarkable feat for a micro-rotor. Waterresistance to 120 meters makes it a natural for the sportive types who would like to keep their watch on while swimming. 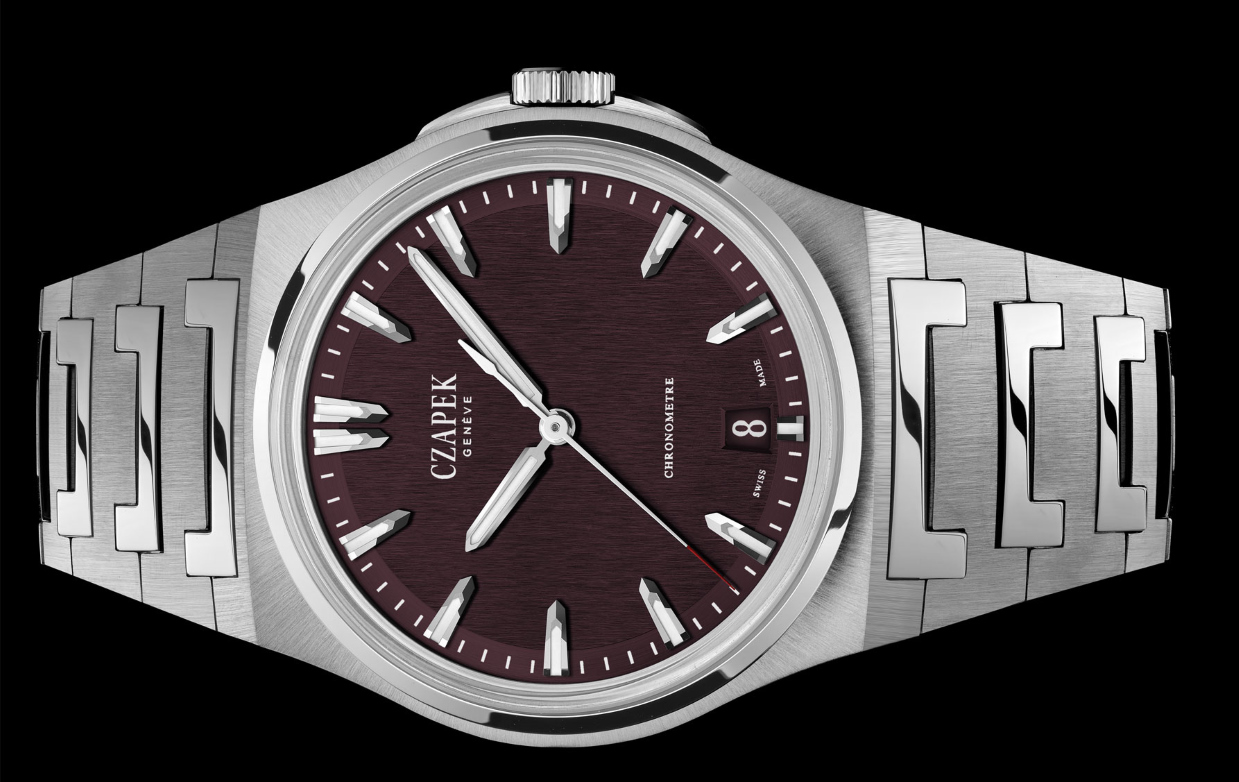 Every part of the Antarctique has been made with a level of care to detail close to obsession. For instance, the gear train is held in place by a series of seven handsome skeletonized bridges inspired by nineteenth-century pocket watches.

Their unique shape, which has been added to the Swiss design register, does recall the Czapek Faubourg de Cracovie chronograph rotor. It proves that stringent watchmaking craftsmanship can be further enhanced with a hint of free-floating creativity, as if form were an equal party to function. The straight-grained sides and the six chamfered inward angles are other hallmarks of a high-end timepiece.

The most visible part of any watch is the dial. The Antarctique’s dial was designed and manufactured by Metalem, a Czapek & Cie cooperation partner, using a unique lamé technique, invented by them 30 years ago and revamped today for this project. This technique consists in creating a series of traits on the dial with a comb. These characteristic striations give the colours more depth and starker reflections. Edgy threedimensional indexes are applied on this handcrafted pattern as if they were bridges over the ocean. On the dial, the date window is positioned at 6 o’clock to maintain the Czapek aesthetics based on vertical symmetry.

The hands design is reminiscent of a sword, sporty and easy-to-read, as well as the indexes. The 40.5mm stainless steel case is integrated with an original double ‘trompe l’oeil’ curve, another unconventional design choice making this timepiece unique and exclusive. It is rounded off by an ergonomic brushed integrated bracelet, whose links mesh to form a highly polished “C” for Czapek. 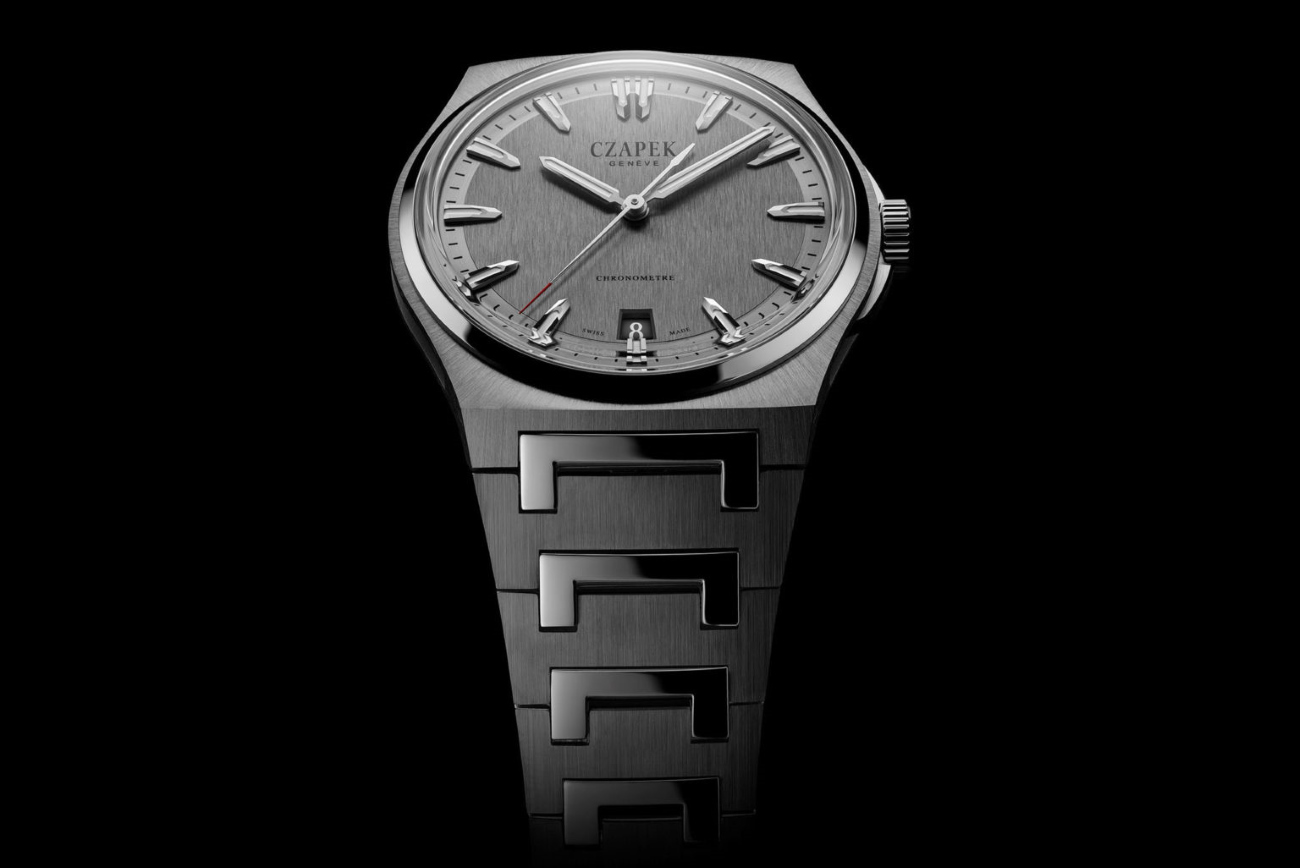 A great deal of attention was put on the bracelet, its feeling when placed on the wrist, comfort, lightness and its capability to be forgotten by its wearer and suddenly reveal its stunning beauty creating an intense pleasure. As Czapek has developed an exclusive quick-change system, an additional strap is provided. Customer can choose between a soft and elegant calf bracelet or a sportier-looking rubber strap.

"This watch, whatever the colour, is a thrill for both the newcomer and the horological expert," says de Roquemaurel. "The neophyte will instinctively fall in love with the dial and the remarkable movement inside, while the expert can use the watch almost as an exhibition piece to explain how a movement works and what makes haute horlogerie so unique." 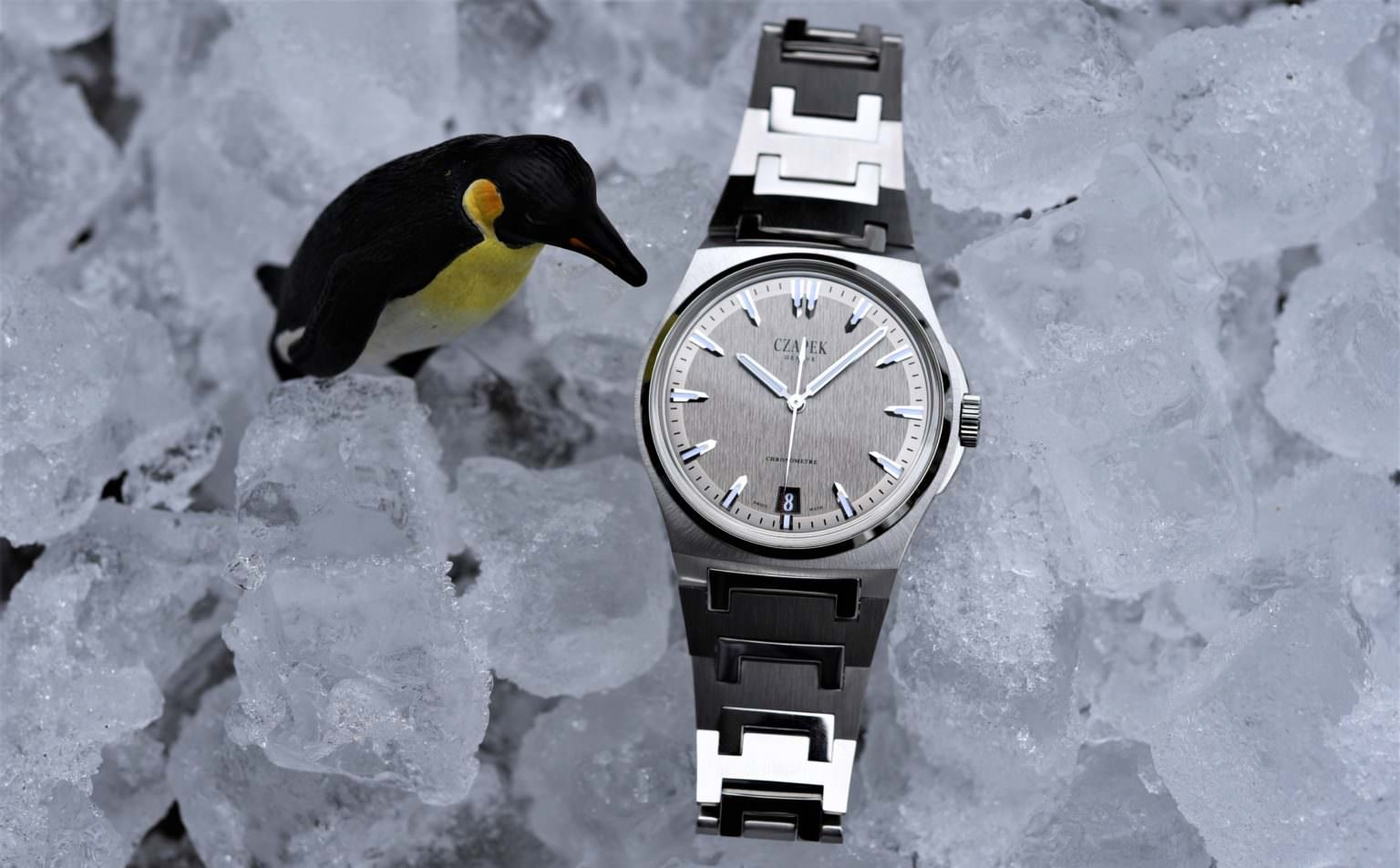 It’s all in the name

The idea of the name was originated by the family trip to Antarctica of one of Czapek’s most historical and active shareholders, a successful entrepreneur who ardently finances new businesses mostly for sustainable solutions.

The name Antarctica raises a host of associations, from intrepid explorers who risked life and limb to discover the world’s remotest parts, to the sheer breath-taking beauty Nature at its most pristine. Indeed, the Sixth Continent has become a preeminent symbol of environmental deterioration and the need for humans to step up their efforts to preserve the planet. "The name resonated, because it also represents our commitment to doing our part,” explains Xavier de Roquemaurel. "It’s not only in the use of recycled gold for the rotor. It’s about safeguarding other irreplaceable assets as well, like the many Swiss artisans dedicated to the traditional watchmaking art. This perfectly illustrates our motto, ’We Collect Rare People’."

The Antarctique is available in several versions. The Terre Adélie will be made in a limited edition of 99 pieces. It is a tribute to the French explorer Jules Dumont d’Urville who named an Antarctica island after his wife, Adèle, during his daring expedition to the continent in 1840. It comes in four colours, Deep Blue, Secret Alloy, Black Ink and Burgundy. The Orion Nebula, a special edition with hand-varnished dial, will be produced in 10 pieces only. Further versions, as well as a new ladies’ model, are scheduled for fall 2020. 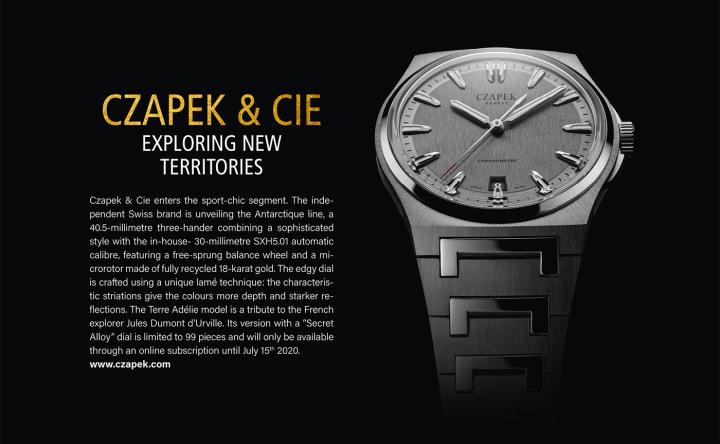