The venerable manufacture has joined forces with the retail giant to unveil an exceptional and ultra-limited model, a perfect marriage of watchmaking expertise and Bucherer’s BLUE prism.

The venerable manufacture has joined forces with the retail giant to unveil an exceptional and ultra-limited model, a perfect marriage of watchmaking expertise and Bucherer’s BLUE prism.
L

aunched in 2016, the Bucherer Blue collection is an appealing partnership between the world’s leading watch retailer and manufacturers. Each edition offering a variation of its emblematic royal blue colour in exclusive models, Bucherer Blue has become a reference for all discerning collectors.

The latest collaborative model with Girard-Perregaux, an exclusive iteration of the Neo Bridges family, gives a first visual impression of absolute lightness in a round, transparent sapphire case enhanced by its brushed titanium side. This impression is immediately confirmed when worn, despite its size of 44mm: the exceptional timepiece rests delicately on the wrist thanks to the ergonomics of its plunging lugs and seems to “float” due its light weight.

It is then the unique architecture of the model that reveals itself, with its double linearity. The vertical gear train running from the barrel at 12 o’clock to the flying tourbillon at 6 o’clock is fascinating, as it seems to levitate under the horizontal axis determined by the iconic three floating bridges enveloping the calibre. The design is graphic and modern. The unique blue of the ADL-treated titanium bridges further accentuates this ethereal feel and the elegance of the piece. 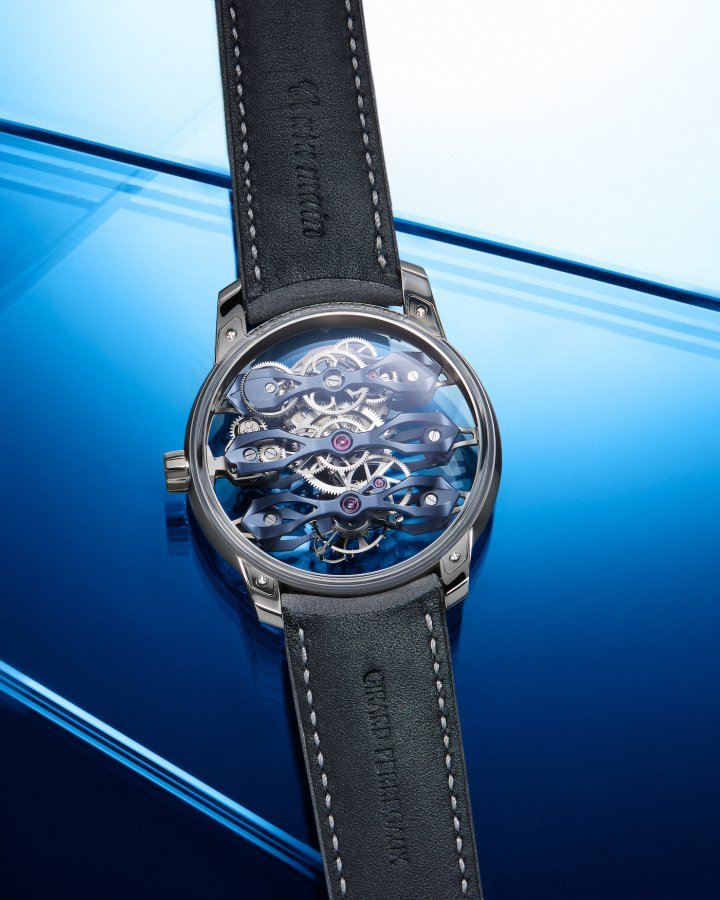 A limited series of 18 pieces, the Tourbillon with Three Flying Bridges Bucherer Blue celebrates the virtuosity of Girard-Perregaux through the prism of “BLUE”. The brand’s iconic movement is considered the oldest watch calibre still in production. The timepiece offers a modern interpretation of this fine watchmaking tradition.

This fine timepiece is powered by a micro-rotor automatic calibre with a single barrel that delivers a comfortable 60-hour power reserve. The white gold micro-rotor is cleverly hidden under the barrel to provide the clearest possible view. The indexes – also in titanium – appear as if suspended on the titanium ring that borders the side of the transparent case. They are coated with white Super-LumiNova in blue tones that blend perfectly with the colour of the bridges. The sword-shaped hands are hollowed out and then filled with blue SuperLuminova for optimum legibility. 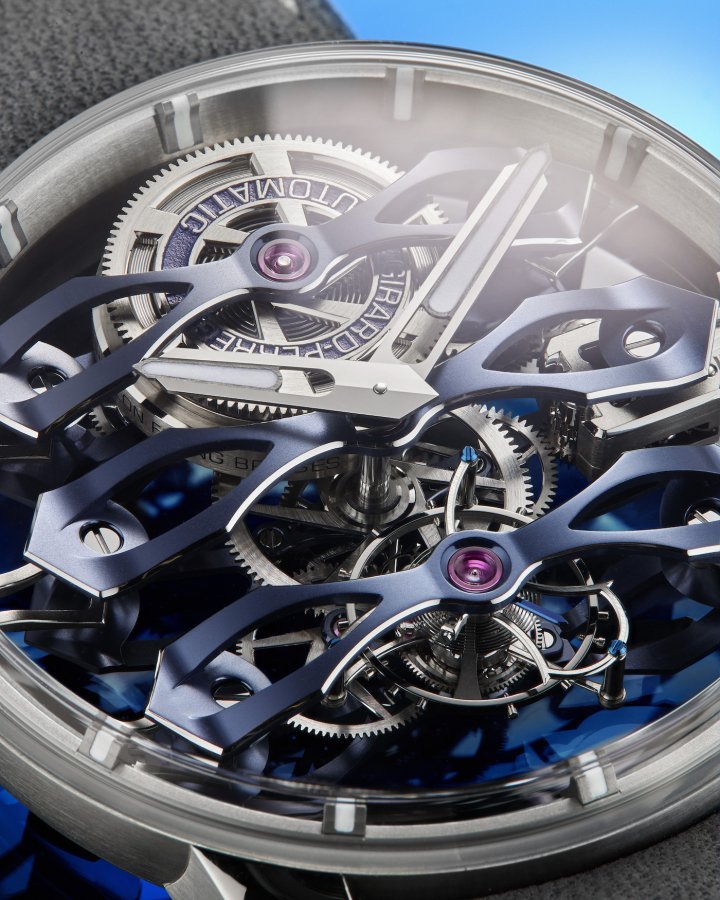 The satin finish of the flanks of the ring under the case and the lugs contrasts with the mirror-polished front and back of the latter. A hand-sewn storm grey calfskin strap with light grey stitching completes this exceptional timepiece. 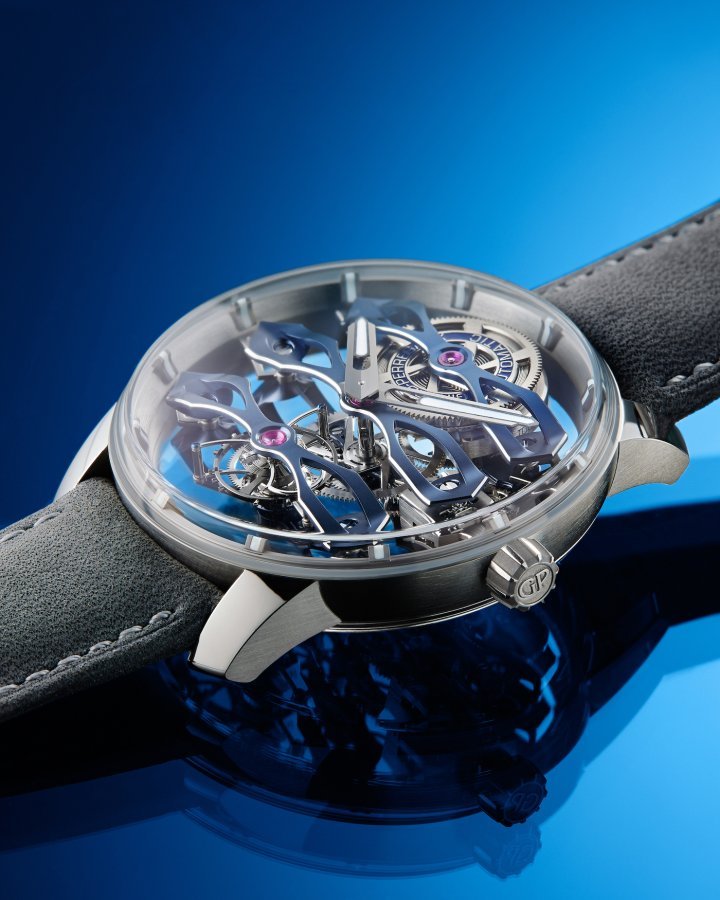 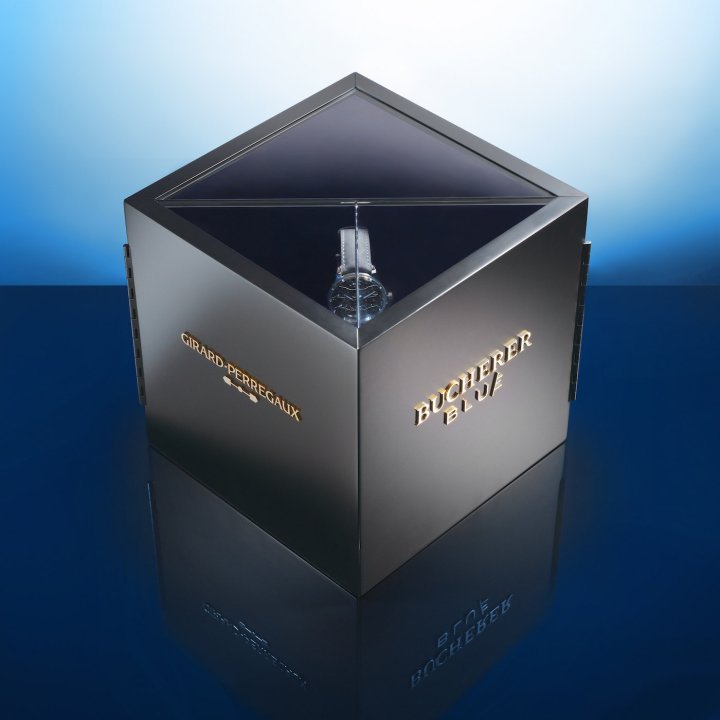