Patek Philippe,...the ‘devil is in the details’


How do we recognize one of the world’s watchmaking ‘greats’ı By its ultra-complicated piecesı By its degree of integrationı By the number of crafts and skills that it has masteredı By the potential for perfection and optimization on a microscopic levelı Yes to all, of course... Reshaping a tiny tooth on a gear wheel is perhaps not the most ‘glamorous’ of operations, but it is this type of detail that sets apart those belonging to the category of ‘haute horlogerie’ from the others.

Patek Philippe,...the ‘devil is in the details’

How do we recognize one of the world’s watchmaking ‘greats’ı By its ultra-complicated piecesı By its degree of integrationı By the number of crafts and skills that it has masteredı By the potential for perfection and optimization on a microscopic levelı Yes to all, of course... Reshaping a tiny tooth on a gear wheel is perhaps not the most ‘glamorous’ of operations, but it is this type of detail that sets apart those belonging to the category of ‘haute horlogerie’ from the others.

Over the last few years, we have become accustomed to the annual launches of exceptional new products from Patek Philippe. Remember the Star Caliber 2000, the ‘Sky Moon Tourbillon’ in 2002 or the ‘Ten Day Tourbillon’ in 2003ı All three are very complicated pieces. Parallel to these accomplishments, Patek Philippe has always endeavoured to create pieces that the brand classifies as ‘useful complications’.
Although perhaps less spectacular, the research and development in this domain nonetheless provides an excellent base for much more extravagant ventures. It also testifies to the potential for innovative advances - often very small advances - that are still possible in traditional mechanical watchmaking. “The devil,” as the saying goes, “is in the detail.”
This year, Patek Philippe is presenting an apparently discreet development, which is not only completely new, but which heralds the development of a new family of calibres. This adds to the current 21 basic house calibres (of which 6 - 7 are pocket watch calibres) and the 35 movements for wristwatches.
The calibre 324/205 is a new automatic movement (4 Hertz, 28,800 vibrations per hour) that was created based on a complete remodelling of an earlier automatic calibre. The goal of this re-make is to offer better amplitude stability and greater working precision. To this end, the gear train has been recalculated in order to minimize gearing effects. But, in increasing the frequency, the power reserve decreases. So, the oscillating weight has been resized, enlarged and made thicker in order to produce more energy.
The Gyromax balance (a Patek Philippe patent from 1948 and 1951) has been entirely redesigned. The two arms and eight movable inertia-blocks have been replaced by four arms with four regulating inertia-blocks integrated aerodynamically. With the same objective of optimizing the constant of energy distributed, a new shape of the gear teeth has been developed. All the pivots of the gear train axes have been revisited in order to avoid all wear and tear. Many other details, all contributing to the reliability and life span of the movement, have been reassessed. The minute-hand bar has been constructed in two parts, the date gear train is asymmetrical and the thickness of the winding gear train has been strengthened.
This new calibre needed a packaging worthy of the name, as well as a function that is capable of testifying to its performance. So, a new face has been given to this new heart: the new Annual Calendar with lunar phases, reference 5135.
We all remember that in 1996, Patek Philippe launched, under an exclusive patent, the first wristwatch equipped with an automatic display of the month, day, and date, which only required one manual correction, the first of March each year. RRR
With a new and very attractive tonneau case, the current Annual Calendar includes an important innovation, from a technical point of view as well as for immediate readability. For the first time, the indication of the date, day and month are given in three different windows, located in an arc between 10 o’clock and 12 o’clock. An auxiliary dial, situated at 6 o’clock displays the 24 hours and the lunar phases.
A new demonstration of ‘useful functions’, the Annual Calendar seems very simple in appearance but this uncomplicated exterior conceals a highly technically sophisticated movement that is clearly destined to become a classic for the Geneva brand. Everything supports this.
Beyond the technical aspects described above, the special elegance of the case, which combines a tonneau form elongated by boldly designed horns with a cushion-type bezel, is reminiscent of the Art Déco period. The case is available in yellow or white gold and comes with a screw-in sapphire caseback, ensuring water-resistance to 25 metres.
Silvered opaline on yellow gold, silvered grey or slate grey on white gold, this contrasting treatment makes the dials seem like they are composed of two shimmering colours.
The lunar phase complication is unbeatably precise. According to Patek Philippe’s engineers, 122 days must pass before this mechanism is off by only one day.
It is precisely in this kind of detail that we find the ‘devil’ of Patek Philippe. 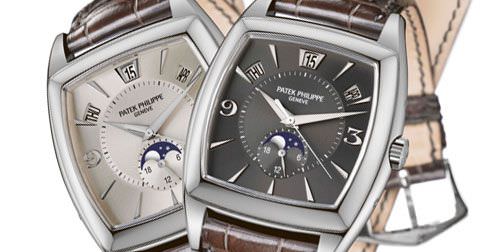