The ‘art watches’ by Patek Philippe


Collectors are already gleefully rubbing their hands together. Patek Philippe is introducing this year a new ‘World Time’ watch with an enamel dial, which makes its return appearance to the Geneva company’s current collection. If enamel is the order of the day, with a series of limited thematic timepieces and a magnificent DÔme table clock, the art of transparency is also being promoted with the brand’s new and brilliantly crafted Skeleton Watch.

The ‘art watches’ by Patek Philippe

Collectors are already gleefully rubbing their hands together. Patek Philippe is introducing this year a new ‘World Time’ watch with an enamel dial, which makes its return appearance to the Geneva company’s current collection. If enamel is the order of the day, with a series of limited thematic timepieces and a magnificent DÔme table clock, the art of transparency is also being promoted with the brand’s new and brilliantly crafted Skeleton Watch.

The price was 6,603,500 Swiss francs! This trifling sum holds the absolute record, and was paid at auction in 2002 for a platinum Patek Philippe World Time watch made in 1939. Other rare models of this exclusive complication, particularly from the 1940s and 1950s, regularly fetch prices of around a million Swiss francs or so at auction. Results like these make this wristwatch probably the most highly quoted timepiece in the world.
Among all of Patek Philippe’s World Time models, the ones with a hand-painted cloisonnÉ miniature in the centre of the dial are es-pecially in demand. Over the years, the enamel motifs have varied: a group of palm trees, solitary lighthouses, etc. But undeniably the most popular is the stylized map of the world. Quite understandably, since this design corresponds so closely to the vocation of the watch. 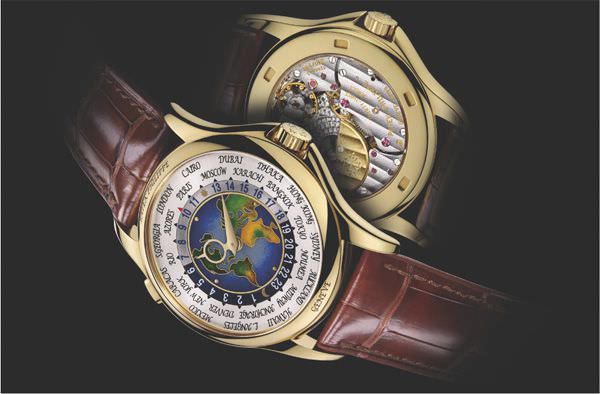 
A mechanism designed in the early 1930s
It was the very talented—and modest—Geneva watchmaker, Louis Cottier, who developed the first mechanism to measure world time. His timing could not have been better since luxury watches were no longer in fashion after the 1929 economic crisis. Working for himself, Cottier drew inspiration from the first air flights and by international telecommuni-cations to design a watch that could indicate the world’s different time zones. He used a bezel that rotated around a dial, on which were engraved the names of the planet’s principal capital cities. Cottier then approached Patek Philippe with his invention, and the Geneva brand patented it in 1959.
In 1999, Patek Philippe developed a new patented mechanism, which optimized the Calibre 240 HU (HU stands for Heure Universelle) by disconnecting the world time mechanism, composed of discs of the cities and the 24 hours, from the gear train of the watch. The precision of the calibre and the movement of the minute hand therefore were no longer affected by changing from one time zone to another. So, how does the World Time watch work?

A useful complication
The watchmaking genius of Louis Cottier’s invention resides essentially in the great simplicity of use. Not only is the World Time complication of great utility—what could be more relevant these days than to know the time in some other part of the world—but it is also easy to use.
The local time, indicated by the hour hand, and the minutes always refer to the location that, on the cities disc, is aligned with the hour marker at 12 o’clock. Setting the time is carried out using a crown that works in conjunction with the 24-hour disc. Since the scale is over 24 hours, there can thus be no confusion as to whether it is day or night, for example, whether it is 7 a.m. or 7 p.m. As a plus, however, the day and night are also differentiated by a colour and by a symbol (sun or moon).
Changing from one time zone to another, thus passing from one hour to another, is achieved very easily by activating a pushbutton at 10 o’clock. With each press on the pushbutton, the hour hand advances one notch, while the city disc and the 24-hour disc move back one time zone. By pressing the pushbutton 24 times, the watch makes a complete cycle and returns to the starting point.
The calibre 240 HU is an automatic movement oscillating at 21,600 vibrations per hour. It features a Gyromax balance and a flat balance spring. Its 22 carat gold unidirectional mini-rotor is completely integrated into the plate. The timepiece has, of course, earned the distinguished PoinÇon de GenÈve or Geneva Seal.

The TIGERS and the MASKS OF VENICE Collections

Enamel’s incomparable refinement and durability
The new World Time model, reference 5131, features an 18 carat yellow gold case and dial, whose centre is decorated with a world map in handcrafted cloisonnÉ enamel.
Since its origins at the end of the 15th century, enamelling has been a decorative art of incomparable refinement. Enamel is a transparent and colourless material that, after being placed on a metal plate and heated to a high temperature (850 to 900 degrees Celsius), vitrifies and becomes permanent and stable. The enamel’s colours, obtained by adding different metallic oxides to glass powder and then deposited on a surface using a goose feather or a paintbrush, have exceptional sparkle and brilliance. Contrary to paint composed of conventional pigments, enamel never tarnishes and will conserve all its lustre for centuries.
Among the various techniques employed in enamelling, the one used for the World Time dials is cloisonnÉ. Using gold wires or strips that are a little thinner than a hair, the enameller draws the outline of the design, creating small cells (cloisons, in French) into which the enamel is deposited, layer after layer. Several passages in the oven are necessary since the metallic oxides change colour depending on the temperature. The enameller will thus not know if his work is a success or a failure until the end of a long process. The piece comes out of the oven red hot and then blackens slightly as it cools before finally the miracle of the colours is revealed. The wires are then flattened to the height of the enamel layers and the entire piece receives a last protective and totally clear layer called fondant.

The BIRDS OF PARADISE Collection

Thematic collections
This fine and precious art, which up to the beginning of the 20th century contributed greatly to the reputation of Geneva, has nearly disappeared. But Patek Philippe, along with a few other brands, has never stopped practicing and promoting this technique. Among today’s examples—besides the superb World Time watches—is a limited series of timekeepers with cloisonnÉ enamel and engraved dials that are available in three themes: Tigers, Birds of Paradise, and Masks of Venice. Five sets of the three themes will be produced, with each theme comprising four watches, all with different dials.
The Tigers, featuring cloisonnÉ enamel, engraving under the enamel, and miniature painting, will decorate the dial of a platinum watch, powered by a manual-winding Calibre 215 movement. A set of the same watch in platinum, available in the Masks of Venice theme, also features cloisonnÉ enamel, engraving under the enamel, and miniature painting, as well as strips of gold.
The watches in the Birds of Paradise theme are available in a new round case, equipped with the extra-flat automatic winding Calibre 240 and a dial with cloisonnÉ enamel and engraving under the enamel.
Another demonstration of the brilliance of the art of enamelling at Patek Philippe is the table clock, the DÔme. This unique timekeeper is composed of three partitions, a cupola, and four appliquÉs on the dial, which are made in opaque and translucent enamel. These different elements are separated by small gold dividers. It should be noted that the enamelling and firing processes of the rounded pieces are particularly tricky and rare are the artists who succeed. More than 20 metres of gold wire is used to make the partitions that outline the rich motifs in the decoration of these clocks.


Another art, that of transparency
Another art that serves to refine watchmaking is that of transparency. If enamelling is an art that embellishes the exterior of a watch, the skeleton process tends to make the heart of a watch—its movement—into a decorative work of art. This is a delicate and ancient technique that cuts out the plates, bridges, and body of the watch to the furthest extent possible.
The perilous equilibrium of this art of metallic ‘lace making’ is perfectly illustrated by the work accomplished on the extra-flat movement, the Calibre 240, of the Calatrava Reference 5180/1, sculpted and cut out to the maximum limits permitted by the metal.
The piece’s 39mm white gold case has been reduced to the bare minimum. It consists of no more than a simple narrow band. All around on the inside is a circular casing in cut-out gold that has been reduced to 12 pieces of metal serving as the hour markers. On the outside, a blue-tinted bezel borders the domed sapphire crystal, while the back of the watch is protected by another sapphire crystal.
At the centre of the piece is the architectural mechanical lace of the movement. It took a great many hours for the artisans to cut out the balance cock, the barrel bridge, the plate, the two faces of the barrel, as well as numerous other parts, before delicately engraving them and then polishing their bevelled edges. 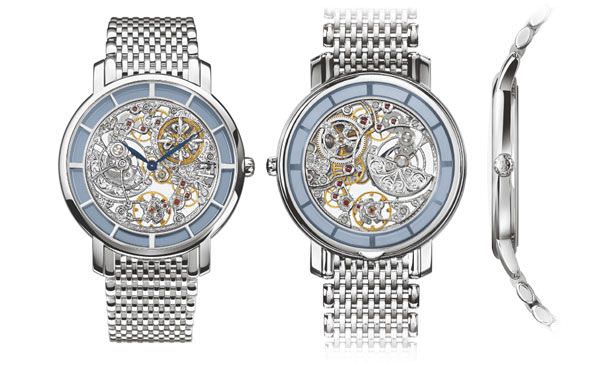 
The suspension point of the rotor is also cut out, to the point that there is hardly anything left. The compact rhodium-plated gold rotor that oscillates below this point is engraved with arabesques on its two sides. The entire movement is reduced to a brilliant skeleton. In this filigree decoration, the circular opening in the plate, which lets the barrel be seen, is hand-engraved with the name of Patek Philippe on its perimeter and decorated with a hand-sculpted Calatrava cross.
Patek Philippe warns any ‘aspiring owners’ of this splendid timekeeper that they must be patient. The time necessary to create these micro mechanical sculptures means that only a few watches can be made each year. And, since the hand is the only master, each piece will have slight differences compared to the others, and thus will be unique. Now who is going to complain about that?