The fruitful cooperation between Jaeger-LeCoultre and Aston Martin has successively given rise to the AMVOX1 Alarm, an extremely beautiful alarm watch, and to the AMVOX2, an exceptional chronograph, unique in its kind and vertically activated by simply pressing the watch glass. Now comes the AMVOX3 Tourbillon GMT, which showcases a watchmaking complication, the tourbillon, within a technical, sporting, and prestigious stage setting. Above and beyond this spectacular new mechanism, the AMVOX3 is also a watershed model representing Jaeger-LeCoultre’s first incursion into the world of high-tech ceramics.

The fruitful cooperation between Jaeger-LeCoultre and Aston Martin has successively given rise to the AMVOX1 Alarm, an extremely beautiful alarm watch, and to the AMVOX2, an exceptional chronograph, unique in its kind and vertically activated by simply pressing the watch glass. Now comes the AMVOX3 Tourbillon GMT, which showcases a watchmaking complication, the tourbillon, within a technical, sporting, and prestigious stage setting. Above and beyond this spectacular new mechanism, the AMVOX3 is also a watershed model representing Jaeger-LeCoultre’s first incursion into the world of high-tech ceramics.

Before taking a closer look at this new watch, let’s go back to the beginning of this adventure between these two companies, which, beyond their differences, share many ‘values’ as well as the same demanding spirit. Their paths crossed for the first time in the 1920s. Watchmaking was in a crisis and Edmond Jaeger decided to diversify into other areas. His company thus began producing precision instruments for the automobile industry. This gave birth to the famous Jaeger counters that would soon equip the most prestigious cars of that era as well the majority of racing cars. One of these cars was, of course, Aston Martin.


Watch and automobile icons
Closer to the present day, Aston Martin Racing announced in 2005 its grand return to car racing, most notably its participation in the legendary Le Mans 24 Hours race. Its DBR9—which would soon become an icon—was a competition version of the ‘civilian’ DB9 derived from the DBR1 that won not only the Le Mans 24 Hours, but also the world racing car championship. This event sealed the new partnership between Jaeger-LeCoultre and Aston Martin, and resulted in the introduction of two watches, the AMVOX1 Alarm, following close on the heels of the AMVOX1 R-Alarm.
The AMVOX1 Alarm celebrated the 40th anniversary of two icons created in 1963—the legendary Memovox Polaris watch and the Aston DB5. The DB5 later also found fame as the ‘James Bond car’.
This first watch, featuring an automatic Jaeger-LeCoultre 918 Calibre, suspended bell chime, and a titanium or steel case, took on the 270° disposition of the old Jaeger counters. This reinterpretation was discreet, elegant, distinguished, and paid homage to the mechanical and aesthetic purity of the Aston Martin automobiles. As a small additional touch, the strap’s leather ‘Bridge of Weir’ is identical to the leather in the latest Aston Martin models.

The following model, the AMVOX1 R-Alarm, is produced in platinum or titanium. While it follows the same line as the previous timepiece, it takes on a number of the design codes of the sporty DBR9, especially the Aston Martin Racing colours. The guillochÉ pattern of the centre dial also evokes the car’s radiator grill.


The AMVOX2, a truly revolutionary chronograph
In 2006, the two companies strengthened their relationship even more with the release of a revolutionary and truly unique chronograph—the AMVOX2 Chronograph Concept.
The first chronograph without pushbuttons, the AMVOX2 is activated by pressing the upper and lower part of the sapphire crystal, which has a 4° movement and, via a complex system of levers, transmits impulses to trigger the chronograph. “Our aim with this model is to create a performance watch that is as intuitive to use as driving an Aston Martin,” declared JérÔme Lambert, Jaeger-LeCoultre CEO, at the launch of the watch. “The AMVOX2 Chronograph Concept is the ultimate driver’s watch.

Inspired by the start button on the Aston Martin DB9 dashboard, it is a quantum leap in the world of chronographs,” he added. This seemingly simple chronographic system requires the support of high-tech engin-eering and a completely innovative mechanical concept. A unique ball-joint system permits the case and bezel to pivot 4° away from the shoulders of the watch, thus activating levers that instantly transmit impulses to control the chronograph mechanism. Each of the four levers (two at the 12 o‘clock position and two at six o’clock) is mounted on a miniature stainless steel ball bearing, which in turn contains seven balls of 0.1 mm diameter. To ensure that the chronograph is not triggered, disengaged, or reset inadvertently by the wearer, the AMVOX2 has a three-position sliding indicator or cursor on the flank of the case at 9 o’clock that locks the chronograph.
The 25-part dial is filled with all sorts of Aston Martin references: the emblematic dark grey of the sports car brand; the circular satin finish similar to the surface effect of the brake discs; the five markers on the highlight band inspired by the DB9’s dashboard instruments; the refined contrasts of shiny and matt surfaces reminiscent of the co-existence of polished chromes and sand-moulded engine parts.

The chronograph’s timing data is found in two very legible quarter-moon indicators on luminescent dials (a 30-minute counter between 2 and 4 o’clock and a 12-hour counter between 8 and 10 o’clock) that recall the headlights of an Aston Martin car. The date aperture is at 5 o’clock. A dark-hued highlight runs around the dial with a break between 4 and 8 o’clock so that the wearer can appreciate the extraordinary red lever mechanism that controls the chronographic functions: a red tint that is the same as the optional red available for the Aston Martin’s brake callipers.

The AMVOX3 Tourbillon GMT, Jaeger-LeCoultre’s first ceramic watch
The third and most recent timepiece this year to come from the technical-aesthetic symbiosis between Aston Martin and Jaeger-LeCoultre is the AMVOX3 Tourbillon GMT. For the occasion, Jaeger-LeCoultre created its first watch made of ceramic. The brand also introduced a number of innovations in the movement, notably those designed for its famous Extreme LAB. As the world’s first watch not requiring any lubrication, the Extreme LAB is a true example of avant-garde timekeeping. 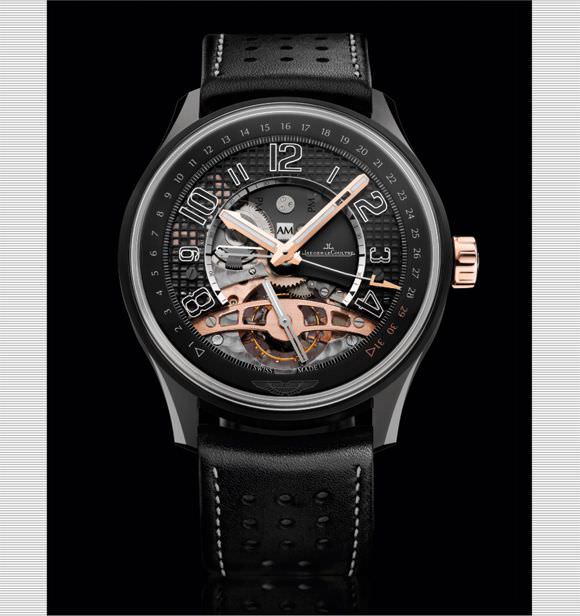 
For its first round ceramic case, Jaeger-LeCoultre opted for a cutting-edge process capable of guaranteeing that the AMVOX3 tourbillon GMT meets the quality standards imposed on an haute horlogerie watch. A mixture of zirconium and yttrium oxides is heated at high pressure to a temperature of over 2,000 degrees Celsius in order to combine the two components into strongly cohesive blocks. To avoid any risk of porosity, the homogeneity of the material is also subjected to radioscopic scrutiny. This process is the only way to guarantee the correct machining of high-end ceramics and to achieve extremely precise contours of the watch. This final stage calls for the use of special tools coated in diamond crystals as well as diamond powders for polishing. The type of ceramic used by Jaeger-LeCoultre therefore features peerless resistance and stability, for a material that is barely harder than titanium, but is lighter and twice as hard as steel (1,500 Vickers compared with 600 Vickers for steel).

This splendid intense matt black case houses an equally high-perform-ance movement, the Jaeger-LeCoultre Calibre 988 with tourbillon regulator. This is the first movement to house one of the major innovations in the revolutionary Master Compressor Extreme LAB presented last year. Its oscillating weight has been radically redesigned both in terms of its geometrical shape and the materials used for its construction. Its segment, made from a platinum-iridium alloy (the densest existing non-toxic physical body, at 12 per cent higher than 24 carat gold) is linked by arms in carbon fibre (known for its lightness and rigidity) to an arbour pivoting on ceramic ball bearings. The overall thickness is thereby reduced by 14 per cent, the weight by 25 per cent and friction is also far lower. This results in improved balance between weight and inertia, as well as enhanced reliability and shock-resistance.
The movement, equipped with a variable-inertia balance (oscillating at 28,800 vibrations per hour) featuring ruthenium-coated bridges and base plate, can be admired through a broad opening in the dial of the AMVOX3. Just below, another opening affords a clear view of the tourbillon with its ruthenium-coated (280g) grade five titanium carriage supported by a gilded aluminium upper bridge. The openwork design of this bridge immediately evokes the supreme automobile sophistication epitomised by Aston Martin. This clever play on openings and the striking contrast between black (for the case, inner bezel ring and numerals), 18 carat pink gold and gilded accents (on the caseback, polished crown and hands) admirably echoes the prestige, the power and the aesthetic coherence of the Aston Martin world. The dial evokes the characteristic structure of an air inlet grid and also displays a patented date display, which jumps instantly from the 31st of one month to the 1st of the next so that the tourbillon is not hidden from view, as well as a dual time zone display equipped with a useful AM/PM indication.

Clearly, the AMVOX3, like the watches before it and like the Aston Martin automobiles, is exclusive and thus only available in a limited series of 300 pieces.