Jean Dunand: “to become the quintessence of the niche brand!”


Jean Dunand: “to become the quintessence of the niche brand!”

In one concise phrase, Thierry Oulevay describes what he wants for Jean Dunand: “to become the quintessence of the niche brand!”
This stated goal is not so obvious. It requires, above all, a strong vision, based essentially on the long term. It also means being able to “stay the course” without “ever deviating from the pre-determined line” or without losing sight of the “guiding light” that presided at its birth. And it involves having strict standards in terms of excellence at all levels, from the design of the product to distribution, passing by the fabrication.


And this goal also demands another essential quality: knowing how to take one's time. In this period of economic crisis where everyone is loudly advocating “a return to fundamental values”—including even those who, during the previous years, impatiently fired their arrows in all directions—this quality seems more than ever a central issue. It alone will allow the patient construction, starting from the basics and proceeding step-by-step, of a true edifice, a true watch “house” worthy of this name.
Thierry Oulevay and Christophe Claret obviously know how to take their time. In 2003, they were reproached by some for having taken more than one year to seal the shareholders agreement that established parity between them at the head of WPW (World Premiere Watchmaking) SA, owner of the Jean Dunand brand. “We took our time to correctly establish this founding agreement, which means that it is the guarantee of a future that has been thought out in detail and considered in all its implications. It is a way, from the very beginning, to show that Jean Dunand has nothing to do with a sudden ‘coup’ but has been deliberately and carefully constructed from the start with an eye to all its future developments.”

Golden Rules
From the beginning, a certain number of golden rules were laid down: Jean Dunand will be “positioned as no other;” Jean Dunand will remain “small;” and Jean Dunand will only offer “exceptional products.”
“Positioned as no other” is certainly the case, since Jean Dunand is the only brand that proposes only unique pieces. No Jean Dunand watch is exactly identical to any another. Each is exclusive in the true sense of the term.
Remaining “small” is a given since Jean Dunand’s production is limited to about 35 to 40 watches a year. During the course of 2009, the brand will sell its 100th watch. Since its creation in 2003, Jean Dunand has only presented two different models— with the exception of six of its Grande Complications. These are the Tourbillon Orbital line as of 2005 and the Shabaka starting in 2008.
“We take, on average, two years to develop and introduce a product. Our next model, which already exists as a prototype, will not come out before the end of 2009 or the beginning of 2010,” explains Oulevay, who is reluctant to say more except than the new watch will be “a very exceptional form watch with chronographic functions inspired by the exploits of metallic construction at the beginning of the 20th century. It will only be presented when it is finished and we are able to deliver it. Having said that, we also have other projects on the drawing board for the next fifteen years to come.”
“Exceptional product” is a classification that certainly applies to Jean Dunand. “In an environment where, for the last few years, new brands were appearing every day, we want to set ourselves apart by only presenting timekeepers that incarnate the summit of contemporary timekeeping,” adds Thierry Oulevay. “And we want to remain always on the straight line of timeless watchmaking. Our pieces are thus more ‘fundamental’ than experimental. This also reflects the rather special profile of our clientele, who are not the same as those individuals who are interested in the most avant-garde types of experiments. Our clientele appreciates the uncommon mechanisms of our watches as much as it does their artisanal craftsmanship and their high level of refinement with their Art DÉco-inspired clean lines.”

High level of craftsmanship
Beyond the mechanical performance that is represented by Christophe Claret’s very complex, original and exclusive movements—which equip, respectively, the Tourbillon Orbital and the Shabaka, Jean Dunand's timekeepers are distinguished by the exceptional quality in their artisanal fabrication.
In particular, the Tourbillon Orbital lends itself wonderfully well to all transfigurations. Impassioned by gemstones and the most unusual materials, Thierry Oulevay takes special care to have the dials cut and prepared in the most surprising ways in order to confer a totally unique character on each watch.
The arts and crafts of enamelling, engraving, miniature painting, and Chinese lacquer are used and together they create miniature works of art. As an example, one of the latest creations by Jean Dunand is the Tourbillon Orbital Chinese Lacquer. Two years of research were required to develop new ways of applying Chinese lacquer to the miniscule surfaces of the dial while respecting the angular geometric zig-zags of the champlevÉ decoration over a gold base. This motif evokes the geometric abstractions popular during the 1920s.
Another brilliant artistic demonstration is the Tourbillon Orbital Confucius. Here, it involves miniature painting on a very fine onyx dial over a gold disc, requiring attention to minute details and great precision. The theme of Confucius was not chosen simply by chance. Not only has the Orient served as one of the great inspirations of the 1920s—which provides inspiration for Jean Dunand—but Chinese philosophy also says: “impatience towards the little things introduces confusion in the grand designs.” This phrase itself sums up the entire philosophy of Jean Dunand.

TOURBILLON ORBITAL CONFUCIUS
Jean Dunand’s mechanical wonder celebrates the enduring Confucian legacy and has entrusted the meticulous work of painting a miniature line portrait on the diminutive onyx surface to the capable hands of one single craftsman— the only artist in Switzerland capable of executing the demanding task. Countless hours of manual labour and fifteen kiln firings have been invested in this miniature.
The first challenge for Jean Dunand’s miniaturist was to reinterpret the original rectangular drawing onto the round surface of the onyx and a grid is used to plot the picture. Using top quality Swiss varnishes, the artisan blends his colour palette before undertaking the artistic odyssey where steady hands, keen eyes, and patience are called upon.
Because of the delicacy and precision required, the artist handcrafts his paintbrushes from marten hair, often employing only a wisp of twenty odd hairs. Working from the face outwards with the aid of a binocular microscope, the artist applies the colours, often repeating a stroke to increase volume that can be appreciated on Confucius’ beard or drawing out the stroke to achieve the nuance and gradation to render the curve of Confucius’ forehead. Each painting session is followed by a stint in a 90 ti 100° C kiln culminating in a final kiln firing of 6 to 7 hours. The final result, a mere 3/100ths of a millimeter thick, is proof positive that complication and ornamentation, exceptional technology and consummate artistry do indeed produce remarkable results.

TOURBILLON ORBITAL CHINESE LACQUER
Art historians agree that China was the birthplace of the art of lacquering following the discovery of a red lacquer wood bowl dating to the Neolithic period in Zhejiang well over 7,000 years ago. Initially used to protect everyday objects from water, acid and alkaline elements, the art of lacquering came into its golden age with the splendid Han Dynasty (202 BC to 220 AD) adorning precious objects for the imperial court and combining coloured lacquer with gold and silver inlays. The Rhus Vernicifera or lacquer tree occurs naturally in China and has been cultivated for millennia for its sap that is collected by tapping the trees and bleeding them at very precise intervals. Traditionally, the precious liquid is sieved through a fine cloth to remove impurities and left to settle, clarify and separate for several months in a dark, damp, cool environment.
The creation of coloured lacquer is a complex process combining powdered vegetable pigments and Tung oil that are notoriously difficult to blend. But the real challenge lies in applying nature’s wonderful gift. Much like working with liquid honey, lacquer has to be applied slowly and great care exerted to avoid leaving trails or traces in each coat. Traditionally, paintbrushes confected from Chinese human hair were employed because marten hair and other animal origin hair were deemed too thick.
The environment has to be impeccably clean because the slightest particle of dust will be embedded for posterity in the lacquer. Using the champlevÉ technique to create a recessed pattern to house the lacquer, troughs or cells are hollowed into the gold base. Once the areas have been clearly demarcated, the lacquer—up to 10 individual coats—is applied layer by layer. Each layer must be perfectly dry before its surface is buffed and smoothed with charcoal and then meticulously polished to acquire its unique lustrous sheen. 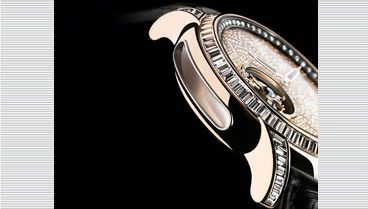 TOURBILLON ORBITAL DIAMOND BAGUETTES
Jean Dunand’s stylized interpretation of a 12-point fir tree is the decorative theme of this watch. This design is inspired by the abstract geometric designs and floral motifs prevalent during the Art Deco period that aimed to transmit the essence of an object in its sleekest, most elegant, and streamlined form. The fir-tree pattern radiates from the dial in concentric circles and is set alight with 428 brilliant-cut icy diamonds. The chapter ring encircling the symbolic fir tree is studded with brilliant cut white diamonds and a solitary black diamond at 12 o’clock set into black gold. In line with Jean Dunand’s commitment to fostering mÉtiers d’art, the technique of invisible setting has been used to mount the 92 Top Wesselton baguette diamonds on the bezel and lugs. This meticulous and extremely time-consuming technique allows these opulent stones to shine in all their faceted glory without any visible means of support, dispensing with prongs, claws, or other traditional means of securing stones. Underneath the gleaming surface of the case and lugs lies a miniature world of support systems to anchor the diamonds in place. To confer solidity to the structure, the rose gold undercarriage of the invisible setting needs to be at least 2mm thick and explains why invisible set pieces contain more gold than traditionally set ones.