Nautilus for the ladies, the legend continues


Nautilus for the ladies, the legend continues 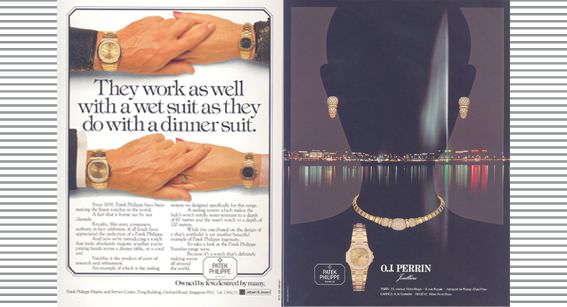 
When, in 1976, Patek Philippe launched the Nautilus - featuring a steel case evoking a porthole flanked by two ‘ears’ and its articulated bracelet with recessed links - it was a huge hit. Sporting a 42-mm octagonal bezel with rounded angles, it seemed nearly ‘monstrous’ for the times. With its water resistance, allowing it to descend to 120 metres, the watch declared loud and clear that it was one special timepiece. Its advertisements at the time also affirmed this: ‘One of the world's costliest watches is made of steel.’ 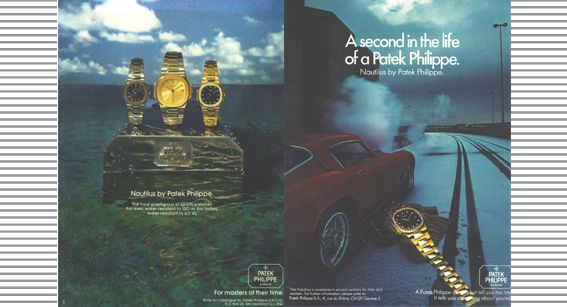 
How could a company as traditional and venerable as Patek Philippe dare to release such a sculptural watch at a time when the height of luxury was seen in the absolute simplicity of a round gold timepiece that was as flat as pos-sible. Had the brand gone crazy?
“At the time, we were not looking to do a sensational launch. We were merely presenting a new model,” explains Philippe Stern, who would take over the reins of the family company the year after the launch. Yet, with its Nautilus, Patek Philippe demonstrated that the brand was fully aware that times were changing - and changing fast. 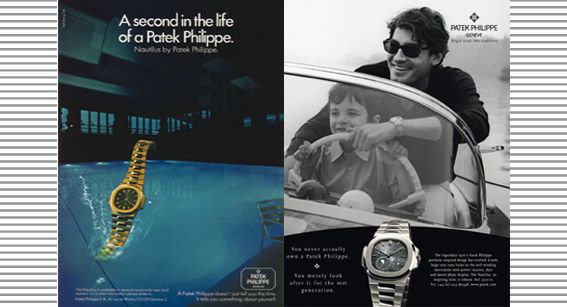 
Change of epoch
The year 1976 saw the election of Jimmy Carter, the death of Mao Tse-tung, and the arrival of the punk movement . . . “People were becoming more active,” continues Stern. “Many were into physical fitness and exercise and wanted to keep or get into shape. So, for the first time, they were looking for a robust and sturdy watch that they could wear during sports activities. Creating such a timepiece was totally new for a manufacturer in the haut de gamme sector but we decided to listen to our clients.”
As is the case for all precursors that experiment with new ideas, success of the most audacious products comes gradually. “Until the beginning of the 1980s, the demand for the Nautilus was moderate,” adds Stern. Then its popularity increased so much that it was here to stay, even to the point of becoming one of the great watch icons of the 20th century.
Its iconic status results from the fact that the Nautilus has not been perceived only as a sports watch. Of course, with its automatic movement, instantaneous jumping date, and its thickness of only 3.15 mm, it was perfectly adapted to this use, thanks notably to its unusual construction. It had an ingenious two-part case, whose caseback was integrated into the bracelet, and was assembled by four screws in the ‘joints’ situated on the two sides. This made it perfectly water-resistant and impermeable to the elements - dust, moisture, and heat from the environment. 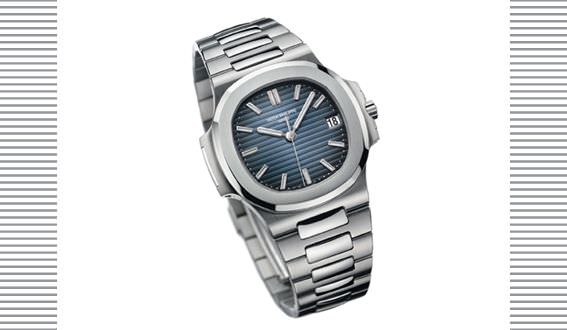 
But this particular design - featuring a bezel in the shape of a softened octagonal porthole, an elegant and dual-tone dial created by the motifs in relief, and the ergonometric feel of its bracelet with polished central links and satiny outer links - gave the watch an appearance that was sturdy while still having a pure and clean look for city wear. This was affirmed by another ad from that period: ‘They work as well with a wetsuit as they do with a dinner suit ’.

On the feminine side
When the Nautilus was launched in its ladies’ version in 1982, women understood immediately the double nature of the piece. Its success too was immediate. At the time, the ladies’ Nautilus was the only Patek Philippe timepiece that indicated the date in addition to the hour, minutes, and seconds. With its steel crown set with a diamond, another unique particularity of the epoch, it soon became a reference. 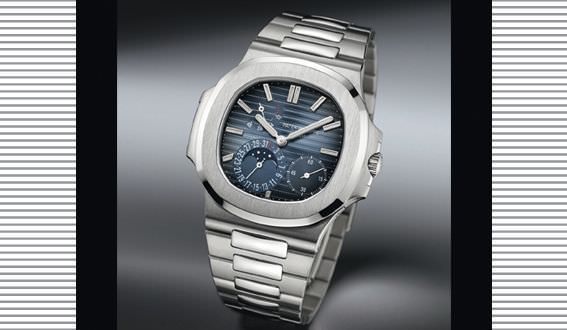 
It also demonstrated the exceptional versatility of its subtle design by being available in precious metals as well as a full jewellery version set with rubies, emeralds, or diamonds. With its quartz movement and water-resistance to 60 metres, it was one of the first sports watches for women, yet at night it became a star of the most formal occasions.
During the decades that followed, the Nautilus collection gradually expanded with the addition of various models. Starting in 1981, the original watch, the 42-mm ‘Jumbo’ was joined by a smaller 37.5 mm model (Ref. 3800) offered in steel, gold, gold and steel, and platinum. To celebrate its 20th anniversary, the Nautilus collection again grew to include the first 18 carat gold version on a leather bracelet, with a tradit-ional case in three parts featuring a screw-in caseback and crown, which guaranteed water-resistance to 120 metres. It was this model, the Ref. 5060, that inspired the ‘cousin’ of the Nautilus, the equally famous Aquanaut.
The collection continued to add models, including the first version to have a complicated movement in 2004 - the Calibre 240 PS IRM C LU, an automatic movement with lunar phases, date, and power reserve indicator. This steel watch, Ref. 3712/IA, would become a classic. Yet its production lasted only one year. Why? Because, for the Nautilus’ 30th anniversary in 2006, Patek Philippe ceased production of all previous Nautilus watches, and launched a new collection. 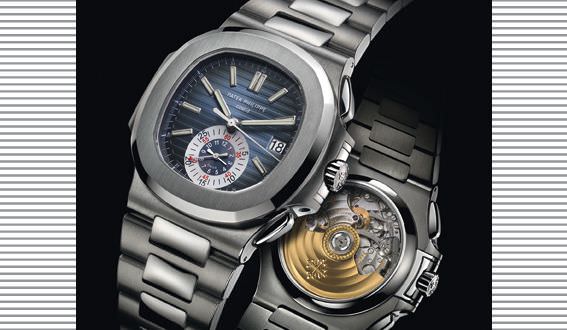 
30 years
The aesthetic evolution was clear, but subtle. With absolute respect for the line’s essential design codes, the proportions of the watch were revisited in order to improve, even more, the wearer’s comfort and to soften the forms. The famous ‘joints’ were rounded slightly and the hands and the new baton hour markers were enlarged for better readability. All the models now have a sapphire crystal caseback. The sizes also increased somewhat, passing from 38.4 mm to 43 mm. But for the rest, the details are definitely Nautilus. 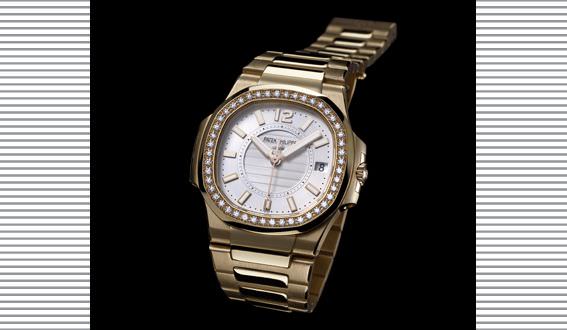 
Patek Philippe also introduced a timepiece mounted on a leather bracelet that features an automatic movement with complications, the Ref 5712/1 in steel or the Ref 5712 in rose or white gold, with indicators for the date, moon phases, and power reserve.
In steel, the Geneva brand is also proposing its first Nautilus column wheel chronograph equipped with an instantaneous date and chronograph centre seconds hand with flyback function (Ref. 5980/1A), a large Nautilus (Ref. 5711/1A), and a 38.40 mm piece (Ref. 5800/1A), which are already delighting women everywhere. 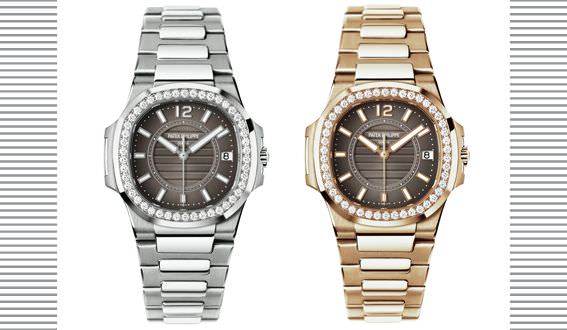 
New Ladies’ Nautilus
Now, however, the brand has devoted an entire new Nautilus collection to the ladies. With this new offer, Patek Philippe intends to become a major player in the elegant sports watch sector. The new Ladies’ Nautilus has thus been finely redesigned in a very contemporary spirit while remaining completely faithful to the fundamentals of the original Nautilus. 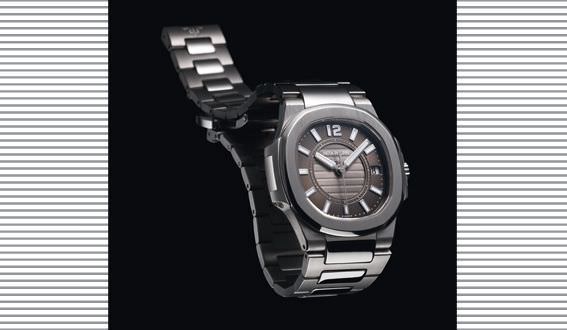 
In keeping with current trends, the size has passed from 25.8 mm to 32 mm. The bracelet and case have preserved the alternating polished and satiny surfaces but have been refined even more. The dial has been reinterpreted, the horizontal relief motifs occupying an oval at its centre. The rectangular hands are more vigorous and continuously point to the gold hour markers recovered in, sportiness oblige, a luminescent material. Another ‘sporty’ detail, the fold-over clasp is equipped with a double security system.
The new Ladies’ Nautilus comes in two different styles: the Ref. 7010/1 and the Ref. 7011/1, both driven by a quartz movement (Calibre E 23 SC with central seconds hand and date indicator), in a case that is water-resistant to 60 metres.
Both timepieces are proposed in 4N rose or white gold with silvered white or anthracite grey dials. The Ref. 7011/1 model is decorated with a satin-finished bezel, while the Ref. 7010/1 jewellery version showcases a bezel set with 46 round diamonds for a total weight of approximately 0.8 carats. These elegant timepieces are both worthy heirs to Patek Philippe’s legendary Nautilus line, born in the 20th century and continues into the 21st century. 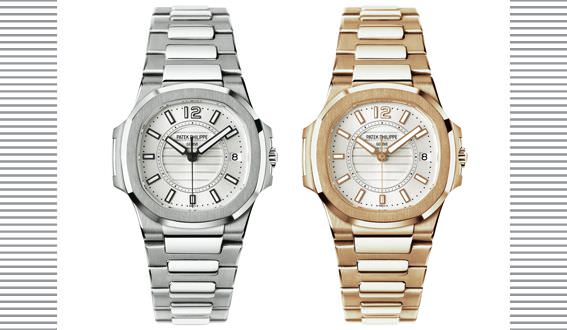