Exactitude, precision and chronometry are at the core of research in timekeeping carried out by Jaeger-LeCoultre. These words are not merely a marketing slogan but a veritable watchmaking quest as was recently demonstrated by the results of the Concours Chronométrie 2009, organized by the Watchmaking Museum in Le Locle. The Swiss Manufacture won the first two prizes with its Master Tourbillon that took the highest honours (909 points out of 1000), and that was immediately followed by the Reverso Gyrotourbillon in second place with 908 points out of 1000. “We had to take part in this competition because this measurable precision determines the quality of our products,” declared Jérôme Lambert, CEO of Jaeger-LeCoultre during the event.

This important requirement for chronometry, epitomized in the competition by its tourbillon watches, can also be found in the brand’s other approaches to timekeeping, some of which are totally original. Among them is the very innovative ‘Dual-Wing’ concept that gave birth to the Duomètre collection. Inaugurated in 2007 with the first Duomètre à Chronographe timepiece, this collection has added a second realization this year—the Duomètre à Quantième Lunaire. 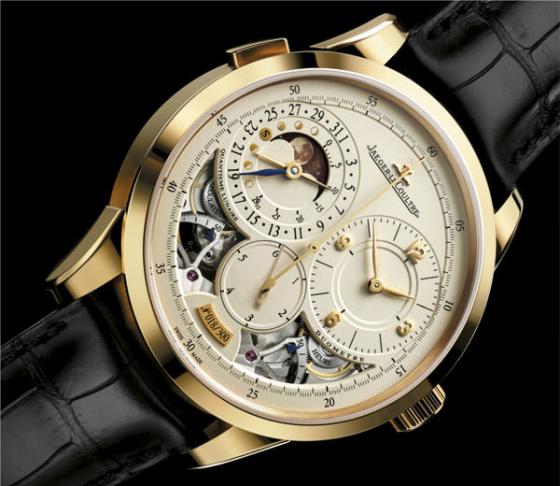 Constant force duality
The development of the ‘Dual-Wing’ answers a particular need. In traditional watchmaking, the addition of a complication to a watch’s basic functions (hours, minutes, seconds) produces certain types of interferences by siphoning off some of the energy from the barrel. These alter the constant flow of power de-livered by the barrel to the gear train and the escapement. This is because the activation of a function that is not constantly driven by the gear train, such as the activation of a chronograph or a chime or even the passage of the date, for example, requires a certain amount of energy, thus mechanically causing a small drop in the amplitude of the balance. By taking a small amount of energy from the barrel for its own requirements, every complication causes a small variation in the time measurement. Placed end to end, these variations can distort the high precision and chronometry of this measurement over the long term.
The challenge for the watchmakers at Jaeger-LeCoultre was how to overcome this difficulty—one that is inherent to classic timekeeping. In the end, they came up with a truly revolutionary solution. They would place two independent watch mechanisms into the same calibre, each driven by its own barrel and synchronized by a jumping seconds hand (seconde foudroyante) driven by the escapement. Thus, by separating the energy of the movement from that of the complication, a constant power supply can be maintained to the regulating organ.

Coordination of the jumping hands
In the Duomètre Chronographe of 2007, the first gear was used uniquely for time measurement while the second was dedicated to the chronograph. The Duomètre à Quantième Lunaire, based on the same innovative idea, functions differently, however. Its new Calibre Dual-Wing Jaeger-LeCoultre 381 is divided into two sections, each with its own barrel and spring motor supplying a power reserve of 50 hours. Both, however, are wound by the same crown that, depending on whether it is turned clockwise or anti-clockwise, winds one barrel or the other. The first mechanism is dedicated to the hours, minutes, seconds, jumping seconds, date and lunar phases. The second is exclusively used for the escapement. These two distinct mechanisms are coupled and coordinated by the jumping seconds hand. 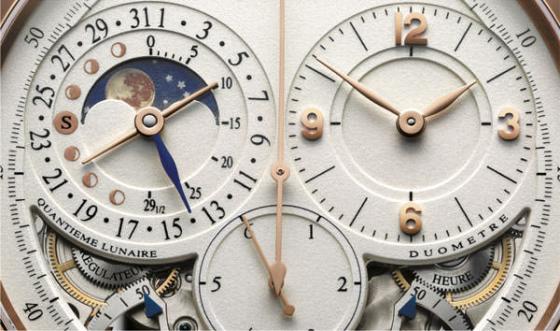 The Duomètre à Quantième Lunaire therefore has two seconds hands: a traditional seconds hand and a jumping hand, which makes six jumps per second, giving it an accuracy of 1/6th of a second. Their two escapement wheels are positioned on the same axis. One functions with the palettes and the other drives the star of the jumping seconds. When the crown is pulled, the two hands return instantaneously to zero while the escapement mechanism continues to tick and the balance remains working (in the traditional stop seconds, the balance stops).
When the crown is pushed in, the two perfectly coordinated hands continue working simul-taneously. The gears of the hands mesh in-stantly with the time measuring mechanism that has remained active, and then immediately start turning at the watch’s rhythm—21,600 vibrations per hour (3Hz). The adjustment of the top of the hour is now nothing more than an illusion, as in most cases (this is because when a balance stops, it takes several minutes before it regains its vibrating precision), but it is a tangible and measurable reality.

The outside and inside
The dual technical nature of the movement of the Duomètre à Quantième Lunaire expresses itself aesthetically with a dial whose surface is finely grained and which is exceptionally readable. The dial itself is clearly divided into two distinct zones. The hours and minutes are displayed in a counter on the right side of the dial with the large seconds hand at the centre. The jumping seconds is in a counter located in the lower part of the dial while the date and lunar phases are displayed on the left.
The date scale with its blued hand is carried on the edge of the lunar phases that appear in a window. This moon indicates the lunar phases in the northern hemisphere. As for the southern hemisphere, the moon phases are displayed by a double hand that points to the age of the moon. The natural lunar cycle is exactly 29.53 days but its mechanical indication, based on a traditional star with 59 teeth, is ‘only’ 29.5 days. The resulting variation—44 minutes and 2.8 seconds per month—can be corrected using a pusher piece located at 12 o’clock at the edge of the middle case. In the lower part of the dial, on either side of the jumping seconds counter, two openings partially reveal the movement and permit the reading of the two power reserve indicators whose functions are directly engraved on the barrels.

Superlative finishing
On the back of the watch, under a sapphire crystal, can be found the extraordinary architecture of this very special movement whose meticulous finishing emphasizes the watch’s dual nature. Bevelled with polished sinks, the mechanism’s bridges that are used to measure time have straight and rectilinear lines, while those used for the date and lunar phase complications are made up of arabesque motifs. The two barrels are spiral-shaped and hand bevelled. The ratchets are brushed with sunray motifs and engraved with gilded indications for the ‘movement’ and for the ‘hour/minute’ functions. The surfaces of the wheels and pinions have been softened and spiral-shaped. The screws are flame-blued, and the ébauche itself is, as in the most traditional timekeepers, carved in non-treated nickel silver.
The traditional qualities of this totally innovative movement are also found in the design of the 42mm case that, with its brushed, polished, and satin finished surfaces and curved sapphire crystal, is inspired directly from the pocket watches created during the long history of the Manufacture. Water-resistant to 50 metres, the case features soldered lugs, a pusher piece at 10 o’clock that is used to correct the date, and a pusher at 12 o’clock for correcting the lunar phases. Produced exclusively in precious metals, the Duomètre à Quantième Lunaire comes in an 18 carat yellow gold version available in a limited series of 300, as well as a non-limited series in 18 carat pink gold. It comes mounted on a black or chocolate alligator strap with an 18 carat gold fold-over clasp.