What is hiding in Patek Philippe’s ‘Reference 5208P’?


What is hiding in Patek Philippe’s ‘Reference 5208P’?

At first glance, who would suspect, under the clear face of the ‘Reference 5208P’, the presence of an exceptional Grand Complication, the second in the class of Grand Complications that make up the ‘current’ Patek Philippe offer, right after its famous Sky Moon Tourbillon?
The simplicity of the appearance, the purity of the lines, and the absolute readability of this exceptional timepiece is, we might say, a form of ultimate politeness, of ultimate refinement. When so many other timekeepers conspicuously exhibit their own complications, the Patek Philippe Triple Complication Reference 5208P—with an air of refinement, reserve and restraint—seems almost modest by comparison. In its own way, it is the quintessence of the Patek Philippe ‘style’, which can be described as art, artisanal, an ethic, and an innovative technology that values distinction, usage and reliability above all else. And yet…
Under the nearly barren dial hides a Calibre that combines an automatic minute repeater movement, single pushbutton chronograph, perpetual calendar in instantaneous windows and lunar phases. In other words, this watch brings together three major complications in a movement measuring 32mm in diameter and 10.35mm in height, with 701 component parts. Its name: the Calibre R CH 27 PS QI. In addition, this calibre beats to the rhythm of an escapement and balance spring made of Silinvar®, a derivative of silicon: a first in the family of Patek Philippe’s Grand Complications.

Much more than just ‘stacking’
The design, construction, development, manufacture, decoration and certification of such a movement posed a great many challenges to the engineers and watchmakers of the Geneva brand. As can easily be imagined, coupling the minute repeater, chronograph and perpetual calendar together is not merely a simple matter of stacking one on top of the other. One of the major difficulties of this long elaboration resided in the necessity of creating veritable mechanical deviations, perfectly controlled, between the automatic movement base, the chronograph, the hour display and the chime system. Thus, it meant placing the chronograph mechanism between the movement base and the instantaneous-display calendar module. As a direct connection between the hour hand and the chime of the minute repeater was impossible, it was then necessary to design detour systems in order to engage the hour and the chronograph while perfectly synchronizing the visual indications and the hour chime. The development of this system resulted in several patents.
The new Calibre R CH 27 PS QI is made up of three ‘layers’, or tiers, we might say. The first layer contains the base movement, an automatic with minute repeater that can be admired at the back of the watch with its micro-rotor and its chime regulator protected under a gold Calatrava cross. The ’coupling’ of this base calibre with a single pushbutton column-wheel chronograph posed serious questions about the energy transmission of the chronograph. The engineers at Patek Philippe therefore came up with the idea of adding a large wheel, at the centre, geared by a pinion to the minute wheel, which would interrupt any direct link between the hour hand and the chime of the minute repeater, thus requiring the aforementioned detour.

Drawing on the chronographic repertoire
In addition, the chronograph had to be the thinnest possible (2.4mm) in order to avoid increasing the total thickness of the calibre in a significant manner, and subsequently the watch. Delving into their very rich repertoire of chronographic movements, the Geneva watchmakers drew inspiration from several of their earlier realizations, most notably the calibre CHR 27-525 PS, the flattest split-seconds chronograph movement in the world that featured a column-wheel control and vertical clutch.
They borrowed the friction drive system of the minute and hour counters that, while ensuring the refinement of the ensemble, allowed for the compensation of the differences in torque between the start and stop modes of the chronograph. This provided for perfectly regular amplitude of the balance. The same calibre also inspired the toothing profile of the chronograph’s gears, specially designed to reduce friction and optimize power transmission.
Yet, it was another calibre in the Patek Philippe repertoire, the manual-winding CH 29-535 PS, that provided the patented hammers for the self-regulating return to zero, thus ensuring the accuracy of their positioning to the nearest hundredth of a millimetre. At 2 o’clock, a single pushbutton activates the start, stop and return to zero of the seconds and the fractions of seconds, using a central seconds hand, and the hours and minutes by counters placed at 3 o’clock and 9 o’clock, respectively.

Instantaneousness and synchronization
Passing from the chronographic level to the instantaneous perpetual calendar with aperture displays level, meant making major modifications to the construction and architecture of the movement, as already mentioned. In the restricted space of the chronograph, it was necessary to integrate a detour system for the minutes because the cannon-pinion for the minutes could not traverse the mobile of the chronograph. The rotational movement of the cannon-pinion of the minutes is therefore deviated laterally to the upper level of the chronograph and, at this level, is sent to the centre where it drives the hour and minute hands, the instantaneous displays of the calendar, the lunar phases, and a discreet day/night indicator.
The instantaneousness and synchronization of the calendar aperture displays are assured by a large lever, composed of 15 parts, that intervenes when, for example, at midnight all the displays must jump together. In addition, two jumper springs constantly equalize the energy transmitted to each change of indication so that it is neither too strong nor too weak. This avoids partial indications or problems from too much energy. When all is said and done, this ingenious arrangement of the calendar in windows leaves a large space for perfectly displaying the chronographic minutes and hours.
The third complication is the minute repeater. As we explained above, the minute repeater mechanism itself is placed at the base of the movement. It is the fruit of many years of research conducted by Patek Philippe and its watchmakers in this domain—not less than nine references of minute repeaters are in the brand’s current collection. It represents a quest for sound, for the acoustic signature of each piece that required research into the best metal alloys as well as optimization of the form of the gongs and how they are fixed in place. This does not even go into the adjustment of the racks, snails and other hammers that come together to produce the most crystalline sound possible—a sound whose quality is, for each piece, personally approved by Thierry Stern and Philippe Stern, the President and Honorary President of the Geneva company.

Advantages of silicon
Looking at the calibre through the sapphire caseback of the timepiece, an experienced eye can catch a glimpse of the technological aspect of this Triple Complication in the form of its Pulsomax® escapement and its Spiromax® balance, both made in Silinvar®. But why has Patek Philippe placed so much effort on this technology?
When we ask this question to the watchmakers responsible for the watch’s development, they are categorical in their response. Here, the first advantage is in the chronograph’s performance and reliability. The escapement and balance spring made in this silicon-derived material offer added energy efficiency (about 30 per cent more) which goes directly to the chronograph. Moreover, the same watchmakers emphasize the remarkable consistency of operation obtained by these Silinvar® components as well as their superior durability. For a chronograph, which consumes a lot of energy, whether in the stop or start mode because of friction, this represents a considerable advantage.

An uncluttered face
In seeing the Patek Philippe Triple Complication Reference 5208P for the first time, you would not think that twelve displays share its charcoal-colored solid gold sunburst dial since the dial is so pure, almost bare. The three calendar apertures—framed by polished white gold—are displayed in a circular arc in the upper part of the dial, thus leaving the necessary space for the two auxiliary dials of the chronograph and the small seconds at 6 o’clock, surmounted by an inversed window showing the lunar phases. Two additional small apertures are hidden at the base of the auxiliary dials of the chronograph, with the leap years between 4 o’clock and 5 o’clock, and the day/night indication between 7 o’clock and 8 o’clock. Beneath this obvious readability and great elegance is hidden a complex dial, meticulously hollowed out so that it can be placed at the lowest possible position against the movement, thus preserving the thinness of the piece.
The dial is also very demanding from a technical point of view. The large apertures and the large typography of the displays in a small space require a great deal of precision in the placement of the apertures and the secondary dials. For the calendar discs that jump instantly with extreme accuracy, the least discrepancy cannot be tolerated. 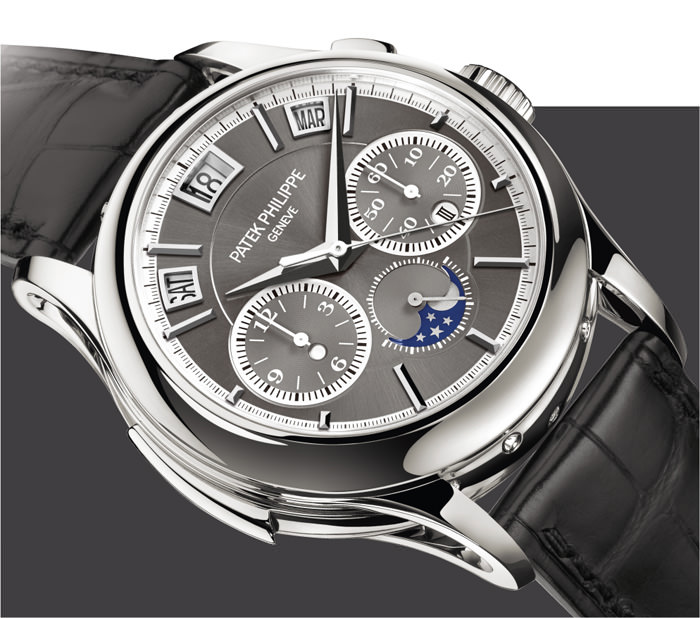 A surprising profile
Only the small slide on the left side of the case indicates that a minute repeater is present on the watch. At 2 o’clock, above the crown, is a single pushbutton that activates the chronograph. Four discreet correctors are spaced out on the sides of the case: day, month, lunar phases and date. At 6 o’clock, a small diamond, as is usual, signals that the case is made in 950 platinum. The 42-mm round case, in three parts (base, middle case, and bezel), has a height of 15.70mm. While it seems so classically elegant when seen from the top, it reserves a surprise when viewed from the side.
The case is placed between and attached to two clamps. Thanks to this particular architecture, the horns can have an entirely openwork design, thus streamlining the lines of the case and giving it a surprisingly modern appearance. In passing, we might mention that the polishing of both the outside and inside of the platinum openwork horns requires special skill.
Mounted on a brilliant hand-stitched chocolate brown square-scaled alligator strap with a platinum fold-over clasp, the Patek Philippe Triple Complication is delivered with two interchangeable case backs: a sapphire crystal and a solid platinum back that can be engraving with any type of personalization desired by the owner. Like all the grand complications of the Geneva brand, the Patek Philippe Triple Complication is presented in a rotating winder case that ensures the continuous good operation of the piece.
It is also endowed with the Patek Philippe Seal, certifying the design and technology of the piece, and is only delivered after a battery of tests and checks that have no comparison in timekeeping. The Patek Philippe Triple Complication Reference 5208P has now entered into the Patek Philippe collection, where it occupies a place of honour. The only problem is that the timepiece is very rare. In spite of all the efforts of the Geneva manufacture, it can only be delivered in tiny quantities. 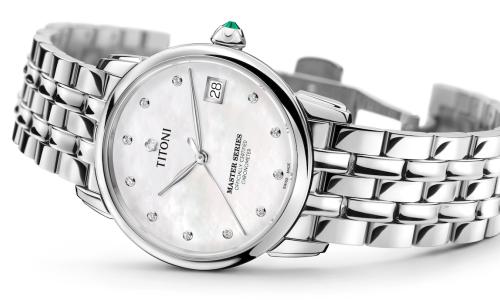 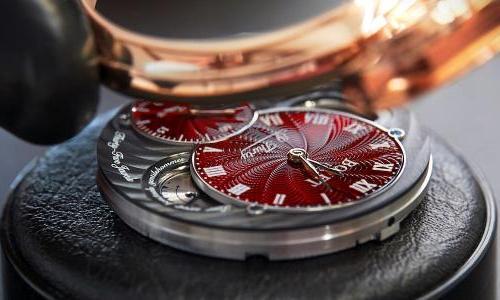