Ref. 5204, The latest in Patek Philippe’s stable of “house” chronographs


Ref. 5204, The latest in Patek Philippe’s stable of “house” chronographs

Since 2005, Patek Philippe has consistently carved out a new space for its chronographs. Up until that time, the only basic movement whose ébauche came from outside the Geneva-based manufacture was the chronograph calibre 27-70. Produced exclusively for Patek Philippe by Nouvelle Lemania (Swatch Group), this calibre was made in accordance with very strict specifications and was then finished and assembled in Geneva. Even though it was considered to be one of the most beautiful and best performing chronographs in the world, Patek Philippe was determined to surpass it by producing its own chronograph calibres. The brand’s decision took on the form of a veritable offensive. The effort paid off, however, and, in a little more than six years, the family-run manufacture has developed no less than four new basic chronograph calibres.

In 2005, the first “house” chronograph Patek Philippe introduced its first entirely in-house manufactured chronograph calibre in 2005. Inspired by an historic movement dating back to 1902, the CHR 27-525 PS calibre is a manual-winding split-seconds movement with column wheels and the thinnest ever produced (5.25 mm in thickness). With two column wheels, two single pushers, and the possibilities for maintaining a reference time, as well as its numerous other technical and aesthetic characteristics, this calibre was placed in the highly prestigious timepiece, the Reference 5959P, presented in a limited series of ten pieces in a platinum “officer’s-style” case.The following year, in 2006, Patek Philippe revealed a new calibre, the CH 28-520 IRM QA 24H, the first chronograph movement—automatic this time—that was totally designed, developed, and produced by the manufacture. With the addition of the famous and patented annual calendar mechanism, this new automatic column-wheel chronograph has a split-seconds function, power reserve indicator and day/night indicator. With its original construction, this calibre drives the Reference 5960P, to which it offers an elegant, dynamic, and balanced dial with its very characteristic single counter that regroups the chronograph’s hour and minute counters. This same movement also equips the Nautilus Ref 5980/1 chronograph, with the same single counter, but without the annual calendar.In 2009, the first manual-winding classic chronograph, the Calibre CH 29-535 PS, was produced. At its introduction, this manual movement—crafted 100 per cent in the Patek Philippe ateliers—surpassed and thus replaced the Calibre CH 27-70 based on the hitherto utilised Nouvelle Lemania calibre. It equipped the famous Ladies First Chronograph, before being used the following year in a men’s version, the Reference 5170. A few details of this superbly designed classic calibre, consisting of 269 components, are: column wheels with polished cap; a toothed-wheel clutch with an S-shaped lever; Breguet balance spring; large four-arm Gyromax balance with four inertia-blocks and a frequency of 4 Hz or 28,800 vibrations per hour. Its six patents pending not only deal with improvements relating to better energy transmission, reduced friction, increased precision, and a reduction in vibrations of the hands, but they also simplify the work of the watchmaker. By allowing for optimal adjustment, these innovations offer the timepiece greater operating reliability while contributing to a deeper mastery over the art of the chronograph. The following year, 2010, marked both the definitive retirement of the Calibre 27-70 Q in all its versions (after 25 years of very good and loyal service), and the arrival of the Patek Philippe Triple Complication Reference 5208P. The quintessence of the Patek Philippe style, it has an uncluttered dial that conceals a self-winding movement, the Calibre R CH 27 PS QI, which integrates a number of complications: minute repeater, mono-pusher chronograph, an instantaneous perpetual calendar with apertures, and moon phases. The addition and combination of three major complications requires not less than 701 component parts, all housed in the small diameter of 32 mm with a height of 10.35 mm. Moreover, for the first time in the family of Patek Philippe Grand Complications, this calibre beats to the rhythm of an escapement and balance spring made of Silinvar®, derived from silicon.

5204: perfecting the mastery over the chronographIn 2012, Patek Philippe continues to perfect the mastery over the chronograph with the introduction of the split-seconds perpetual calendar chronograph Reference 5204. Developed on the Calibre CH 29-535 base introduced in 2009, this movement includes many new developments, among them a new split-seconds mechanism as well as a newly created perpetual calendar. It is now at the pinnacle of the new generation of Patek Philippe chronographs developed since 2005. Right from the beginning, the basic CH 29-535 was designed to accommodate future developments such as the split-seconds hand and the perpetual calendar.Since 2005, progressive and continuous im-provements have been made to the calibre, thus creating a “top” product, as Marc Lemonnier, constructor, and Philip Barat, development director, say modestly, even too modestly. At first glance, these improvements—added over time, one after the other—may seem limited, only dealing with the details of the construction or of the mechanical functioning. Yet, it is the patient addition of these accumulated devices that has led to real and decisive advances, and that makes the new generation of Patek Philippe chronographs truly exceptional pieces. 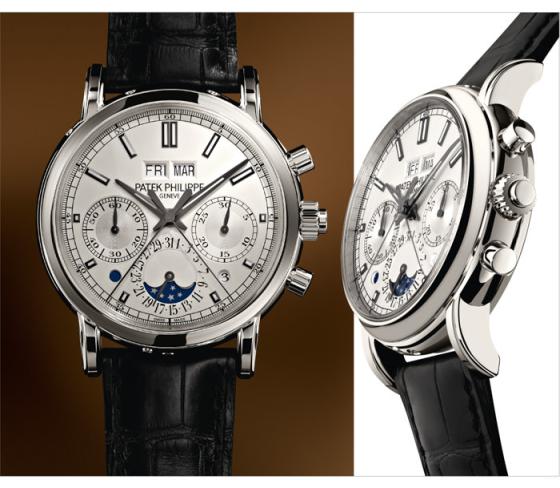 A new lifting-leverAs an example, let’s look at the changes made to the CH 29-535 basic chronograph movement (created in 2009), which allow it to accept the split-seconds complication. The main originality of this split-seconds hand is the use of a completely new lifting-lever system. Normally, when you activate the chronograph, the loss of amplitude is around 30°, to which you must add a further loss of amplitude of 30° when the split-seconds hand is activated. The lifting-lever system developed for this new calibre avoids the friction on the heart-piece when the split-seconds hand is started, thus gaining 30° in mechanical amplitude. Instead of the traditional “octopus” and its arms (which, because mounted on the column wheel of the split-seconds hand, always turns in the same direction and must be equipped with a spring allowing it to return to zero), the new system developed by Patek Philippe is composed of an arm in the form of a swan’s foot commanded directly by the column wheel, thus preventing the two hands from separating. For its return to zero, the watchmakers replaced the roller with a flat, thus reducing the friction and providing better stability for the two hands. The heart-piece has been slit in order to accept the runner with flat, which no longer touches the shoulders of the heart-piece. Finally, the spring no longer rubs, since it is now placed at the end of an arm. The polished cap of the split-seconds column wheel now becomes the eccentric spring of the split-seconds arm. This patented mechanical architecture adds to the six patents that are already pending on the basic movement, allowing these innovations. Moreover, the two bridges of the chronograph that were earlier separated have been reunited into one single bridge, thus offering a solid and unique base for the split-seconds bridge. The hammer bridge has been extended and the wheel of the split-seconds has been rebalanced so that ultimately the mechanical phase difference between the two chronograph seconds hands has been reduced by 75 per cent. 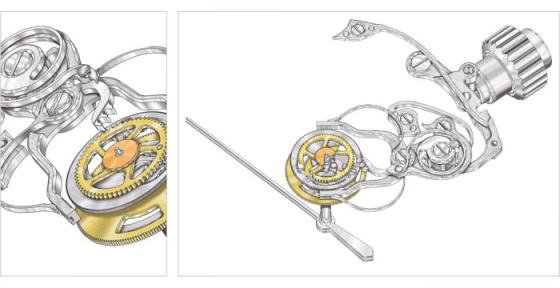 An ultra-flat perpetual calendarThe perpetual calendar module integrated into this calibre is identical to that of the preceding Reference 5270, the first triple complication wrist chronograph presented last year. Remarkably thin (1.65 mm), this mechanism, comprising 182 component parts, combines “large levers, star-wheels for the date, day, and month, cams for the year, movable cams for leap years, jumper springs,” or in other words, 182 parts that have been tooled to the nearest micron and then hand finished—straight-grained sides, smoothed surfaces, chamfered and polished edges. Even the teeth in the gears and pinions have been “polished by hand, one by one, on a hardwood buff wheel”. This has all been done, not only with a concern for beauty, of course, but also with the goal of optimising the entire chain of energy transmission.

Elegance and readabilityWith its 496 component parts, of which 60 are used for the split-seconds hand alone, this chronograph movement vibrates at 4 Hz and has 65 hours of power reserve. It is housed in a superb platinum case measuring 40 mm in diameter with a thickness of 14.25 mm (not counting the noticeable curvature of the protective sapphire crystal). This relatively thin size demonstrates that not only is this complex movement housed in a very small space but that it evokes truly timeless elegance. This timeless quality is emphasised even more by a series of small but striking details that range from the curvature of the crystal to the affirmed form of the pushers that recall the grand historic era of the chronograph. We must also mention the lovely concave shape of the bezel—a shape that is particularly difficult to polish—and the fine elongated lugs that enhance the harmonious proportions of this timekeeper and give it its timeless allure.This distinct classicism is also seen in a number of small contemporary touches such as the hour and minute hands with three faces in black oxidised gold, whose centre is coated with Superluminova. Four counters share the dial in a manner that allows for the greatest readability, with a total of twelve separate displays housed on the silvered opaline background.Encircled by twelve white-gold applied hour markers, the day and month are indicated in the traditional manner in two apertures lined up at 12 o’clock. The date hand is integrated into the aperture of the moon phase display at 6 o’clock, while the small seconds and 30-minute counter are placed in off-centre azure sub-dials at 9 and 3 o’clock. The leap year and day/night indicators appear in two small round openings at 4:30 and 7:30.

Mounted on an alligator strap with matte black square scales and a platinum foldover buckle, the Ref. 5204 is, of course, endowed with the Poinçon Patek Philippe (Patek Philippe Seal). And, as with all the platinum cases from the very sophisticated Geneva watch brand, a small Top Wesselton diamond is discreetly set in the case middle at 6 o’clock. Noblesse oblige.