The Duomètre Sphérotourbillon by Jaeger-LeCoultre, the ultimate watch and an inaugural timepiece


The Duomètre Sphérotourbillon by Jaeger-LeCoultre, the ultimate watch and an inaugural timepiece

The last few years have seen a great increase in the research conducted on a variety of watchmaking topics, from the introduction of new regulation and escapement systems, to obtaining high frequencies, to combining several tourbillons together. Yet, among all these attempts, there is one that is quite different and particularly promising—the Dual-Wing concept. This revolutionary idea, born in 2007 at Jaeger-LeCoultre, proposes a completely original dual mechanical structure, one so unusual that Jérôme Lambert, CEO of Jaeger-LeCoultre, talks of a “real revolution and not a simple evolution, which adds a whole new chapter to the history of timekeeping”.Beyond the very notable chronometric and functional improvements as well as the exclusive innovations that the Dual-Wing system affords, it also permits the traditional complications to be revisited, in depth, by offering a new and unique stylistic expression that is immediately recognisable while still displaying grand watchmaking classicism. So what exactly is the Dual-Wing, this concept that opens new technical and design avenues, such as those seen in the Duomètre collection?

One watch, two brainsMetaphorically speaking, the Dual-Wing can be summed up in four words: one watch, two brains. In other words, two different mechanisms co-exist inside one and the same movement. They share the same regulating organ, but each has its own energy source. The main advantage of this new type of two-headed structure is that the energy consumption required by the complication does not impact the constant energy supply required for the precision and accuracy of the regulating organ. This revolutionary co-existence can take on various architectural structures depending on the functionality of the piece.This new radical design found its first application in the Duomètre à Chronographe watch that was introduced in 2007. In this unusual timepiece, the chronograph function shares one and the same regulation with the timekeeping function. But, in addition, each of these two functions has its own independent source of energy and its own dedicated gear train. As a result, the operation, starting or stopping of the chronograph do not interfere in any way with the time measurement and do not affect the chronometry of the hours, minutes, or seconds. This same independent dual-energy source also allows the chronograph complication to measure the jumping seconds to one sixth of a second.The second application of the Dual-Wing concept, although interpreted quite differently, is seen in the Duomètre à Quantième Lunaire watch, introduced in 2009. In this piece, one of the two independent energy sources is directly dedicated to the regulating organ itself, while the other is used to display the functions of hours, minutes, seconds, date and moon phases for both hemispheres. Their synchronisation is assured by the mechanism of the jumping seconds hand that moves in jumps of one sixth of a second. In passing, we can say then that it is the only watch in the world that can be corrected to a sixth of a second—and this without having to stop the beating of the regulating organ.

World’s first tourbillon adjustable to the secondPresented this year, the new Duomètre Sphérotourbillon is based on another and totally original interpretation of the Dual-Wing concept, which allows the Manufacture to introduce an original complication that can provide the highest level of precision. As in the case of the Duomètre à Quantième Lunaire, Jaeger-LeCoultre Calibre 381, the dual concept of the new Jaeger-LeCoultre Calibre 382 offers a dedicated energy reserve to the regulating organ. This allows it to continue to function when the time is set at the stroke of the hour, and is carried out by a flyback return with instantaneous re-start. The fact, however, that this concept applies here to a tourbillon regulator makes the Duomètre Sphérotourbillon watch de facto the only tourbillon timepiece in the world that is adjustable to the second. For a tourbillon, this is really saying a lot…

Spectacular multi-axis tourbillon As its name implies, the Duomètre à Sphéro-tourbillon watch is governed by a spectacular multi-axis tourbillon. The first axis around which the tourbillon rotates is concentric with its carriage. The second vertical axis is inclined at a 20° angle in relation to the carriage axis. The combination of these two axes drives the tourbillon through a movement comparable to that of a spinning top, which, while whirling around a vertical axis, simultaneously performs an inclined rotation. This double rotation is performed at different speeds: the rotation around the first axis takes 15 seconds, and that around the other axis 30 seconds. These two movements are spectacularly combined to result in a complete 30-second rotation, which, thanks to this spinning-top motion, compensates for the effects of gravity in various positions (contrary to the traditional tourbillon, which compensates only in the vertical position). At the heart of this three-dimensional device beats a balance-spring that is no longer flat, like traditional balance-springs, but instead cylindrical like those found in 18th century marine chronometers.Above and beyond the stunning visual effect of this flying tourbillon mounted on a ball-bearing mechanism, it represents a major breakthrough in terms of precision, following on from that already achieved by the previous gyrotourbillon presented by the Manufacture in 2004.

Performance and elegance reconciledMoreover, the Duomètre Sphérotourbillon is not merely both accurate and spectacular. After the years of excesses and extravagance seen in the watch industry, this model reconciles extreme performance with elegance thanks to its extremely classical, traditional horological identity codes, the exquisite subtleness of its decoration, its modest size (14.1 mm thick including its cambered sapphire crystal, and 42 mm in diameter), its clever ergonomic design, and its instantly recognisable style.There is indeed nothing random about this particular style. Dedicated to ensuring optimal readability, it is a direct expression of the dual movement driving it. At 3 o’clock, a crystalline grained dial with gold appliques shows the local hour and minutes (or “Travel Time”), as well as the date by means of an indicator moving around its circumference. The small seconds display with flyback function appears at 6 o’clock, while a 24-hour dial at 12 o’clock indicates a second reference (or “Hometime”) time zone. Two power-reserve indications for the two barrels (45 hours) are discreetly shown at 1 and 5 o’clock. In addition to this zone dedicated to indications, the other dial zone is entirely devoted to the kinetic show performed by the sphérotourbillon, which majestically regulates the steady rate of the watch. _ All these features are accommodated within an extremely restrained and timelessly classic case in 18-carat pink gold or platinum (the latter in a 75-piece limited edition). Its use is stunningly simple: a single crown serves to wind the two barrels—clockwise for the functions and counter-clockwise for the tourbillon. When pulled out by one notch, it serves to adjust local time and the date, and by two notches to set the reference time. A pusher at 2 o’clock resets the flyback small seconds hand. 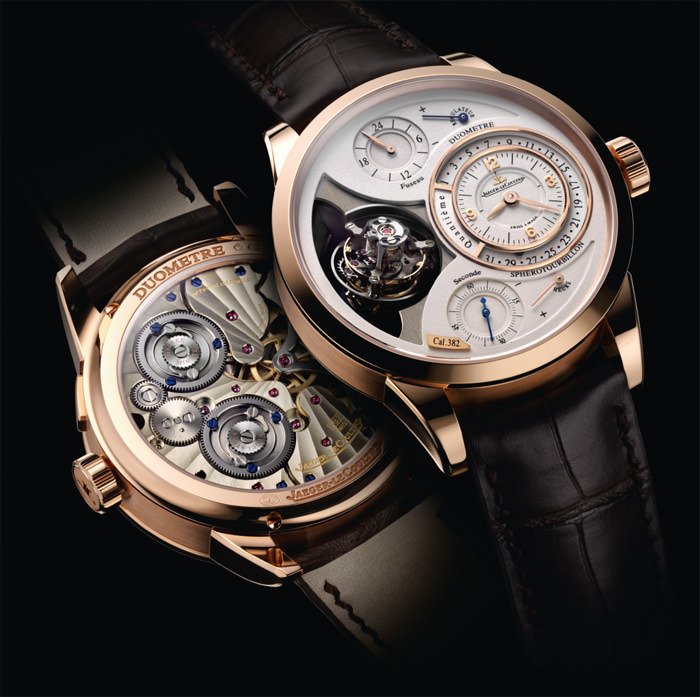 An inaugural timepieceThe Duomètre Sphérotourbillon watch is not only the latest milestone in the long tradition of inventions by the Manufacture Jaeger-LeCoultre, but it is also the inaugural piece in a new generation of grand complications. Representing the latest expression of the Dual-Wing concept, it demonstrates that the construction of movements and complications can be radically different. Contrary to what we often hear—that everything has been done in mechanical watchmaking, so we should just be content to improve on the legacies of the past—it is now perfectly conceivable to dramatically reconsider the operation of the mechanical movement in order to obtain new performances and propose new grand complications with unique operations.Essentially, the line of Jaeger-LeCoultre’s grand Duomètre complications seeks to combine a strong visual appearance with a high-level performance in a classic-looking timepiece, one with a small size that evokes the most rigorous of traditional watchmaking codes. The goal is to offer connoisseurs the “ultimate watch”, so to speak, a watch that offers performance unlike any other, a watch that is easily wearable, a watch that is immediately recognisable, and one that is imbued with grand classicism. While its design is directly related to its technology, it offers a high level of readability and incomparable watchmaking purity. Endowed with absolute stylistic elegance, it remains nonetheless of the highest quality and discretion.

So, what’s next?When asked about the future of the Duomètre collection and the possible future extensions of the Dual-Wing watch concept, the management at Jaeger-LeCoultre clearly did not want to divulge any information on the state of the brand’s research. Yet, we are told, it is only necessary to consider the existing traditional complications and functions, large or small—perpetual calendar, annual calendar, minute repeater, date, etc.—in order to see the immense potential of this technology.The path that Jaeger-LeCoultre intends to follow over the years to come with the Duomètre family is to not only make the traditional functions and complications better in terms of precision and reliability, but also to give them a truly unique and more exclusive character—different, even amazing—as is evidenced in their haute horlogerie styling.Last but not least, faithful to its policy of strictly measured and controlled prices, Jaeger-LeCoultre proposes the Duomètre à Quantième Lunaire at around €28,000. The Duomètre à Chronographe sells for about €35,000 while the Duomètre Sphérotourbillon in pink gold carries a price tag of around €200,000.