Patek Philippe - In search of the perfect balance

Patek Philippe - In search of the perfect balance

1932. The Stern family buys Patek Philippe. The same year, Reference 96 is launched and is promised a great future under the name Calatrava. And so the story of a collection starts. Yet nothing appears more “simple” than this Reference 96, whose round shape and absolute sobriety are dedicated entirely to a single function: that of displaying the time with the greatest possible perfection, in a timeless form. The influence of the Bauhaus movement, whose minimalist principles stem from the conviction that “form follows function”, is evident. The success of this “essential” watch is no doubt due to a precise coordination, a perfect balance between the purity of its form and the simplicity with which it carries out its function. A balance which, contrary to appearance, is far from easy to achieve. Do we not rightly say that “making things simple is one of the most complicated tasks”?

Because in a shape that is as fundamental as the circle, the slightest of details can make or break the balance of the whole, and all of them are interdependent. This is where the creators of the Reference 96 followed another precept of the Bauhaus movement, whose founder, Walter Gropius, said in 1919 that there is “no real difference between the artist and the artisan”. So the Reference 96 is, in its own way, a “work of art” that accomplishes its horological function to perfection. It is without doubt this particular quality that has made the model so successful throughout the 20th century. It now enters the 21st century showing no signs of age.

A long line of variantsOver the past 80 years the Reference 96 has been reinterpreted and produced in different variants in a line of timepieces that only took on the generic name of Calatrava in the 1980s. The original gents’ watch had a 31mm diameter—which seems minuscule by current norms, since the average size of a Patek Philippe today is around 37-38mm. Its shape has gradually increased in size but has also taken on many different nuances, both in terms of the materials used—white gold, rose gold, platinum—and technical innovations introduced for the functions (such as the Reference 2597 from 1958, whose adjustable hour hand allowed the time zone to be changed at will). Having evolved progressively over the years without ever losing the sobriety that gives it its profound identity, it was also offered in ladies’ models, in self-winding watches with coloured guilloché dials, with diamond-set bezels and even with dials in cloisonné enamel or precious wood marquetry.

But in 1973 a model was launched that would become the undisputed flag-bearer for the collection, Reference 3520D. It was the first Patek Philippe timepiece to have Clous de Paris on its bezel. This type of decoration, which is also called “diamond tips”, was first seen in medieval times but made popular much later by Parisian jewellers (hence its name), is a type of guillochage that consists of grooved, criss-crossed lines that form small pyramids arranged next to each other. It is geometrically delicate and, while it makes the watch all the more precious, totally respects the sobriety of the piece, even underscoring it with elegance.

This emblematic Clous de Paris model, with a genuine timeless beauty, has even become the symbol of a union between two people, particularly in the Asian markets, where it is offered in a box containing two identical watches that differ only in size, one for the lady and one for the gentleman. 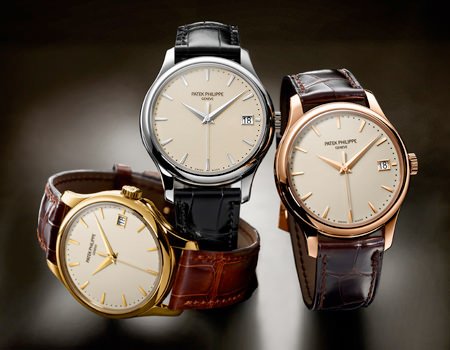 “Officer and gentleman”Another traditional model from the Patek Philippe manufacture is the “Officer” style watch. Its origins date back to the first world war, during which small pocket watches with a hinged back cover were transformed into wristwatches, which were much easier to read in the heat of battle. Originally conceived for officers, these watches kept their designation when they transitioned to “civilian” life. Ever since, Patek Philippe has given certain high-ranking models a discreet cover to protect their transparent case back (which is also perfect for any type of personalised engraving). You may think that it’s quite an easy task to produce a hinged cover according to the normal industry standards. Far from it. In the case of the new Calatrava Reference 5227, in fact, it is a veritable artisanal challenge. Because the new “treasure” in the Calatrava collection is fitted with an “Officer” type hinged cover, bringing together in one timepiece two of Patek Philippe’s purest expressions of watchmaking.

The importance of the caseWhen the connoisseur thinks of Patek Philippe, he often considers above all the excellence of its mechanical movements. But he also knows that the case is equally important. A watch is an ensemble and the production of cases, their design, construction and finishing have always been treated with the same rigour by the watchmakers at Patek Philippe.

For a long time, long before all the workshops that were spread across Geneva were brought together in a huge manufacture, Patek Philippe has had control of all the operations and professions involved in designing and manufacturing cases. They are cold stamped in solid metal in hydraulic presses that exert pressures of several tonnes, then “sculpted” by dies and punches developed within the manufacture. The laborious manual polishing operations that follow are also done internally. But in the specific case of the Officer watches, the production of the delicate hinges used on the cover requires different production methods, high-tech for the precision of the components and manual for their adjustment, which is done to a thousandth of a millimetre. This is all the more important, given that the remit was to imagine, conceive and produce a Calatrava with a particularly thin case and a sapphire crystal back fitted with a cover whose hinge remains totally invisible.

Calatrava Reference 5227The new Calatrava Reference 5227 comes in a round—of course—case with a 39mm diam- eter, stamped in 18-carat gold. From the front, it has a face of the most refined sobriety, enhanced by a smooth bezel with a slightly concave profile and curved lugs. Under a slightly domed sapphire crystal, its cream lacquered dial is a model of readability and uncluttered elegance. The space is punctuated only by applied “bâton” style hour markers in gold between the small gold dots of the minute track. A date display at 3 o’clock is framed by a window whose frame is cut out of gold. Two facetted gold “dauphine” type hands indicate the hours and minutes, while a slender hand with a counterweight beats out the rhythm of the seconds.

From the side, the case shows fine curved grooves that look as if they have been cut out of the solid gold with a gouge and then painstakingly polished. But the flat profile of the case, which is only 9.24mm thick, shows no hint of a back cover concealing the sapphire crystal. You can barely see, under the crown, the small “ear” to open the cover! The invisible hinge, as modest as it may seem, is in fact the result of great craftsmanship. Machining the components and adjusting the cover require more than just microscopic precision. Its assembly requires patience, dexter- ity and know-how to ensure that, once the cover is closed, there is no visible join. And astonishing as it may seem, this also requires good hearing, to make sure that closing the cover gives the required “click”, characteristic of the well-made mechanism.

An avant-garde motorOnce the cover is opened, the eye can wander across the self-winding calibre 324 SC that powers the watch. The level of care apparent in its traditional finishing, most of which is done by hand—bridges with edges bevelled to a round profile, Côtes de Genève, gilt engravings, solid-gold oscillating mass decorated with circular graining and a Calatrava Cross—are in contrast with certain avant-garde characteristics of this movement, the stability and precision of which conform to the strict requirements of the Patek Philippe Seal (-3 to +2 seconds of variation in rate per day). Beating at a frequency of 28,800 vibrations per hour (4Hz), it is fitted with a large Gyromax® balance with four arms, which has a Spiromax® balance spring in Silinvar®, which brings together all the silicon components that Patek Philippe has developed over the past ten years. This very high-precision technology offers the significant benefits of a lack of any need for lubrication and improvements in isochronism (and therefore in precision), the geometry of the components and resistance to shocks and corrosion. Over 80 years after it first appeared on the watchmaking scene, the Calatrava pushes the Bauhaus philosophy even further. Form is the pure expression of function and the latter must strive to get ever closer to its horological ideal of precision, stability and reliability.

The Patek Philippe Calatrava Reference 5227 (which Patek Philippe calls the “Officer and gentleman” watch) is offered in 18-carat yellow, white or rose gold (5N) and comes with a hand-sewn large-scale alligator leather strap in shiny chocolate brown for the yellow-gold version, shiny black for the white-gold version and shiny dark chestnut for the rose-gold version, each with a pin buckle in the corresponding metal.

Art Deco in the silicon agePatek Philippe’s proprietary silicon-based components are used in the newly developed cali- bre 28-20 REC 8J PS IRM C J manually-wound movement to offer a power reserve of over one week in combination with a day-date dis- play. Although such an impressive endurance is not new to the brand (Patek Philippe presented its Ref. 5100 with a ten-day power reserve in 2000), this new calibre is all the more remarkable for its ability to incorporate the energy-sapping functions of day and date display while guaranteeing a power reserve of at least 192 hours.

The Pulsomax® escapement used in the movement, which consists of a pallets and escape wheel made in Silinvar®, is friction-free, which saves energy on each contact between the pallets and the escape wheel. With the 4Hz movement producing 5.53 million such contacts over the eight-day power reserve, the energy saving is considerable. Further more, the anti-magnetic and corrosion-resistant Silinvar® is also two-thirds lighter than steel, which means that even more energy can be saved compared with a conventional escapement.

Two in-line mainspring barrels, hidden beneath a large mainspring barrel plate visible through the sapphire crystal case back, provide the necessary power for the timepiece once armed by 134 turns of the crown. Alongside this dominant feature are Patek Philippe’s distinctive three bridges for the going train and escape wheel and the generously dimensioned balance cock. All surfaces are decorated in the best Patek Philippe tradition with Côtes de Genève, chamfered and polished edges, longitudinally grained sides and gold-filled engravings.

The ensemble is enclosed in an 18-carat white- gold case of Art Deco distinction—a rounded rectangle with protruding, rounded flanks that is meticulously crafted from solid-gold bars at the company’s Geneva workshops. The time is displayed by “Dauphine” hands against polished white-gold “bâton” style hour markers on a blue or silvered dial, matched by a shiny blue or matte black alligator leather strap with a pin buckle in 18-carat white gold.