Since taking over the reins as CEO, just over a year ago, of the brand founded by her husband, Viviane De Witt has implemented a number of changes. Although a lot has been done behind the scenes to restructure the manufacture in Meyrin-Satigny on the outskirts of Geneva, the consequence of one of the boldest decisions was there for all to see at BaselWorld this year. Or rather for all not to see, since DeWitt was conspicuous by its absence at this year’s “new” BaselWorld. “The Basel fair, with the strategies employed by the large groups, does not let our subtle messages be heard, we would be drowned out,” explained Mrs De Witt. Instead, the brand’s partners were invited to the manufacture to witness first-hand the levels of craftsmanship that go into every timepiece it produces. “Once they have seen with their own eyes the complexity of the operations involved in making DeWitt movements and the number of craft professions involved in making our dials in house, once they have admired our museum of watchmaking tools from the 18th and 19th centuries, and seen the architectural beauty of our manufacture set in the Geneva countryside, this immersion in our brand will offer a fresh view of the DeWitt adventure and our watches,” Mrs De Witt continued.

Another change that we see concerns the 2013 collection that DeWitt has gradually unveiled over the first half of this year. Fittingly for a brand with imperial credentials, the models have an almost regimental consistency that is based above all on DeWitt’s signature case with its imposing imperial columns set vertically into the case middle. But beyond this, there is a harmony among the new models thanks to the use of distinctive blue and brown PVD treatments, which establish a clear identity for the brand.

Watch aficionados who hear “Twenty-8-Eight” may immediately think of a common 4Hz movement operating at 28,800 vibrations per hour. In the case of DeWitt’s Twenty-8-Eight Tourbillon, however, it would be wrong to make such an assumption, since the DW8028 calibre used in this watch beats at a more sedate 18,000 vibrations per hour (2.5Hz) and thus offers an impressive 72 hours of power reserve. In fact, as the legend goes, the watch was conceived and sketched out for the first time one August 28th, which by happy coincidence is the same date on which Mr De Witt’s famous ancestor Napoleon Bonaparte was proclaimed “Emperor of the French” by the Senate on what was the 28th day of Floréal in the French revolutionary calendar.

In its latest guise, the Twenty-8-Eight tourbillon is housed in the unmistakable 43mm DeWitt case in 18-carat rose or white gold with its imperial columns but with a special “ice-blue” or bronze PVD treatment applied to the crenellated bezel. On the new dial design, the imperial columns are echoed by two imposing Art Deco appliques in the same colour tone that rise up the dial on either side of the tourbillon carriage at 6 o’clock. The two new models are both limited editions of 99 pieces.

An even bolder, even more masculine interpretation of the imperial theme is found in the four-piece 44mm case of DeWitt’s Academia Mirabilis collection, which requires over 200 different operations to produce. It is somewhat paradoxical, therefore, that the Mirabilis is named after a flower, mirabilis japa, called the “four o’clock flower” because it opens at dusk. The allusion to this unusual flower is conveyed by an opening that takes up half of the dial, which is abruptly dissected, covering the period of dusk, twilight and night when mirabilis japa is in bloom and revealing the oscillating balance of the DW0090 self-winding calibre powering the watch, which in this case does operate at 28,800 vibrations per hour and offers a 48-hour power reserve.

The same signature touches of PVD are also used on this model for the grooved titanium bezel, whose ice-blue or bronze sheen contrasts perfectly with the ring underneath and, of course, the rest of the case, which is in 18-carat white gold for the ice-blue version and 18-carat red gold for the bronze version.

DeWitt also introduced its first steel models in the Academia collection this year in the form of two limited editions: The Grande Date and the Hora Mundi. The case takes on a certain sparkle when its strong architectural design is finished entirely in polished stainless steel (for the case, bezel ring, bezel and crown). Inside beat the DW1501 and DW2021 self-winding movements respectively, the former with big date display and the latter with a dual time zone complication. Both models feature a black dial with a sunray pattern and applied, silvered Roman numerals and production is limited to 200 pieces of each.

This year also saw the launch of the Furtive collection, whose latest arrival, the Furtive Automatic Small Seconds, further extends the brand’s first collection produced exclusively in steel. The softer lines of the 42mm stainless-steel case, with contrasting brushed and polished surfaces, frame a dial that conjures up images of a speedometer or perhaps the bridge of a ship. In typical DeWitt style and with the brand’s typical attention to detail, the dial is divided into two sections: The upper half has a classic design with a black background with sunray pattern surrounded by Roman numerals at the quarters, while the lower half, which frames the small-seconds complication at 6 o’clock, consists of rectangular metal appliques on a wood-coloured background, hinting both at a nautical or vintage automobile theme but also recalling the column motifs found on other DeWitt timepieces. One of the brand’s sportier and more individualist pieces, the Furtive Automatic Small Seconds comes on a curved multi-link steel bracelet or a black rubber strap.

With the new Classic collection, DeWitt introduces its purest and most understated design yet. Its perfectly sized 40mm diameter case in rose gold is the epitome of the classic round watch case, yet it still bears the unmistakable DeWitt imperial columns, albeit presented in a much more discreet fashion, since the case of the Classic is over half a centimetre thinner than those of the bolder Academia and Twenty-8-Eight models. The beauty of the sunray finish on the dial (in white, black or midnight blue) is in this case left undisturbed, with only the bare minimum of applied hour markers, a faint railway minute track and gold hour, minute and central seconds hands added for the display – all that is required for such a classic timepiece. Like the new Furtive model, the Classic is powered by a self-winding mechanical calibre that operates at 28,800 vibrations per hour and offers a 42-hour power reserve. Visible through a transparent sapphire crystal case back, this DW.HMS calibre has a personalised DeWitt rotor with Côtes de Genève decoration.

A touch of art in the art of watchmaking

Move beyond the reception area of DeWitt’s modern manufacture and you are met with the incongruity of a mini avenue of watch manufacturing history, represented by countless antique tools and machines from the personal collection of Jérôme De Witt. Far from simply being placed there for effect, these tools are a gentle reminder of the level of craftsmanship that the brand boasts, with various traditional artistic professions associated with the production of watches still mastered in-house. The combination of these artistic professions is loosely referred to as the “art” of watchmaking that many high-end manufacturers lay claim to mastering. 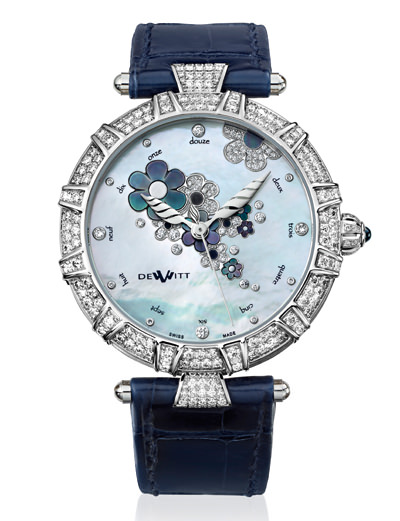 But in the case of DeWitt’s ladies’ models in particular, the timepieces are not just fine specimens of the art of watchmaking itself; they also mirror art in other forms. Witness the Pre-Raphaelite inspired Golden Afternoon collection, with its mother-of-pearl dial of floral fantasy. As much as the Pre-Raphaelites were preoccupied with fantasy and dreaminess, the Dutch Masters preferred a more rigorous espousal of the values of realism and attention to details. The jewellery version of the new Classic model is the perfect embodiment of this philosophy, contenting itself with the addition of a single row of 60 diamonds around the bezel of the understated Classic case to turn the sublime haute horlogerie piece into an exquisite piece of jewellery.

After the technical and architectural innovations of the Differential Tourbillon and the X-Watch concept watch and the dreamy fantasy of the Golden Afternoon presented in 2010, the harmony seen in DeWitt’s new models for 2013, with their contemporary and classic designs, adds a new foundation to the collection. In the figurative sense at least, Jérôme Napoléon De Witt is, as his noble ancestors once were, poised to conquer new territory. 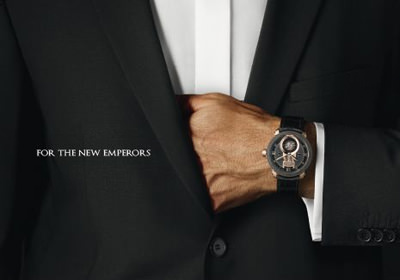 Many are the brands that can claim to have been the watchmakers to kings and queens, but few are those who can claim their own imperial birthright. Jérôme De Witt, who founded his eponymous brand in 2003, is one of ten children of Count Serge DeWitt and Princess Marie Clotilde Bonaparte. Princess Marie Clotilde Eugénie Alberte Laetitia Généviève Bonaparte was the eldest child of Victor, Prince Napoleon and the great-granddaughter of Jérôme Napoleon, the younger brother of the Napoleon. Mr De Witt takes the same first names of Jérôme Napoléon as his great-grandfather in continuation of the Bonaparte family tradition. DeWitt’s current advertising campaign, with its tag line “For the new emperors”, was launched earlier this year and is a subtle reference to the family’s ancestral heritage. The images used hark back to portraits of Napoleon, which would often depict the emperor with his right hand tucked under his waistcoat. But while Napoleon could freely choose his portrait stance (and no doubt had a pocket watch discreetly concealed in his waistcoat), the portraits of the new emperors have to abide by the laws of marketing, which means that they include both men and women, to illustrate DeWitt’s appeal to both sexes, and leave the faces of these new emperors and empresses a mystery – all the better to zoom in on the DeWitt timepieces, which are proudly displayed on the left hand tucked beneath the clothing. 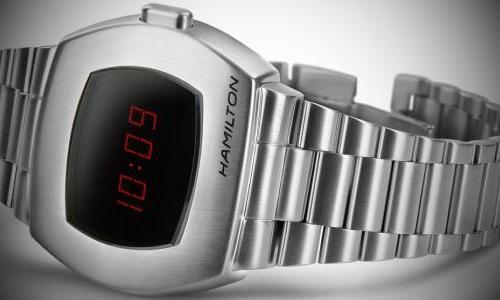 The Hamilton PSR revives the design of the very first digital watch, a space age classic that changed the way we tell time.

Openworked timepieces are an integral part of Maurice Lacroix’s history and watchmaking culture. The new Aikon Chronograph Skeleton proves it once (...)

The SUB 300 Aqua Lung US Divers builds a bridge between the past and the future. It is the first time the legendary SUB 300 comes in carbon. After more (...)

The Voutilainen 28Sport wristwatch perfectly encapsulates the philosophy of Kari Voutilainen. Its elegant and strong movement is housed in a stylish and (...)