PATEK PHILIPPE - The voyages of the Nautilus


PATEK PHILIPPE - The voyages of the Nautilus

“The devil is in the details,” as the proverb says. It’s a proverb that Patek Philippe seems to have assimilated very well, since their horological activity is anchored in this absolute cult of the tiniest detail (to the extent that the ultimate goal is probably to reverse the proposition, as the famous architect Mies van der Rohe did when he said that “God is in the details”).

As an example, take the new Nautilus Travel Time Chronograph reference 5990/1A launched at BaselWorld this year. For the first time at Patek Philippe it associates a self-winding chronograph with a dual time zone. The story of its gestation shows how the brand from Geneva takes things step by step, progressively “securing” its technological advances before incorporating them as subtly and aesthetically as possible in its different collections. This “devil in the details” approach largely explains the impression of extreme coherence throughout the brand’s collections. This coherence is the result of a kind of natural lineage that links every watch to the next, with a “dynastic” logic.

BACK TO 1997… To fully understand the amount of patient work behind this new Nautilus Travel Time Chronograph, we need to go back to 1997. This was the year when Patek Philippe launched the Travel Time watch that enriched its collection of “small” and useful complications that the brand went on to develop with considerable success. The originality of this clever Travel Time based on an original patent from 1959, which had a manually-wound movement, is essentially down to its extreme simplicity of use and the clear way in which it displays the time. 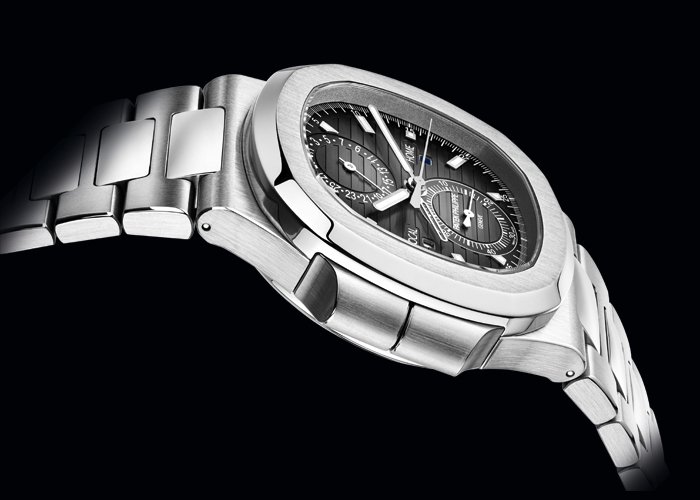 Unlike the dual time zone watches that were around at the time, the Travel Time was a beautifully classic watch (33.85mm in diameter for the gents model, which is minuscule by today’s standards, and 29.50mm for the ladies’ model) with central hours and minutes and a sub-dial with a 24-hour scale and small seconds. There are two clever aspects to the watch and they only become apparent when the dual time function is activated: the black hour hand that displays the Travel Time discreetly hides another hour hand – in gold – that moves in perfect synchrony with it. 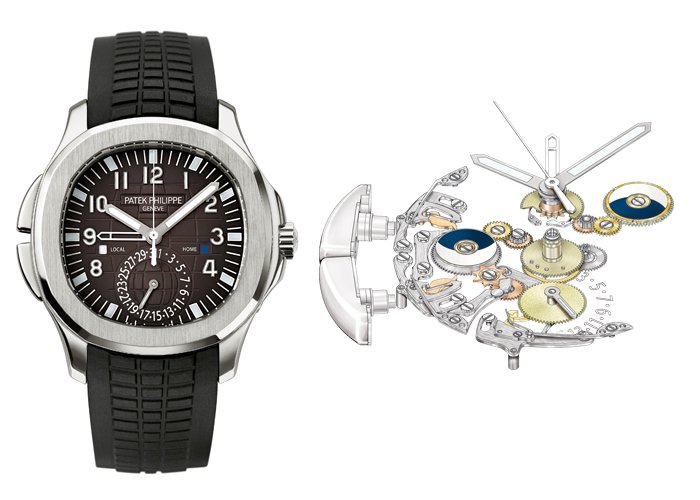 The Travel Time hand only “separates” when either of the two pusher-correctors on the case middle are pressed, when the other hand starts to display the permanent Home Time. The second technical trick is that these two pushers can then be used to move the Travel Time hand forwards or backwards – which was not possible with other dual time watches at the time, for which the hand could only be moved forwards in time. Over two years of research and development was required in order to offer this ease of use and reading.

THE ADAPTATION OF A USEFUL COMPLICATION In 2001, Patek Philippe decided to incorporate this useful complication into its flagship Calatrava collection. It thus became the Calatrava Travel Time, with a 37mm case and a large mirror-polished bezel – characteristic of the new Calatrava shape that had been presented the year before. 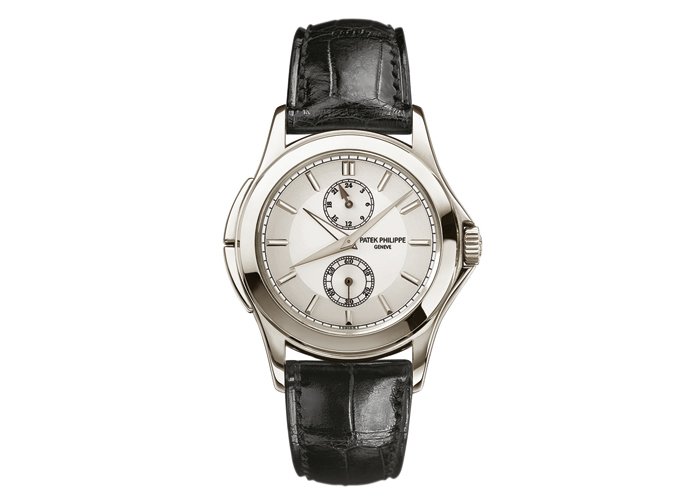 The mechanical logic of the second time zone’s operation remained identical, but for the first time a hollowed-out black hand was used instead of a gold hand. A lot of work had been done from an aesthetic point of view, in particular for the perfect integration of the two pushers for moving the local time hand forwards or backwards. Modelled on the shape of the crown protector, these two integrated pushers highlighted the classical symmetry of the piece. The movement and its meticulous finish could be admired through a sapphire crystal case back.

IN 2006, THE FIRST RETOUCHES TO THE NAUTILUS For the 30th anniversary of one of its great classics, the Nautilus “elegant sports” watch, which had become a cult object, Patek Philippe made some very slight aesthetic and technical retouches to the watch that was originally sketched out by the famous designer Gérald Genta. The case is constructed in the same spirit as the watches launched in 1976, with the system of hinges that recall a porthole and the flat gasket compressed between the bezel and the case middle. The main changes are aesthetic in nature. The “porthole” mechanism was kept for the bezel fitting. But this new design allowed some small aesthetic restyling, in particular to the two hinges, which were given a slight curve to extend the profile of the bezel (we did warn you: the devil or God is in the details!). Its elegance was improved.

At the same time, the first complications were launched in the Nautilus collection. First we saw a new self-winding chronograph movement, Patek Philippe Calibre 28-250 C, with a column wheel. Introduced in a larger Nautilus case size of 44mm, this flyback chronograph was read on a large and quite exceptional “monocounter” that displayed the minutes and hours of the elapsed time on three concentric scales. There was an enthusiastic welcome for this model, which confirmed the extraordinary attraction that this watch – as sporty and robust as it is subtle and elegant – continues to exert. In the following years more useful complications were added to the Nautilus, fully in line with the spirit of this watch, including, in 2010, an annual calendar version.

THE NAUTILUS’S TURN TO BECOME A VOYAGER For 2014 it is the turn of the new Nautilus Travel Time Chronograph, which combines in its own distinctive way the “monocounter” display of the chronograph and the easy to use Travel Time function that has gradually been perfected by Patek Philippe. In order to accommodate these two different complications, chronograph and second time zone, in the same timepiece, the brand had to develop a new calibre (CH 28-250 S C FUS). The Travel Time mechanism had to be added to the integrated chronograph movement, with its traditional column-wheel control and its innovative clutch using discs. This mechanism, as we explained above, allows the local time to be moved forwards or backwards in one-hour increment and is totally disconnected from the basic movement during these operations. So this function has no effect on the amplitude of the balance and the going rate of the watch. The date display, which, logically, is coupled to the local time and was originally displayed in a window at 3 o’clock, has been transformed into a subdial at 12 o’clock with a hand, while the chronograph’s “moncounter” has been converted into a 60-minute totaliser at 6 o’clock. 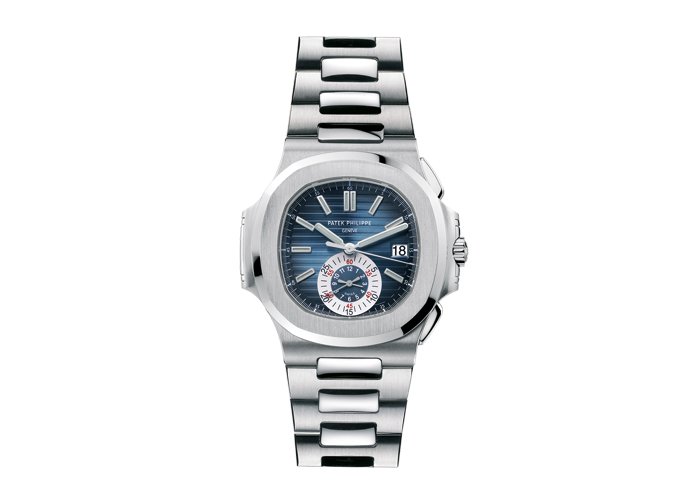 These modifications to the display have alone accounted for 47 new components. Yet the movement is only 0.3mm thicker, mainly thanks to the use of a new patented Spiromax® balance spring in Silinvar®, which beats symmetrically and isochronously on one axis and takes up much less space than the traditional Breguet spring with its raised terminal curve. Furthermore, this self-winding calibre CH 28-250 S C FUS is fitted with a central oscillating mass in 21-carat gold and beats at a frequency of 28,800 vibrations/hour and has the Gyromax® that was already invented by Patek Philippe (1949) over 60 years ago! Its superlative finish – Côtes de Genève on the hand-bevelled bridges, circular graining on the oscillating mass – can be seen through the sapphire crystal case back.

AESTHETIC AND TECHNICAL FINESSE But integrating this new Travel Time function inside the Nautilus chronograph also required detailed work on the famous porthole-shaped case. Yet this case, with its two lateral protuberances, offered the ideal form for incorporating the two extra pushers that were needed for the Travel Time function. The right-hand protuberance acts as a protection for the two chronograph pushers, which were brought closer to the crown so that they act more directly on the mechanism. From an ergonomic point of view, these pushers have “a softer feel and a firmer action”. On the left, the original protuberance has been replaced by two pushers that mimic its shape exactly. Despite these new perforations, water resistance is still guaranteed to 120 metres (12 bar). 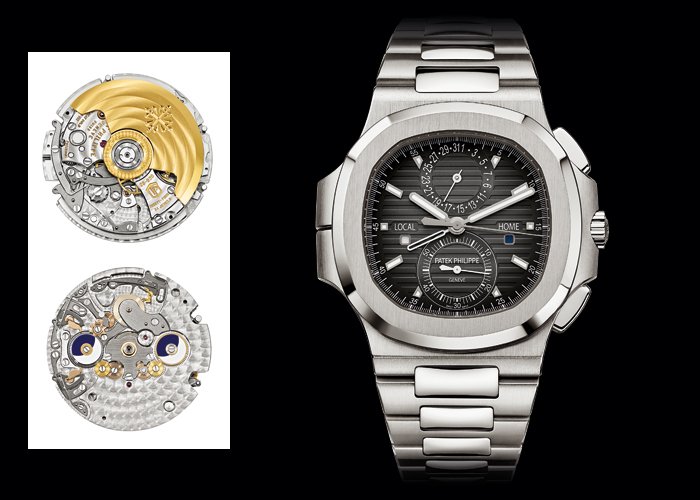 We also find the famous Nautilus steel bracelet with foldover clasp, characterised by its polished central links that punctuate the taper of the brushed lateral links, that offers unparalleled comfort on the wrist. The addition of the Travel Time function also required a rearrangement of the indications on the dial, which nevertheless maintains all the identifying signs of the Nautilus collection: an embossed horizontal relief, a slightly graduated colour tone that gets lighter closer to the centre of the dial, applied hour markers in white gold covered in luminescent material and a perfect symmetry to the whole.

At 12 o’clock we find the new date dial with a hand, which mirrors the chronograph’s 60-minute counter at 6 o’clock. On the central horizontal axis we find two small day/night indications, for the Home Time at 3 o’clock and for the Travel Time at 9 o’clock. The local time is displayed by a baton style hand, with a luminescent coating, while the home time is displayed by a hollowed-out hand. “Everything that a man expects from a watch”, say the makers of this new timepiece that undoubtedly marks an important stage in the Nautilus saga.