For the Ancient Greeks, hybris (also referred to as hubris) was a flaw. It was a sign of immoderation, of excess, of the pride of Man in defying the Gods. By regrouping its most striking mechanical accomplishments under the provocative name of Hybris Mechanica, is Jaeger-LeCoultre displaying immoderation, excess and pride? While one might be tempted to suspect as much, the Master Ultra Thin Minute Repeater Flying Tourbillon, the 11th creation to take its place in this highly exclusive family of Hybris Mechanica is there to prove the exact opposite. Because sometimes “excess” is in fact an absolute quest for “due measure”. Such is indeed the case here, as we will attempt to demonstrate. 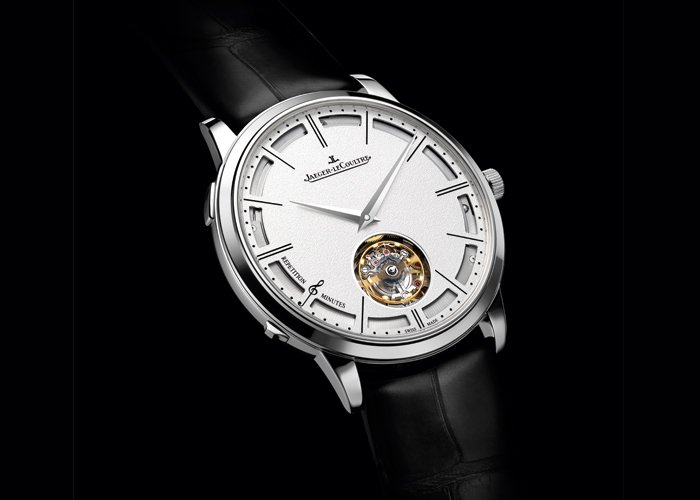 Everything about this exceptional timepiece converges towards a central goal: that of expressing outstanding mechanical complexity in a supremely simple, pared-down and slender form – the aim being to open up a new era for Grande Complication models: one of exceptional slimness and finesse. Beneath the pure, uncluttered face of the Master Ultra Thin Minute Repeater Flying Tourbillon, and between its taut, slim shapes, beats a masterful automatic movement measuring just 4.8 mm thick and which fully lives up to its ultra-thin epithet and combines a flying tourbillon with a minute repeater. With a total thickness of just 7.9 mm including the watch glass, the Ultra Thin Minute Repeater Flying Tourbillon is indeed the thinnest minute repeater in its category. However, accomplishing this, heralding a new chapter in the grand saga of mechanical horology – the era of ultra-thin Grande Complication models – and achieving such excellent “due measure” called for the hybris of an extremely long history. A history marked by the progressive accumulation of skills and knowledge through a steady stream of inventions and innovations. The objective of slenderness, especially for a Grande Complication watch, implies overcoming a whole series of obstacles relating both to technical horological factors and to the art of creating a perfect exterior. One hundred years of practice in the field of ultra-thin watches are none too many to succeed in overcoming all the difficulties implied in such a process.

THE LONGSTANDING QUEST FOR SLENDERNESS

The story of this quest for slenderness began in Paris in 1907. Two men – Edmond Jaeger, a Parisian entrepreneur; and Jacques-David LeCoultre, a watchmaker from the Vallée de Joux – had just created a “knife-shaped” pocket watch housing LeCoultre Calibre 135 measuring just 1.38 mm thin. This absolute record in its era was Jacques-David LeCoultre’s horological response to the challenge set by Edmond Jaeger four years earlier: to create the thinnest and most reliable possible watch – in fact the thinnest in the world. 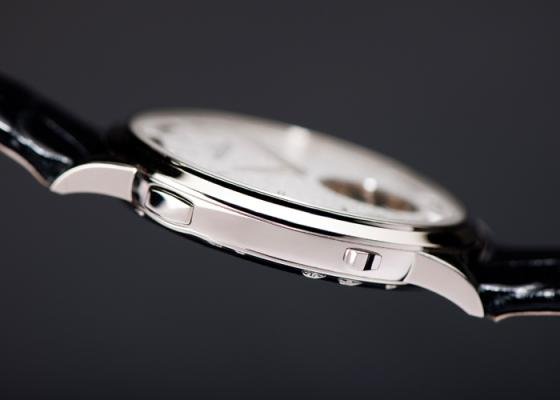 This was to be the starting point in the epic pursuit of slenderness; the first in a long series of ultra-thin movements that would make their mark on the history of Jaeger-LeCoultre and that of the watch industry as a whole. It is well worth highlighting the very first movements that began this proud lineage: LeCoultre Calibre 136 with minute repeater (1907); Lecoultre Calibre 6EB, the first ultra-thin rectangular movement; as well as LeCoultre Calibre 11CCVEP, an astonishing ultra-thin chronograph (1908). Throughout its history, the Manufacture Jaeger-LeCoultre has relentlessly pursued this horological quest that is undoubtedly one of the most fundamental in this discipline – since anyone dealing with thinness must also address another vital horological principle: that of reliability. Case and movement, functions and functionality, construction and the watch exterior thereby all stem from the same construction intent.

The new Master Ultra Thin Minute Repeater Flying Tourbillon surpasses all that has gone before and represents a crowning accomplishment that is a compendium of avant-garde innovations.

While the new Master Ultra Thin Minute Repeater Flying Tourbillon is indeed the fruit of this history, it surpasses all that has gone before and represents a crowning accomplishment that is a compendium of avant-garde innovations (protected by eight patents, including six new pending patents). These innovations relate to the precision of the watch, its reliability, the unusual architecture of its flying tourbillon, to the strength and crystal-clear tone of the sound it emits, the striking mechanism activation and winding system, the taut architecture and the finishing of its movement, and naturally also to its intrinsic slenderness.

Let’s begin with the tourbillon. Far from being a classic construction, its highly original architecture not only enables reduced thickness, but also ensures complete visibility of this steadily rotating organ. It is in fact a flying tourbillon featuring a flying-type balance wheel: a world first in itself. In a traditional tourbillon, the balance wheel is held inside a carriage supported by an upper bridge; whereas this brand-new flying tourbillon entirely does away with any upper bridge. The carriage has apparently vanished, reduced to an absolute minimum and positioned at the back of the balance wheel, which therefore appears to by “flying” through space in solitary splendour. This unusual architecture provides a spectacular plunging view into the heart of this system with its steadily beating, magnificently blued balance spring. This entirely hand-crafted, high-performance cylindrical balance spring is equipped with two terminal curves ensuring perfect concentric ‘breathing’ and thus extreme precision (patent registered). The avant-garde nature of this model does not stop there, since accommodating an automatic winding system within an ultra-thin case is a tough challenge that implies entirely rethinking the structure of the movement. The automatic winding system designed to power the Master Ultra Thin Minute Repeater Flying Tourbillon is of the peripheral type. The winding is thus handled by a platinum ring mounted on a “huge” circular ball bearing mechanism that no longer oscillates beneath the movement, but instead around it. This constantly oscillating ring is visible through the openings dotted around the rim of the grained silver-toned dial.

This ingenious peripheral oscillating weight system paved the way for another innovation. Minute repeater mechanisms are generally wound via a trigger or slide-piece placed on the side of the case. In this model, the traditional slide-piece is replaced by a retractable single pushbutton measuring just 2 mm thick (registered patent). This retractable winding pushbutton located at 10 o’clock on the side of the watch is secured by a tiny latch at 8 o’clock. It is discreet, ergonomic, serves to wind the striking mechanism in just one push, guarantees perfect water resistance (3 atm), as well as offering the additional aesthetic advantage of keeping the case entirely smooth, slim and perfectly rounded.

THE SCIENTIFIC QUEST FOR THE BEST POSSIBLE SOUND

This retractable pushbutton winds a minute repeater that is also a concentrated blend of innovations relating to the power of the sound emitted, to its quality, as well as to the rhythmical simplification of the sound sequences. A traditional minute repeater sounds the hours, quarters and minutes in that order. At 08:17 for example, it will strike the hours gong eight times, the quarters gong once, and the minutes gong twice. However, at 08:12, in the absence of quarters, such a traditional repeater will strike the hours gong eight times, pause to “let the quarter slip by” before striking the minutes gong 12 times. In the new system developed by Jaeger-LeCoultre, this “silent timelapse” between the hours and minutes is simply eliminated, thereby offering the very first uninterrupted and entirely logical auditory time reading. The power and the quality of the sound thus emitted have also been the object of intense acoustic research that the Manufacture has been conducting in a strictly scientific manner for several years already. 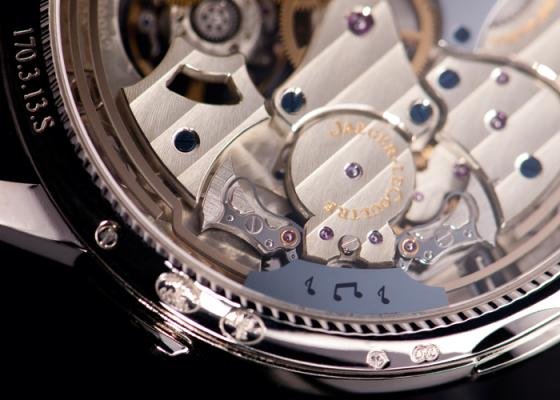 Traditionally, the sound is made by a simple hammer striking the gong, off which it rebounds. In this instance, this strike has been optimised by means of duly patented trebuchet hammers, inspired by medieval catapults of which the strength was strongly increased by the mobile section containing the projectile. Due to this system of trebuchet hammers, the strike is clean, without any rebound and with higher energy transmission (80% compared with just 10 to 30% for a classic hammer). Moreover, these hammers strike all-of-a-piece gongs with a square rather than round cross-section, thereby increasing the surface in contact with the hammer and ensuring unprecedented strength of the sound thus emitted. The transmission of this sound is further enhanced by a crystal gong directly welded to the sapphire crystal to which it directly transmits its vibrations – sapphire being an excellent conductor. The result is a sound effect of exceptional quality that truly deserves to be called crystal clear.

A TRIBUTE TO TRADITION

Crafted, assembled and decorated by hand, the mechanical automatic Jaeger-LeCoultre Calibre 362 powering the Master Ultra Thin Minute Repeater Flying Tourbillon and measuring just 4.8 mm thick, represents a considerable sum of innovations, as well as referring to the longstanding, noble tradition of Jaeger-LeCoultre’s historical pocket watches. The ebauche and the bridges are made of maillechort, a prestigious copper-nickel-zinc alloy distinguished by its propensity to acquire a magnificent patina over time. Evidenced in the Haute Horlogerie finishes of its parts, the Côtes de Genève decoration of its various bridges, the entirely hand-crafted bevelling (including complex tradition interior angles), the extreme care devoted to the aesthetic appearance of this movement is entirely in tune with the historical traditions of the Manufacture. 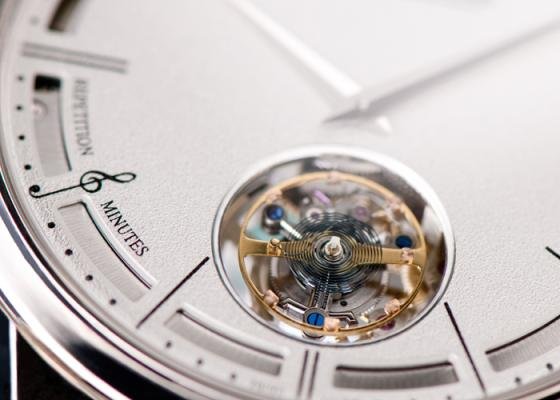 This elegant and majestic ultra-thin movement is housed within an ideally proportioned case measuring 7.9 mm thick and 41 mm in diameter. This case is made of 18-carat extra-white gold, a choice that is both aesthetic and functional in that white gold is renowned for its excellent acoustic qualities. The bezel, the sides and the streamlined lugs are all entirely polished by hand. The perfectly classical, understated dial also evokes the historical lineage and the aesthetic similarities with the pocket watches from the Manufacture. The traditionally transferred black minute circle and hour-markers stand out clearly against the silver-toned grained finish of the dial bearing new, subtly longer, delicately crafted, polished and grained Dauphine-type hands. The ultra-thin flying tourbillon is theatrically displayed at 6 o’clock, while the rim of the dial is drilled with small regular openings serving to observe the rotations of the circular oscillating weight segment in finely snailed platinum. Setting the perfect finishing touch, the welded contact point between the gong heel and the sapphire crystal is delicately marked with musical notes.

Available in a 75-piece limited edition, this Hybris Mechanica 11 is fitted with a high-end alligator leather strap secured by a pin buckle.

“Excess” – hybris – is indeed finely concealed beneath an exterior worthy of the most classic forms of due measure.