RJ-ROMAIN JEROME: beyond life and death


The fearless independent Swiss brand pays tribute to the Mexican Day of the Dead, as a way of reframing the codes of Haute Horlogerie. The evocative power and stylistic accomplishment of the Día de los Muertos collection will enchant watch connoisseurs and aesthetes alike.

RJ-ROMAIN JEROME: beyond life and death

The fearless independent Swiss brand pays tribute to the Mexican Day of the Dead, as a way of reframing the codes of Haute Horlogerie. The evocative power and stylistic accomplishment of the Día de los Muertos collection will enchant watch connoisseurs and aesthetes alike. 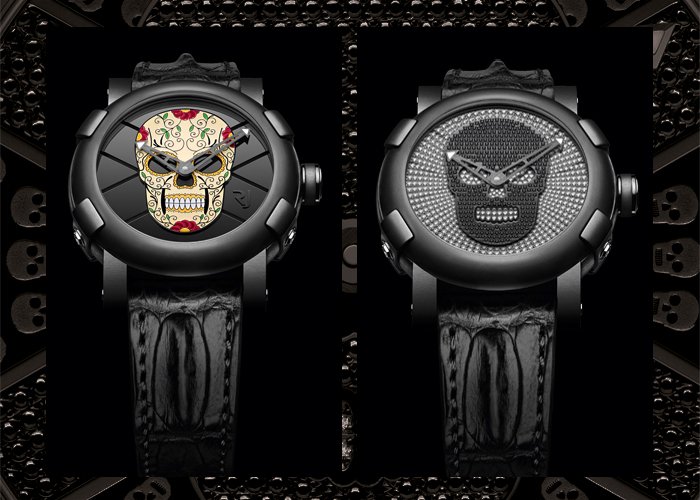 here is no doubt that RJ - Romain Jerome is reinventing the codes of Haute Horlogerie, under the direct influence of its CEO, Manuel Emch, who is also its artistic director and an art lover. The Día de los Muertos collection is a prime example.

Inspired by the Day of the Dead, a festival celebrated in Mexico every year on the 1st and 2nd November, the watchmaking house has recruited tattoo artist Xam to decorate its watches with sugar skulls, an interpretation of the ‘calaveras’ in sugar paste that Mexicans give as gifts during the festivities. The result is the colourful floral motif that has defined the identity of the Día de los Muertos collection since the first models were launched in 2012.

In Mexico, as is the case in many countries around the world, death is celebrated with humour and irony, and the deceased’s passage into the afterlife is eased with song and dance. It’s a fertile source of inspiration for any timepiece designer, but RJ - Romain Jerome brings its own particular aesthetic and unique viewpoint, giving the theme a global resonance. The timepieces in the four Día de los Muertos collections, three of which are in limited editions of 25 pieces, with the fourth limited to 99, steer clear of cultural stereotypes, instead playing deftly with the intrinsic irony of the skull, which strikes a chord in everyone, regardless of cultural origin.

A SENSE OF CONTRAST 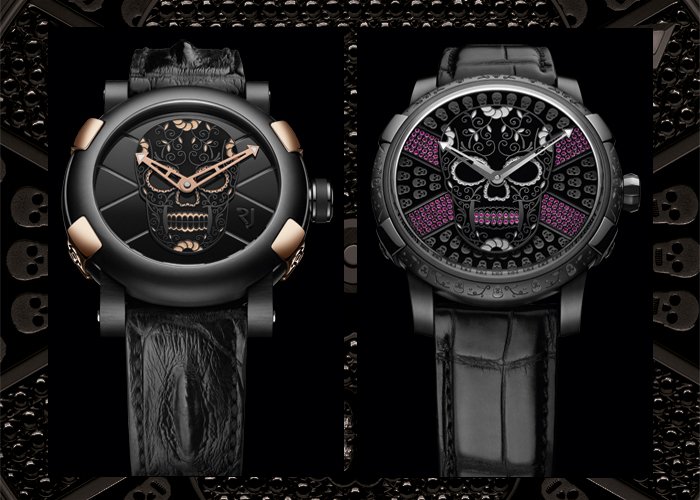 RJ - Romain Jerome is an unchallenged master at seamlessly integrating the memes of popular culture into the technical and ultra-precise world of Haute Horlogerie – a risky endeavour that the company has already brilliantly executed in models such as the Batman-DNA, Space Invaders and the entire Steampunk line. Here too, this joyful reinterpretation of the vanities is imbued with a rare aesthetic power, the result of the felicitous contrast between the skull and its background, enhanced by an astonishing sense of detail.

The finish of the black PVD-coated steel case and bezel claws recreate the brand’s emblematic X, which can be seen on all of RJ - Romain Jerome’s timepieces. The hour and minute hands are satin-brushed and tipped with ‘blue emission’ superluminova. The black Hornback alligator strap also plays its part in reinforcing the contrast between the watch’s darker and more mysterious elements and its vibrant skull applique.

The automatic heart of these models, strictly Swiss made and assembled in the company premises in Geneva, does not disappoint, its robust efficiency stopping just short of hinting at immortality. The latest series, the Día de los Muertos Clásico, offers a slightly smaller case size of 43 mm, compared with its predecessors’ 46 mm. Apart from their size, the three models in the collection share a bezel and dial engraved with ‘calaveras’ and other motifs reminiscent of the festival. The retail price of the collection ranges from CHF 14,950 to CHF 39,950.

The skull has become an icon of popular culture – one only has to look at Damian Hirst’s platinum skull set with 8,601 diamonds, Alexander McQueen’s fascination with the motif, or Scott Campbell’s skull sculpture made up of 11,000 dollar bills. We now have to factor in RJ - Romain Jerome’s contribution; the partnership between Manuel Emch’s team and tattoo artist Xam has cemented the place of the now iconic watches in popular culture, and promises many more fascinating explorations of this (paradoxically) deathless theme in the future.