The peak of craziness


The peak of craziness 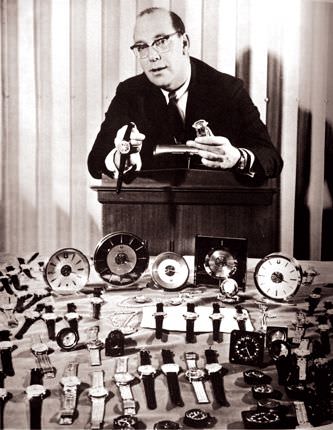 During my childhood, the word ‘watchmaking’ evoked an exclusively masculine universe, one that was technical, severe and rigorous. We imagined groups of men, with rather grey expressions, clad in their grey work clothes, working very long hours inside ateliers that looked out over an equally grey countryside, snowed in, all alone.
In those days, watchmaking was anything but ‘sexy’ to a child, even one fascinated by the noisy gears of a large alarm clock that implacably ticked away the minutes and hours on his bedside table.
To receive a watch, ‘his’ watch for a lifetime, was a rite of passage that marked a child’s entry into the age of reason. To proudly wear a watch on his wrist meant that he was entering the world of ‘responsible’ adults, who master duties and schedules, masters of their own time.
The watch world was thus an adult world, a somewhat austere world, alluring and frightening at the same time. To a child who dreamed of faraway lands, it was a down-to-earth world, pragmatic, common, dominated by everyday activities.
If this same child were to wake up today, he would not, but not at all, have the same impression of ‘watchmaking.’ His favourite people – sports figures, aviators, singers, actors, rappers, action heroes – would be all over his walls, on television, and in magazines, triumphant and colourful, and all wearing large watches covered in diamonds or pushbuttons.
The child would also see lovely and half-naked creatures showing off the beauty of a small jewel wrapped around their wrists. He would see, much to his surprise, a river of diamonds and the most unexpected forms and colours, a far cry from the great austerity of ‘his’ watch of yesteryear.
If by chance, he should enter the door of a watch ‘show,’ he would be wide-eyed with amazement before the magnificence of the three-tiered stands, manned by efficient young people flitting around with a mobile ‘phone in one hand and a glass of champagne in the other.
Has watchmaking gone crazy, he would ask himself.
No, watchmaking has not gone crazy. Is it then the world that has gone crazy, he wonders.
During the last 15 years, the watch industry has undergone a spectacular transformation. It has not only rehabilitated a technology that is historically out of date (mechanical timekeeping), but it has also created a global appetite for this little jewel that tells (more or less precisely) the time. Today, everyone is crazy about watchmaking.
In passing, the strictly time-telling function of the watch has totally lost its importance. It is now only a pretext, a pretext to poetical and mechanical exploits, formal or bejewelled. Today, this swirling creativity has reached the summits… of baroque. Everything and anything is possible.
But wait, in this timely cave of Ali Baba, we can already see a return to a more stricter, more sober type of watchmaking. It is a return to the tree of classicism that the forest of extravagance is still hiding from most observers. Whether we can see it or not, the tree is there.
No, watchmaking will not return to the masculine and ‘grey’ universe that it once was. And, so much the better.
Yet the pendulum of ostentation and extravagance has reached its apex and is now beginning to swing in the other direction as watchmaking reaches its equilibrium.